The Creel Commission Would Be Pleased

State propoganda is still being used as fuel for the United States war machine. 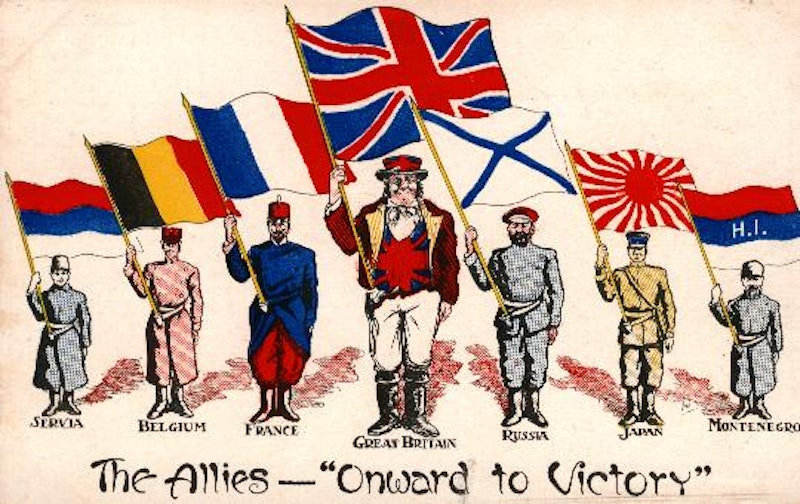 The majority of respondents, 32 percent, picked Iran—followed by China at 23 percent, North Korea at 10 percent, Afghanistan at seven percent, Iraq at five percent, and Russia and Pakistan both at two percent. One percent of respondents said the United States was its own worst enemy.

Americans most frequently mentioned Iraq as the United States’ greatest enemy in 2001 and in 2005, when it tied North Korea. Iran has topped the list in each of the five surveys since. In the most recent survey, China was mentioned as an enemy more often than any other time, likely because of its growing global economic influence. Gallup attributes Americans’ growing distaste for Iran to its public announcements of its nuclear capabilities, belligerence against the United States and Israel, and threats to disrupt the flow of oil in the Mideast.

However, let’s not forget that the entire infrastructure of propaganda in America has been increasingly beating the Iran war drums mostly without question as they did with Iraq prior to the 2003 invasion. It’s the specter of the “Evil Empire” under less jingoistic phraseologies, as if George Bush were still in office. The Empire will not, now or ever, dismantle itself on its own. Military spending will not actually be cut, our bases may be rearranged and prioritized, but the numbers will not be very different. All of this is a delusion. The Creel Commission would be pleased if its members were still with us.

Let me begin by counter-posing two different conceptions of democracy. One conception has it that a democratic society is one in which the public has the means to participate in some meaningful way in the management of its own affairs and the means of information are open and free. An alternative conception of democracy is that citizens must be barred from managing their own affairs and the means of information must be kept narrowly and rigidly controlled. That may sound like an odd conception of democracy, but it's important to understand that it is the prevailing conception.

For example, in order to enter World War One, against the overwhelming anti-war sentiment of the time, Woodrow Wilson’s administration established a government propaganda arm, called the Creel Commission, which succeeded, within six months, in turning a pacifist nation into a hysterical, war-mongering population that wanted to destroy everything German, tear the Germans limb from limb, go to battle and save the world.

That was a major achievement, and it led to further aggression. At that time and after the war the same techniques were used to whip up a Red Scare, as it was called, which succeeded pretty much in destroying unions and eliminating such dangerous problems as freedom of the press and political thought. There was very strong support from the media, from the business establishment, which in fact organized, pushed much of this work, and it was in general a great success.

Among those who participated actively and enthusiastically were the progressive intellectuals, people of the John Dewey circle, who took great pride, as you can see from their own writings at the time, in having shown that what they called the "more intelligent members of the community," namely themselves, were able to drive a reluctant population into a war by terrifying them and eliciting jingoist fanaticism. The means that were used were extensive. For example, there was a good deal of fabrication of atrocities by the Huns, Belgian babies with their arms torn off, all sorts of awful things that you still read in history books.

The British propaganda ministry, whose own commitment at the time, as they put it in their secret deliberations, was “to control the thought of the world,” invented all this. But more crucially they wanted to control the thought of the more intelligent members of the community in the U. S., who would then disseminate the propaganda that they were concocting and convert the pacifist country to wartime hysteria.

That worked very well. And it taught a lesson: State propaganda, when supported by the educated classes and when no deviation is permitted from it, can have a big effect. It was a lesson learned by Hitler and many others, and it has been pursued to this day.

Recently, the game plan was to take out Libya, disrupt Syria, which as an Iranian puppet state posed an existential threat to Israel if Iran were attacked. Egypt is now firmly in the hands of the army, and despite all of the “visible” media rhetoric that it’s moved away from Washington and is jeopardizing billions in military aid, we will see little, if any, reduction in American dollars flowing to this key Arab military power. They will likely quell any street uprisings with the same force as the rulers of Bahrain have with their own “Arab Spring” uprisings, of course with the full backing and military support of the US government. The setup is all being put into place, and the noose is tightening.

There will be war without an internal Iranian revolution first, something we did orchestrated years ago to a democratically elected government under the direct actions of the CIA, only to have the Iranian President replaced by the Shah and his secret police. Nations’ memories have a longer shelf life than the individuals that comprise it.

In the meantime, from one who totally underestimated the power of the combined strength of central banks providing massive liquidity injections in unison, I remain as concerned by what I see going on in this country as I have ever been.