That's not going to work. 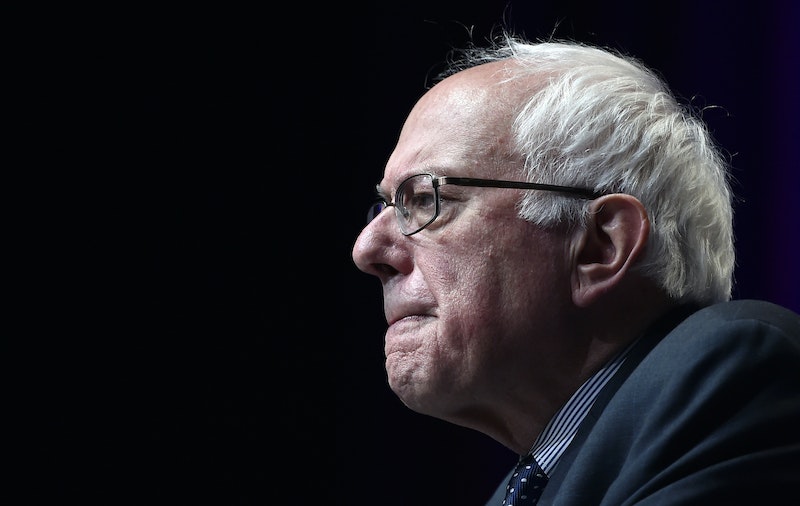 Ever since the permanent underclass known as slaves were enshrined in the Constitution, class and race in the U.S. have been intertwined. For the progressive left, this has resulted in an ongoing tactical argument. People on the left oppose both racism and poverty, but which do you address first? Should you focus on poverty, knowing that this will help black people, who are disproportionately poor? Or should you focus on eliminating racism, knowing that this will help poor people, who are disproportionately black?

Bernie Sanders, running for president as an anti-establishment candidate, answered those questions as the Democratic establishment traditionally has over the last few decades. That answer: focus on poverty first. Sanders, with admirable forthrightness, declared at an Iowa forum that he does not support payment to black people for past injustices, or reparations. "The likelihood of getting [reparations] through Congress is nil," he argued, and added that, "I think it would be divisive." Instead of payments to black people directly, Sanders called for "massive investments in rebuilding our cities"—a plan that would target urban poverty, and thereby, Sanders implied, help black people.

That sounds reasonable. The problem, as Ta-Nehisi Coates outlined at The Atlantic is that historically its record has been mixed at best. U.S. anti-poverty programs in the past haven't done a great job of combating racism.

As perhaps the most glaring example, FDR's New Deal was focused on reducing poverty during the Great Depression. Programs like the Works Progress Administration (WPA) were set up to reduce unemployment by creating public works jobs. Around 350,000 of those jobs, or 15 percent of the total, went to African-Americans. The Public Works Administration (PWA) included quotas for hiring black laborers. Poverty. This seems like the model for Sanders' plan; put government money into helping the poor, and a good portion of that money will go to black people.

But unfortunately, in a lot of ways the New Deal actually served to entrench black people's status as second-class citizens. The Federal Housing Administration's practice of denying mortgages to people living in integrated neighborhoods entrenched segregation, helping to create balkanized black communities which could be, and still are, denied investment and services by city bureaucracies. More, on a national level, most New Deal programs were passed with Southern votes explicitly on the grounds that they not threaten Southern apartheid and white supremacy. In 1944, the South even blocked legislation to allow black soldiers from Southern states to participate in the national election. That bill was introduced by Southern Democrats, but backed by Republicans, who feared that black soldiers would vote for Roosevelt. This was one of the initial steps in Republican embrace of white identity politics—and foreshadowed the political realignment that continues to hinder racial justice to this day.

So anti-poverty programs have, at best, a mixed record of contributing to the liberation of black people. What about the record of anti-racism in addressing poverty? The largest movement to liberate black people also indisputably had the greatest effect on reducing inequality in the United States. In ending slavery, the Civil War both freed black people and ended the most unequal, not to mention inequitable, labor relationship in U.S. history. The Civil War didn't end poverty (or racism), but by targeting the most egregious manifestation of white supremacy in America, it also did away with the most vicious system of enforced poverty and class exploitation.

The Civil War was, of course, catastrophically divisive. Anti-racism was, and remains, controversial. And in fact, the difficulty of confronting racism also makes it difficult to confront poverty. Welfare was consistently attacked using the racist image of Welfare Queens—animalistic, lazy, breeding black women, who were supposedly robbing the state to pay for their irresponsible lifestyle. When Bill Clinton scuttled Welfare in the 1990s (with Hillary Clinton by his side) he was abandoning the poor—but he was abandoning them to no small extent in order to cater to racism. If Sanders thinks that his plan for aid to cities will somehow avoid racist opposition, he's out of his white-haired mind.

White progressives have long dreamed of making an end run around racism—of uniting the poor of all races and colors in a single, joint assault on the real problem, which is defined as poverty and class inequity. But in America, there’s never been anywhere to run from racism. If America can't provide black people with justice, it's not going to be able to negotiate the poisonous racial politics around class issues either. Maybe reparations are politically impossible. But as long as that's the case, Sanders’ vision of socialist change is going to be impossible too.