As if David Cameron wouldn’t meet with a President Trump. 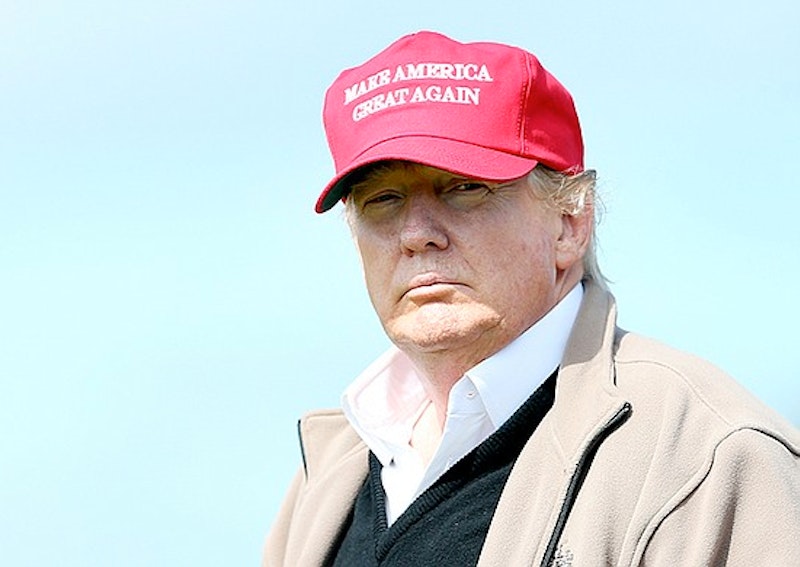 So far, over 570,000 U.K. citizens have supported a petition calling for Donald Trump—possibly America’s next president—to be banned for the offense of saying that Muslims should be prevented from entering the U.S. (not the U.K.) for the time being, and British MPs debated the matter for three hours on Monday.

The debate was essentially an empty exercise—there was no vote upon its conclusion—as it's Home Secretary Theresa May, not MPs, who makes the call on keeping undesirables out. Trump certainly can't be too concerned, and if May ever decides to slam the door on him, he'd probably find a way to use it to his own advantage, an irony almost certainly lost on the petition’s signees.

During the debate, MP Tulip Siddiq, a Muslim, spoke confusingly of freedom of speech sometimes “insulting public safety” and made the unsupportable claim that Trump’s rhetoric in the presidential campaign has led to an increase in anti-Muslim hate crimes in the U.K. Historically, free speech has never been a particularly valued principle in Muslim society, where “incorrect” speech is often harshly punished (sometimes with death), so Siddiq’s views are not inconsistent with her background.

MP Tasmina Ahmed-Sheikh, speaking in favor of a Trump ban, said that his comments have been offensive about women, Mexicans and people with disabilities, without explaining how keeping him off British soil would put an end to such deprecations. MP Anne McLaughlin, grandstanding, chose to quote Martin Luther King, on MLK Day: ”The ultimate tragedy is not the cruelty and oppression by the bad people but the silence over that by the good people. We won't be silenced.” In her mind, not banning Trump is tantamount to being “silenced.” Engaging him in a debate is not an option. MP Jack Dromey, exhibiting his total ignorance of Trump, said, “Imagine what would happen if he came to Birmingham or Glasgow and preached his message of hate.” I can assure Dromey that if Trump ever does make it to Birmingham or Glasgow, it will be to make money, and you can be sure he won't be bringing up politics.

Those who realize that free speech also involves defending speech an individual may find offensive mentioned things like the fact that Trump has not gone so far as to incite violence or criminal acts. Conservative MP Tom Tugendhat, while saying he thinks Trump is “crazy,” said it's bad politics to interfere with an American election, and that's it's up to the American people to hold the real estate mogul accountable. Others made the point that Trump should be invited to the U.K. to have his views challenged, so he could point out the “no go” zones he claims exist in some cities, where even the police dare not enter.

Trump—like the American fondness for guns—freaks out the people of the U.K., and this debate gave interested MPs a chance to express their utter disdain for the billionaire (“crazy,” “buffoon,” and “wazzock” were some of the words used), while suggesting various remedies. One of the reasons Trump has this effect on the Brits is that, in their current culture of strict political correctness, it is taboo to criticize Islam in any way, as Muslims are a protected group identified as “victims.”

To gain some context on the current U.K. political climate, take a look at how long it took the BBC to report that a mob of approximately 1000 North African and Arab Muslim men gathered in Cologne, Germany on New Year’s Eve in a planned mass attack on women, something reminiscent of when female journalists were sexually attacked in Cairo during the so-called Arab Spring in 2013. However, the nation’s most important media outlet, in abdication of all journalistic principles, did its best to suppress the Cologne story, because it portrays a protected group in a very poor light.

It's hardly surprising that in such an atmosphere of suppression, where a story about women brutalized by hundreds of drunken men is considered too dangerous to report on, that the U.K. is considering banning Trump. Still, it's unlikely that Theresa May will tell him to stay out. Prime Minister David Cameron has already said banning Trump is a bad idea, and even the far-left Labour leader Jeremy Corbyn agrees with him. The approximately 500,000 who signed the petition are probably the same people who didn't want the Cologne story reported, so they're not really worth paying much attention to. They don't believe in free speech for those they disagree with, and they speak of “public safety” and “harmony” only when it’s convenient for them.