The Real Larry Hogan Has Yet to Reveal Himself 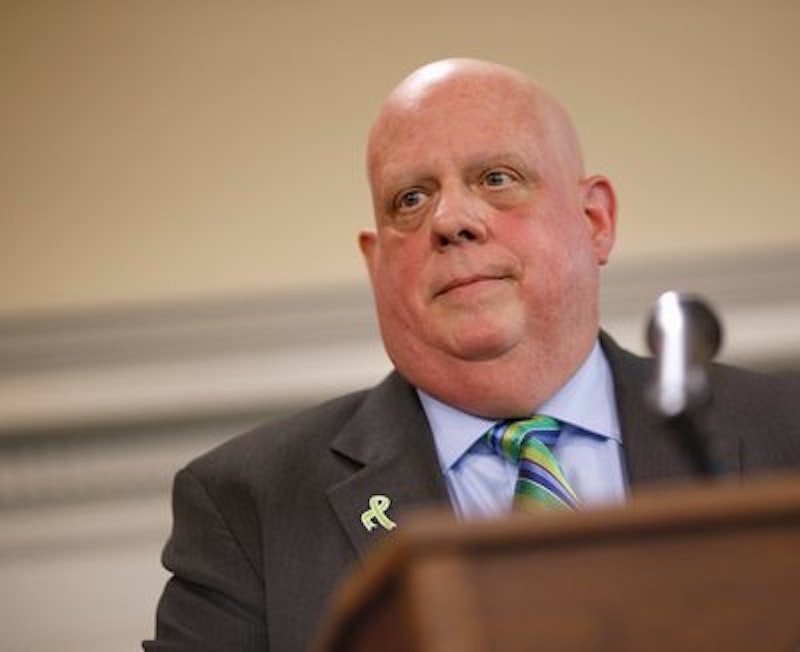 Budgets are about more than numbers. They’re a form of autobiography. They say what an administration does and how it treats the people it governs. Budgets can be high-minded and principled or they can be devious, too, hueing to an ideological bent or books cooked to make a point.

Budgets have consequences. They’re the sum total of everything a governor does and a measure of the quality of life in Maryland. In his latest budget, Gov. Larry Hogan (R), as promised, has laid it on the line: He wants back total control of the budget that the General Assembly has, over the past 40 years, quietly snatched from the executive branch.

To place the gamble in perspective, Hogan, in the latest Gonzales Research poll, drew an eye-boggling 67 percent job approval rating. But those aren’t the numbers that count. The ones that do are 71 votes in the House and 24 votes in the Senate. A governor who has those in his pocket gets things done. The early-bird betting is that Hogan will come up short. (Object lesson: The legislature overrode five Hogan vetoes leftover from the 2015 session and has scheduled a vote on a sixth.) Hogan’s picked a fight that’s calculated to impress his conservative constituents more than the Democratic Assembly.

Hogan’s budget really does no harm. In fact, it grows at a modest four-and-a-tad percent over last year. It should, by most accounts. Maryland is in very good shape for the first time since the 2008 economic collapse with a comfortable surplus of $450 million. And that figure sets up another protocol standoff—how to spend the sudden and unaccustomed riches. In the State House, having too much money is often more problematic than not having enough. Saying no is easier than choosing among the many worthwhile projects that will be advanced and on the table.

The budget totals $42.3 billion in general, special and federal funds, with $17.1 billion of that in state income and sales taxes and gambling proceeds—largely the general fund operating portion. And it contains Hogan’s promise of tax and fee reductions, $37 million as the first installment of the $480 million in tax relief that he promised over five years. The cuts are supposed to ease the tax burdens on families, small business and retirees, although many retirees pay minimal or no taxes. But Hogan has also decided to stash money into the state pension fund and the rainy day fund instead of expanding programs that make Democrats’ hearts go pitter-patter.

So what’s the rub? Conservatives have bellyached about mandates for years as part of their crusade against big government or, in fact, most government. Ideally, they’d like to take government back to its limited primal origins of defense and commerce. More to the point, their ire is directed at the social welfare programs that mandates were designed to protect. But Hogan has left no fingerprints in that category: He’s followed the requisite formulas and increased spending on health care and education by prescribed amounts to soften the General Assembly for the fight.

Two explanatory footnotes are important here to illuminate the point. Maryland has the strongest executive budget system in the nation. The governor has (or had) almost total control of all budgetary spending. For the legislature to increase spending or introduce new programs, the money must come from the governor or a new funding source, which is nearly impossible. The legislature can cut the budget but not increase it, though can it shift funds among programs, a maneuver it was previously prohibited from doing. Maryland adopted the executive budget system in 1917 after the legislature spent the state into bankruptcy.

Mandates became popular in the 1960s-70s at the federal level and later were adopted in many states. They were designed to protect money and programs that were flowing out of Washington in the form of bloc grants (which are once again popular with conservatives because they minimize federal control) but never fulfilled their intended purpose. For example, federal bloc grants (unencumbered or non-mandated funds) that were sent to the states to help the poor and the needy were often diverted in many southern states to build highways and prisons. Thus, the federal government (and many states) placed restrictions, or mandates, on the programs and targeted their funding and use.

Hogan now wants executive authority to cut mandated programs in times of economic distress. That transfer of power would mean that fully 83 percent of the budget—mostly health, education and welfare funding, the largest chunk of the budget—in addition to the remaining discretionary funds would be directly under the thumb of the governor and subject to reduction if the economy were to show signs of slowing down.

The muscular exercise is about control. The process actually occurs routinely toward the end of every legislative session under cover of the obfuscatory title of budget reconciliation. Therein occurs a sleight-of-hand called “repeal and reenact” whereby existing mandates are repealed and readjusted, either downward or upward, as the Assembly decides, and then re-codified into law through the formal adoption of the budget. (To answer an obvious question: No, the governor does not have line-item veto power over the operating budget. But yes, he does have line-item veto in the Capital Budget, or the state’s bricks-and-mortar program, which is largely patronage paybacks to begin with, so the veto is redundant.)

The budget, along with its companion, the state of the state message, is supposed to be kind of a numerical guidebook to the governor’s thinking and the numbers that flesh out his vision for the state. By that measure, from what’s we’ve seen so far, Hogan’s vision is modest, if not limited. He’s funding what’s necessary because he’s required to, but isn’t happy about. And that’s his complaint. For implicit in his message is the idea that he’d rather not.

To be fair, Hogan is all about making good on his campaign promises which he spent years developing through his grass roots organization, Change Maryland, which eventually became his political apparatus through a buy-out. He’d like to get government out of the way; he objects to taxes; he wants the Chamber of Commerce to be happy; and he’d rather pave over the state than run rails to get people from here to there.

Hogan and Maryland may be a mismatch despite the warm feelings about him personally. This is a state that has come to expect a high level of services from its government and, though there may be some grumbling, for the most part it is willing to pay for them. The budget reflects choices between those programs that are essential and those that are desirable. Hogan has so far avoided the ideological debates and punishing cutbacks that have ensnared other Republican governors who’ve attempted to impose unacceptable agendas and spending cuts on their constituents. The budget he’s submitted is far from a complete document. It no doubt will be amended by additional programs and supplemental budgets toward the session’s end. But so far, the real Hogan—the Larry Hogan of Change Maryland and the 2014 campaign for governor—has not yet revealed himself.