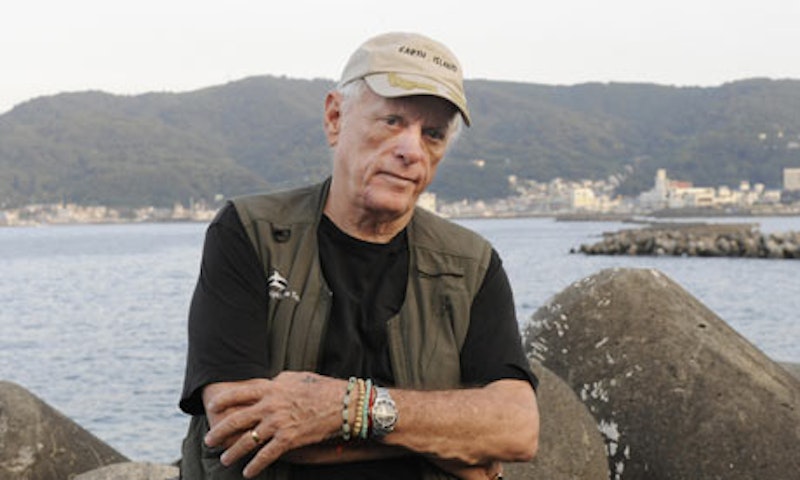 Ric O’Barry, who once trained dolphins for the TV series Flipper, was detained last Monday at Tokyo’s Narita airport. The official reason is he tried to enter Japan as a tourist without actually being a tourist. O'Barry ended up on a blacklist because he's a dolphin lover and is very vocal about it. The Japanese government doesn't like him, because every year they allow, in the fishing village of Taiji, hundreds of dolphins to be rounded up into a cove and speared and bludgeoned to death for profit by a small group of fishermen.

In the 1960s, the now 76-year-old O'Barry worked for Miami Seaquarium, where he captured and trained dolphins, but when the dolphin who played Flipper died in his arms, he had a change of heart. That's when he decided to found the Dolphin Project, which he dedicated to freeing dolphins in captivity and educating the public on the conditions they are held in.

The annual dolphin killings have become an international embarrassment for Japan, especially since O'Barry starred in the 2010 Oscar-winning documentary The Cove. Since then, the activist has been temporarily detained each year he’s entered Japan to monitor the dolphin hunt, but this is the first time he's been refused entry. Japanese authorities are accusing him of being affiliated with Sea Shepherd, an activist group that interrupts the efforts of Japanese whalers at sea, a charge O'Barry denies.

My research shows that O'Barry is eligible to enter Japan as a “temporary visitor” under a visa waiver program instituted in 2014 stipulating that Americans (among others) are allowed to enter Japan “when their visits are tourism, commerce, conferences, visiting relatives/ acquaintances, etc.” Under this rule, foreign nationals engaging in paid activities need a special visa, but Japanese officials have no evidence that O'Barry is getting paid within Japan (or from anywhere else, for that matter) for his trip. The more likely scenario is he’s become an irritant to the government, which then cooked up a pretext for his exclusion.

Japan could’ve taken another route and outlawed the Taiji bloodletting, but this is a country (along with only Norway and Iceland) that still allows whale hunting for “research.” The government has a track record of not bowing to international condemnation on what it chooses to remove from the oceans, and disingenuously calls what happens in the Taiji cove “a traditional activity,” though it didn't start until the 1950s. There's money involved, as a live dolphin can sell for as much as $154,000. A place that really does have such a tradition is the Solomon Islands, where O’Barry spent several months living and has been successful in getting people to change many of their centuries-old practices. In Japan, however, it's all about politics.

I lived in Japan for five years, and learned that you really want to minimize your contact with Japanese immigration personnel. Once, entering the country, I foolishly wrote “journalist” in the “profession” line of an immigration form, just as a lark—I was not a journalist. I was then taken into a room and grilled for about an hour. Asked to identify my “work,” I said it was “in progress,” figuring I might as well stick to my story and ride it out. It was a stupid mistake, but I was baffled that such an advanced nation would do that to me for writing “journalist” on a form. It felt more like North Korea than Japan.

Ric O'Barry’s attorney has said he’ll appeal the decision, but it’s unlikely he’ll win. O'Barry will then be banned from Japan for five years, and then can reapply for readmission, which is equally unlikely.