He’s undermining his political cause by losing state after state. 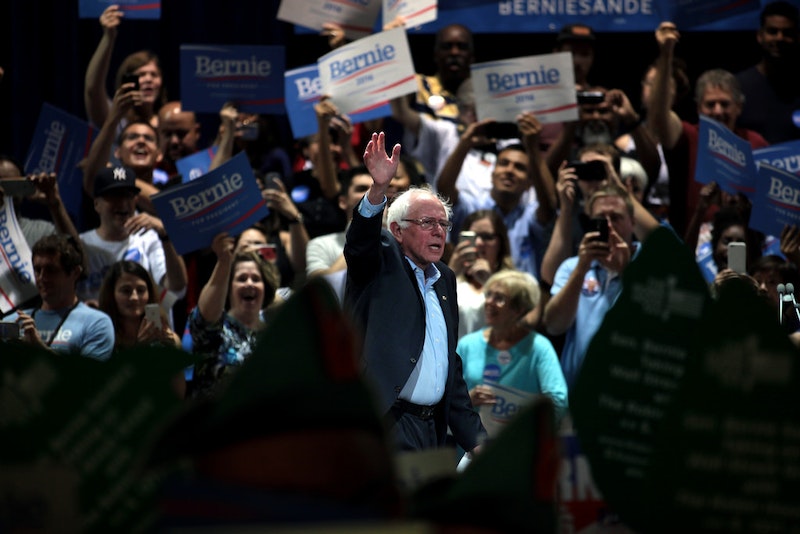 On Saturday, Hillary Clinton crushed Bernie Sanders in South Carolina. She won black voters by 86-14 percent, besting even Barack Obama's margin in 2008. If those totals hold—and polls suggest they are more likely to than not—Clinton is set to repeat the South Carolina victory over and over. She's on track to win 69 percent of the vote in Alabama, 64 percent in Georgia, and a painful 60 percent in Texas. Sanders is even struggling in Massachusetts, a largely white New England state that he really has to do well in to remain even notionally viable. He's going to win his home state of Vermont, and he could win Minnesota and Colorado, but overall it looks like a bleak day for him—bleak enough that his chances of winning the nomination may shrink down from not much to nil.

Usually when you can't win the nomination, you drop out. But many pundits think Sanders should soldier on. Jamelle Bouie writing at Slate argues that Sanders has been, "An able competitor," which is true, and that he "has forced Clinton to sharpen her message and work for the nomination," which is also true. He adds that Sanders has pushed her farther to the left on the public option and the Keystone Pipeline. And he concludes, "If Sanders’ goal is to make the Democratic Party more ideological, he should stay in the game, pressuring Clinton and forcing further commitments to his agenda."

There's one problem with that logic. Sanders has pressured Clinton because he's been contesting the race. Clinton wanted his voters; she moved left to try to get some of them. Once it's clear that Sanders is not a threat, how is he going to push her left, or in any direction? In fact, if Sanders stays in the race, it's possible he could end up undermining the causes he supports. When you run on a platform of free college and campaign finance reform, and then lose in state after state, the Party may conclude that free college and campaign finance reform aren't necessarily all that important to voters.

Similarly, Bouie points out that Sanders is now in a position "to construct a Sanders wing of the Democratic party." And that could be the case; Sanders has inspired young voters and has centered poverty as a Democratic issue. Those are gains he could work to consolidate and extend in the years ahead. But is continuing the campaign the best way to do that? Again, losing doesn't make you look stronger. And more, a presidential campaign raises a lot of money for the specific purpose of electing your candidate to office. Once it's clear that candidate isn't going to be in office, you're starting to take people's money on something like false pretenses.

There are lots of other uses you could put donations to, if you wanted to continue fundraising. Sanders could campaign for Senators in swing states, for example. He could move to create an organization to agitate for free college, or do voting outreach to young people. Is the best use of his time and energy a lost cause campaign where he underlines every day that he and the issues he believes in are on the losing side backed by a loser?

This is why people drop out of nomination battles when it's clear they can't win. Some people always seem to believe that Bush, or Kasich, or Cruz, or whoever, will be in the fight to the bitter end. But dragging yourself across the country getting beaten over and over in a losing fight is not an enjoyable experience for most people who are paying attention (so people other than Ben Carson.) If you actually have any sort of political career or policy agenda or even minimal dignity, losing is a poor long-term strategy. You don't accomplish anything by losing except for showing people that you're a loser who can be ignored.

Maybe Sanders will do unexpectedly well tonight, and there will be some logic to his campaign continuing. If not, though, I don't think he helps himself or his cause much by continuing. Since that cause is in large part one I believe in, my hope is that, when he's lost, he quits.