Day of Trump, day of doom. 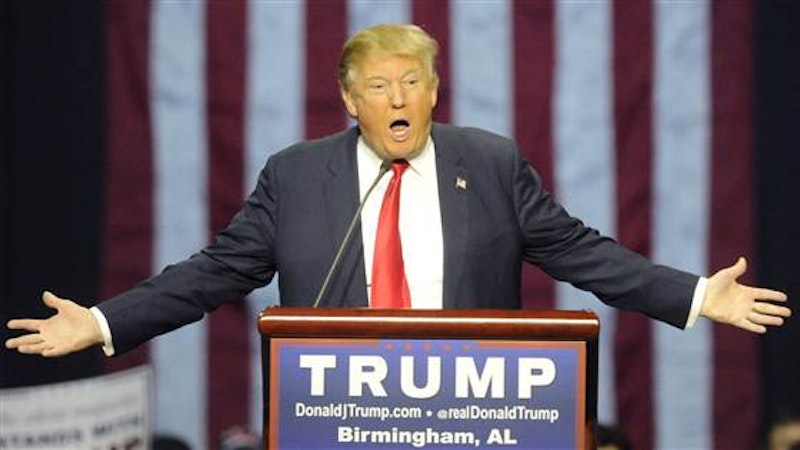 I would urge even establishment types to vote for Ted Cruz. If, on this dark day, there were any hope of Republican voters listening to me in numbers large enough to decide the outcome of Super Tuesday, that’s what I’d tell even those temperamentally inclined to lean Rubio. Why? Among other things, it’s too rarely mentioned that if Cruz got the nomination, he’s probably populist enough to keep the Trump supporters themselves onboard in the general election in November. No such guarantee with Rubio as the nominee, I’d say. But it’s a bit late to strategize now anyway, I suspect.

If you establishment people influence Rubio so much, tell him to drop out. He’s your guy, supposedly, right? So prove it by getting rid of him, if neither Trump nor Cruz is going away. Otherwise, I’d say the establishment, by letting the Cruz/Rubio scuffle for second place continue, just became the real anointers of Trump, ironically.

The more radical I get, the less I care which candidate prevails. Paradoxically, the more I want government gone altogether, the more I can see plausible arguments (mostly strategic rather than principled) in favor of numerous presidential candidates, from Sanders and Clinton to Cruz and Trump—with Kasich, Rubio, and the Libertarian Party somewhere in between. When I see tweets from committed, fully convinced supporters of one camp this year, for a moment I think, “That confident? Really? That must be a weird feeling.” One reason it’s been a paralyzed-by-choice year is that, like a normal person, I experience the inability lately even to remember who’s in which candidate’s camp and why, since it all seems pretty arbitrary sometimes (Trump, really? Rubio—why? Sanders!). But this is probably how most people feel every year when they behold more politicized people.

If Cruz and Rubio emerge from today still roughly evenly matched, Trump’s the nominee, I think we all agree (absent some sort of Romney/convention high-jinx). Further, if both Cruz and Rubio are secretly comfortable with being considered as Trump’s veep nominee, we’re definitely screwed and they’ve effectively anointed Trump together. Don't think they and the establishment can't learn to live with the idea, so long as there’s a share of power in it for them, and there still will be, of course.

Tama Starr, professional sign-maker, is just one of countless business people in the New York/New Jersey area who knows Trump is a property-rights-hating thief. Read her cautionary tale.

If you really want to get state-by-state strategic about stopping Trump, here’s Sasha Volokh’s idea. He says, even if you normally vote Democrat but are allowed by your state to vote in the Republican primary today, “please vote for Rubio in AL GA MA OK VA or Cruz in TN TX.” The idea is just to boost whichever one of them has the best shot of stopping Trump in each state.

It’s unsettling how many people trust Trump. It’s astounding to me that some people who recall George W. Bush’s humble anti-nation-building talk prior to his election and feel betrayed by Bush’s post-9/11 shift still think that Trump’s random, often belligerent blathering is an indicator of how restrained his foreign policy will be in practice. On domestic policy, he tells them again and again he doesn’t care about property rights or other traditional conservative concerns—and still somehow the fat, stupid, crude moron endures.

It appears Trump’s dad was a Klansman. At least, he was arrested in a big Klan-sparked brawl, and Trump keeps doing things like signaling that he wouldn’t want to disavow his racist supporters (such as David Duke) too quickly.

Upbeat guy that I am, I suppose I’ll have to look for a silver lining in the unlikely event Trump beats Clinton and becomes president. There’s admittedly something intriguing about the idea of having a chief executive so skeptical of the system that he says things like this about 9/11: “I know that the CIA and various other agencies knew that something bad was going to happen and they did nothing about it. They got it wrong.” Might he be the guy, a bit like his fellow Reform Party veteran Jesse Ventura, willing to tell us how things really run?

Trump double-talks, but on things like that he’s made some pretty clear promises: “But it wasn’t the Iraqis. You will find out who really knocked down the World Trade Center. ’Cause they have papers in there that are very secret, you may find it’s the Saudis, OK? But you will find out.”

Little discussed by the left is the fact that some of Trump’s most ardent right-wing supporters and his small, weird following among libertarians are motivated by anti-war sentiment. It’s fair at this late point in history to feel some paranoia about the military (it’s much clearer to use the simple phrase “the military” than artificially divisive political labels like “neocon,” since it’s a bigger problem than one party or subset of a party—and spans multiple governments to boot, not just ours but the UK’s, the Saudis’, etc.). In a decade and a half, the U.S. and its allies have introduced or perpetuated bloody and protracted civil wars in Afghanistan, Iraq, Syria, Libya, Lebanon, and Yemen. The rumored establishment vision of a forcibly transformed Arab world, which was troubling enough, has been replaced by the reality of an Arab world in pointless violent upheaval. Neither Clinton nor Rubio will stop it, that much I admit.

Trump is not quite pure evil, I suppose. Rather, his is something like the campaign I might’ve run had I woken up onstage with near-total amnesia, drunk and angry, only to be told I must suddenly win a presidential race or be punched in the face. I guess something non-catastrophic could come out of that scenario, but I sure wouldn’t bet on it.