The crackdown came before familiarity. 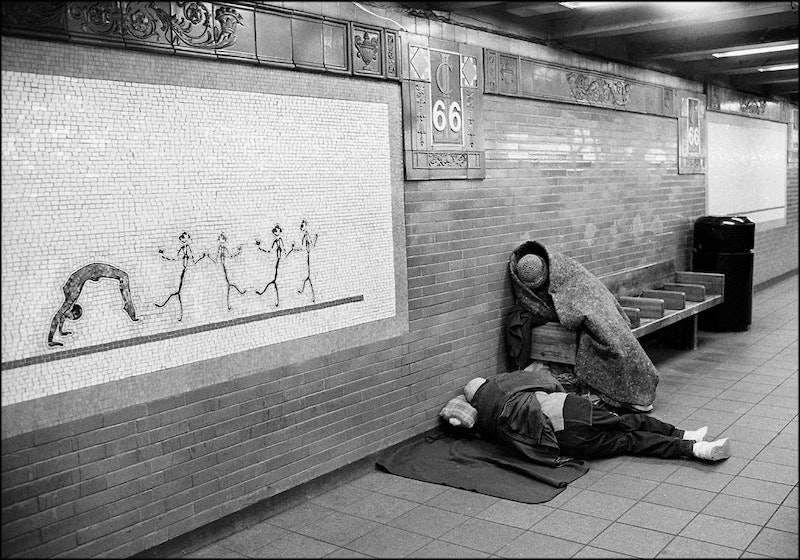 You could see the increase in homelessness in New York City last year—and your intuitive sense something was awry was borne out by statistics showing the number of homeless was at an all-time high after about a decade of decrease. Since late last year, a combined carrot-and-stick shelter subsidies/police crackdown program appears to have gotten most of them off the street. I wish they’d lingered long enough to be studied further, though.

That sounds disrespectful, but I don’t think those of us who live here quite got an intuitive handle on the “culture” of that new wave of homeless people. These homeless people often seemed more prone to be young, traveling in groups—and even well-dressed sometimes. Some were having unusually coherent conversations both among themselves and with passersby, occasionally about things like trying to prepare a resume.

The glass-half-empty interpretation is that times are so rough (despite some misleadingly positive job and stock numbers) that a whole new class of sane people are being thrown onto the streets. The glass-half-full interpretation, I suppose, would be that even bums are richer in the 21st century than they were in the 20th.

Somewhere in between the dark and light interpretations, though, is my admittedly non-scientific suspicion there was something culturally different about this wave of homeless in the same sense that there is an undeniable difference between New York street people and San Francisco street people. San Francisco can be a bit unsettling because you aren’t quite sure whether you’re dealing with a homeless person or a street performance artist at times—perhaps a long-term side effect of the town being run by nomadic hippies decades ago.

I’m not saying the aristocrats deserve bum-free streets or that ambiguous social boundaries are always bad—just that there’s a palpable difference between homeless populations, and it can be mildly confusing. Is it possible that the semi-homeless nature of Occupy encampments contributed a bit to saner, healthier people being a bit quicker to deem street life a socially-thinkable option in the past few years? Again, not faulting anyone, just observing the subtle difference.

At least living in New York City, for all its residual grittiness, means getting to go to neat events like a night of libertarian short film screenings made possible by Patrick Reasonover’s Taliesin Nexus. Then again, if I lived in Tennessee, I could be celebrating the choosing of a new state rifle. Or if I lived in Oakland, CA, I’d be avoiding pedestrian-crushing, cop-mocking, gun-firing hooligan motorists doing donuts in the street.

Every town presents some precarious combo of freedom and risks, after all.