The joke is getting queasier as it goes on. 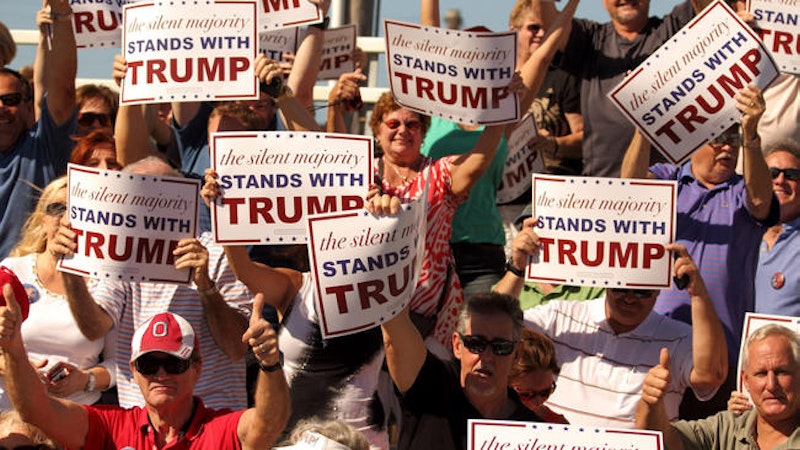 As I write this, there are 250 days left until Election Day. Who knows what the world will look like on Tuesday, November 8, 2016? Thinking too far into the future fills me with the dread of knowing so many horrible things will inevitably happen in the coming months, completely unexpected and unprecedented. Another huge terrorist attack, dozens of random spree shootings, assassination attempts, something so catastrophic that everything else gets put on hold. I’m seized by an invisible terror while each day passes, uneventful and normal around me. Meanwhile, black people are being beaten up and pushed and mocked at Donald Trump rallies across the country. “‘I was called a nigger and a cunt, and got kicked out,’ Shiya Nwanguma said after the incident.” Looks like it was that White Student Union asshole from Towson University. When Donald Trump said last summer that John McCain “is not a war hero because he was captured,” and his poll numbers didn’t disappear but go up, I knew everything about this presidential election cycle was different. Gravity was gone, and he’d be the nominee.

I’ve enjoyed the rhetorical Sherman’s March across America that’s been the Trump campaign since it began. Watching and reading him often reminded me of David Foster Wallace’s essay "Roger Federer as Religious Experience," as when Trump mimicked a reporter with cerebral palsy last year, like Wallace, I had “popcorn all over the couch and I was down on one knee and my eyeballs looked like novelty-shop eyeballs.” But as a friend pointed out to me online on Super Tuesday, too often we get caught up in drama that remain televised media events for us that actually effect real people—it’s grim entertainment. I first felt queasy after a group of “passionate” Trump fans enthusiastically beat up a homeless man in Boston because he was brown last summer. But I can check in and out of the Barnum & Bailey of Orangutan-colored pain whenever I want, because the Trump rally hasn’t come to my town yet.

Neither has Bernie Sanders, in it for long haul, despite reports from The New York Times (in the can for Clinton) who insists he has no path to the nomination, which is probably true, mathematically—but he isn’t damaging Hillary Clinton in the process, unlike the Republican field, so intent on either sabotaging Trump or cutting each other down for second place. Anyone who thinks that fervent Bernie supporters and condescending “BernieBros” won’t fall in line for Hillary in the fall are naive. Trump’s press conference Tuesday night with Chris Christie staring off into the distance like a seriously traumatized veteran was really disturbing, but also full of those DFW watching Roger Federer-type religious experiences for me, particularly when a reporter asked him why he had walked back his position on Planned Parenthood, and he replied “Because I want to do what’s good.” He’s pivoting toward the general election, and it’s a very good thing that Trump is the nominee (like I predicted in July 2015), because he will bring to the surface the scrim of combined racism and anger that’s been brewing not since Obama but since Hurricane Katrina in 2005. America will have to reckon with itself, and better that Trump accelerate the process that keep letting it foment through mealy-mouthed dog-whistlers like Marco Rubio and Ted Cruz. Let’s have a battle between the white supremacist candidate and the neocon Clinton who will keep things going on as usual. As an observer, militant misanthrope, and lover of political theater, I can’t get enough of the wizardry of Trump’s campaign, but it gets harder and harder to stomach every day when people are being hurt who never wanted to be involved in the first place.