Hillary Clinton Is This Campaign’s Zelig

Bernie Sanders can only hope to influence the all-but-certain nominee. 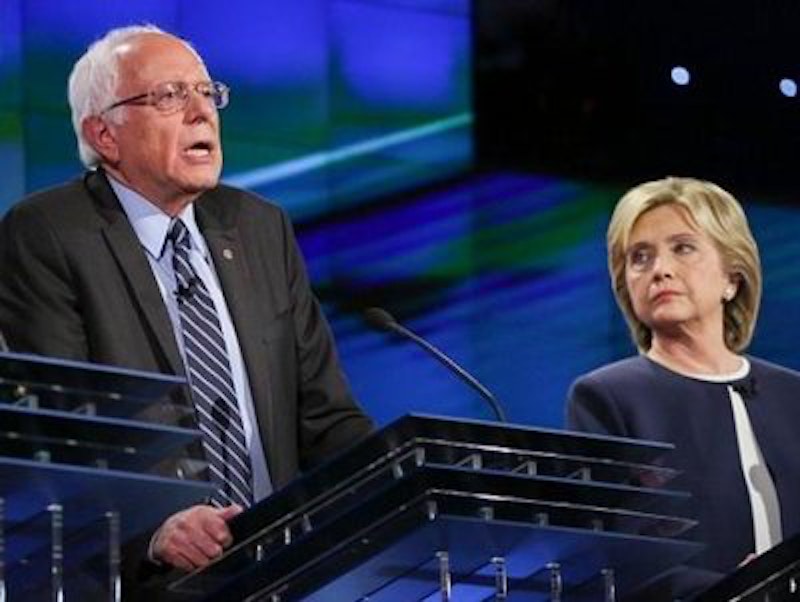 Hillary Clinton is Bernie Sanders in drag. She said it. He said it. That they both agree validates the policy blur, though Clinton’s newly acquired Bernie sheen may not last beyond the convention. It further confirms that Sanders has re-shaped the Democratic campaign to fit his idea of democratic socialism, providing the combative counterpoint to the sharp rightward lurch (some) Republicans have taken. The center is dead unless, as it seems, anger is the new middle ground.

“I want the same things Bernie wants,” Clinton has said in full pander.

Clinton is this campaign season’s Zelig. Often she sounds like the Grand Ole Opry’s Minnie Pearl as she drawls her way across the South. And as quick as a hiccup she mimics the tonal inflections of the streets as she segues to the North. She has a voice for every reason and season. So it should come as no surprise that she inhabits the programs and policies of Sanders and postures as the avatar of progressivism.

That bit of fanciful imitation—in writing it’s called plagiarism—may be, to some degree, what cuts to the problem Clinton has with inauthenticity and untruthfulness. Being true to oneself does not usually involve assuming another candidate’s intellectual property, though there’s no patent on political ideas. Sanders, in self-effacing mockery, seems flattered by the purloining of his platform.

For that reason alone, among many others, Clinton would like to dispose of Sanders as early as this week so that she can resume her own identity as the moderate that she really is. But Sanders, and take him at his word, has vowed to remain in the race right up to the July 25 Democratic convention in Philadelphia. Sanders, a realist, cloaks no illusions about the nomination. His purpose, of course, is to hold Clinton’s expensively shod feet to the fire as well as to assure that his views will help shape the party platform. Sanders has campaign funds pouring in, much to the envy of Clinton, actually, to support his staying power although this week’s continuing string of elections narrows the mathematics of his securing the nomination.

Sanders, for all of his oddball politics, has set the tone and the tactic for the Democratic campaign much to Clinton’s chagrin, and early on to Martin O’Malley’s surprise when Sanders out-maneuvered him as the avuncular agent of change. Sanders vanquished O’Malley from the race and back to the bandstand. Clinton was forced to play catch-up and to recalibrate her message almost daily to match Sanders’ holier-than-Wall St. harangues.

Sanders is an original. His success is a paradox: He’s a 72-year-old who campaigns as the hope of the future, when his own future is limited, and his appeal to young people is deep and wide. He’s the same Bernie Sanders that he was more than 50 years ago as a college student and civil rights activist in Chicago. It’s almost as if he’s never grown up. Sanders’ message of a rigged economy and income inequality is the primal scream of the Democratic presidential campaign. Sanders send-‘em-a-message politics mimics a stratagem employed by Bill Clinton in 1992—it’s the economy, stupid. Only with Sanders it is.

Clinton, a woman of expansive intellectual gifts, campaigns on her record and her past. In her heart of hearts, she’s the centrist that she was during her husband’s years as president who evolved over the years from being a “Goldwater girl.” Her candidacy is gender-forward, and to hear her pitch she’s the reincarnation of Rosa Parks, Susan B. Anthony and Mary McLeod Bethune. Her topically adjusted message is an irony-free pantomime of Sanders.

Sanders is an annoyance that Clinton did not anticipate during the planning stages of her anointed return to the White House, redeemed not as spouse but as president. But Sanders, unlikely as it appears, has captivated blocs of voters that earlier Clinton might have counted in her column—women of a certain age group, young people and even Hispanics. (Sanders carried the Hispanic vote in Nevada, which Clinton won easily in 2008.)

But across the south Clinton can drop the Sanders act, for here is where her electoral strength lies. It’s Bubba country, where her husband, a southern Baptist, is enormously popular, and blacks are a mighty force, in numbers if not in political office.

The nation’s black population totals only 14 percent, but the bulk of it is in the south. (Maryland has the largest black population, 33 percent, outside the Deep South.) And it’s here that Clinton plants her flag and stakes her claim for the current and running string of primaries. By contrast, Sanders, to offset these losses, is concentrating on states with scant black populations to chalk up wins and boastful showings while Clinton romps through friendly territory. (Sanders, for example, has been courting Massachusetts with only a four percent black population, and Oklahoma, with a tiny black presence and mostly Republican.)

As the campaign progresses, it’s important to remember that presidential nominations are won with delegates. On the Democratic side, most delegates are awarded on a proportional basis, that is, by Congressional district. In other words, the candidate who wins a congressional district is awarded the number of delegates allotted to that district if a threshold of 15 percent is met. Democrats send 4763 delegates, including 794 super delegates, to the convention and the nomination requires 2383 delegates. If no nominee is selected on the first ballot, the delegates are released and deal-making is on.

However, there have been charges that the super delegates, mostly elected officials, are stacked in favor of Clinton. The cluster of super delegates is composed largely of mainstream politicians. Super delegates were created mainly to spare elected officials the possibility of embarrassing defeats if they were required to run on slates as delegates. The prevailing thinking at the time was that a governor, for example, might be defeated on the ballot for convention delegate by voter revenge for an unpopular program they might have enacted.

For all of his windy oratory and single-bore message, and for all of his determination to tear down Wall St. dollar by rigged dollar, Sanders’ intention all along, win or lose, was really to re-make Clinton and the Democratic party in his own image and likeness, if only temporarily. On this, at least, he has succeeded.