Sneering at Harris on behalf of my variously persecuted ancestors. 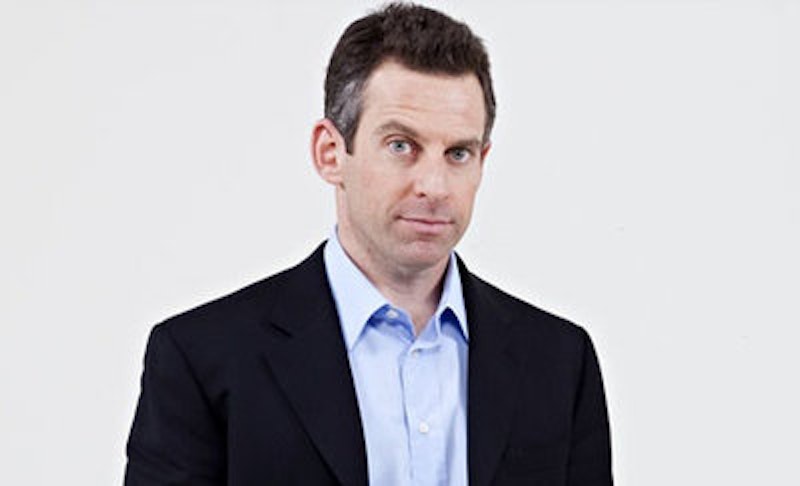 Sam Harris is an atheist cheerleader for rationality. He's also a committed supporter of Israel. And he's also willing, eager, and able to spurt out nonsensical anti-Semitic bilge, as this excerpt from his 2004 book End of Faith makes clear.

“The gravity of Jewish suffering over the ages, culminating in the Holocaust, makes it almost impossible to entertain any suggestion that Jews might have brought their troubles upon themselves. This is, however, in a rather narrow sense, the truth. Prior to the rise of the church, Jews became the objects of suspicion and occasional persecution for their refusal to assimilate, for the insularity and professed superiority of their religious culture-that is, for the content of their own unreasonable, sectarian beliefs. The dogma of a "chosen people," while at least implicit in most faiths, achieved a stridence in Judaism that was unknown in the ancient world. Among cultures that worshiped a plurality of Gods, the later monotheism of the Jews proved indigestible. And while their explicit demonization as a people required the mad work of the Christian church, the ideology of Judaism remains a lightning rod for intolerance to this day. As a system of beliefs, it appears among the least suited to survive in a theological state of nature. Christianity and Islam both acknowledge the sanctity of the Old Testament and offer easy conversion to their faiths. Islam honors Abraham, Moses, and Jesus as forerunners of Muhammad. Hinduism embraces almost anything in sight with its manifold arms (many Hindus, for instance, consider Jesus an avatar of Vishnu). Judaism alone finds itself surrounded by unmitigated errors. It seems little wonder, therefore, that it has drawn so much sectarian fire. Jews, insofar as they are religious, believe that they are bearers of a unique covenant with God. As a consequence, they have spent the last two thousand years collaborating with those who see them as different by seeing themselves as irretrievably so. Judaism is as intrinsically divisive, as ridiculous in its literalism, and as at odds with the civilizing insights of modernity as any other religion. Jewish settlers, by exercising their "freedom of belief" on contested land, are now one of the principal obstacles to peace in the Middle East."

Middle East Eye writer C.J. Werleman reposted this gem on social media this week. You have to love that opening, in which Harris presents himself as a bold truth-teller for blaming Jews for their persecution—since no one in history has ever blamed the Jews for their persecution. Brave! And then, the slippery descent into anti-Semitic boilerplate, the slide unimpeded by logic, information, or insight.

The Jews, we are told, blighted their future by clinging to a vision of themselves as a "chosen people." All their suffering, "culminating in the Holocaust" no less, comes from their refusal to assimilate; their persistent tribalism which, like all other religions, is so "at odds with the civilizing insights of modernity."

The fact that German Jews were thoroughly assimilated doesn't cross Harris' keyboard. Many Jews actually supported Hitler because they thought of themselves as Germans first and Jews not at all, and so, like lots of Germans, Hitler's nationalism and anti-Communism appealed to them. For his part, Hitler went out of his way to hunt down and kill Jews who’d converted to Christianity, not to mention the children of Jews who had married Gentiles. I'm an assimilated exogamous atheist, but the Nazis would’ve thrown me in the ovens just as surely as if I kept kosher. Hitler didn't even think of Judaism as a religion, for the most part. He thought of it as a eugenic, post-Darwinian racial designation (an opinion queasily echoed in Harris' bizarre suggestion that "As a system of beliefs, [Judaism] appears among the least suited to survive in a theological state of nature.") For Hitler, Jews weren't a bunch of religious cultists who clung to their difference. They were subhuman vermin, who were more, not less, culpable for trying to blend in.

Harris also seems unaware of anti-Semitic tropes related to Jewish assimilation. Yes, white supremacist sorts sometimes mutter darkly about the "chosen people." But there's also a meme that Jews are too quick to blend in. Thus the Russian anti-Semitic sneer that Jews were "rootless cosmopolitans," severed from authentic national identities or commitments. Similarly, Hitler saw Jews not as atavistic holdovers, but as ultra-modern capitalists, arrayed, with their sneaky futuristic wiles, against the traditionalist volk. In short, anti-Semites set up a double bind; if Jews don't assimilate, they're to blame for making themselves targets; if they do assimilate, they're deceptive sneaks who must be rooted out and killed.

Harris speaks in the name of rationality and dispassionate inquiry, but has no idea what he's talking about. All he has really is the blind prejudice of the knee-jerk atheist. Religion is bad. Judaism is a religion. Ergo, Judaism must be bad, and people who see it as bad can't be entirely wrong. The Jews made themselves different, so they were collaborating with Hitler, even when they actually were working not to be different and Hitler killed them anyway for reasons that didn't have anything to do with religion. It all makes sense, if you're determined to see the world as an object validation of your own particular smarmy preconceptions about who's smart and who deserves to be chastised for error.

Harris is again a major proponent of Israel, largely because he sees Muslims as moral monsters motivated by bloodthirsty irrationality. "What do groups like ISIS and al-Qaeda and even Hamas want?" he asks with mounting hysteria. "They want to impose their religious views on the rest of humanity. They want to stifle every freedom that decent, educated, secular people care about." Anti-Semitism is largely a dead letter in American political life, and Harris is willing to go along with that consensus. He may despise Jews, but only the contempt for Muslims will be weaponized.

But Harris' little riff on Jewish responsibility for the Holocaust is a reminder to supporters of Israel, or Jews in general, that Islamophobia can turn on you if you're not careful. Harris, so decent, so educated, feels contempt for people who don't share his religious beliefs. Those people are backwards, benighted, anti-modern—which for Harris means anti-good. They deserve what's coming to them. Under that veneer of urbane reasonableness, the same old prejudices leer and spit. Harris is a one-man demonstration that you don't need to believe in God to revel in ignorance. Throughout history, and still today, there's no religious qualification for hating Jews.