Paul has a philosophy and should defend it, says Todd Seavey. 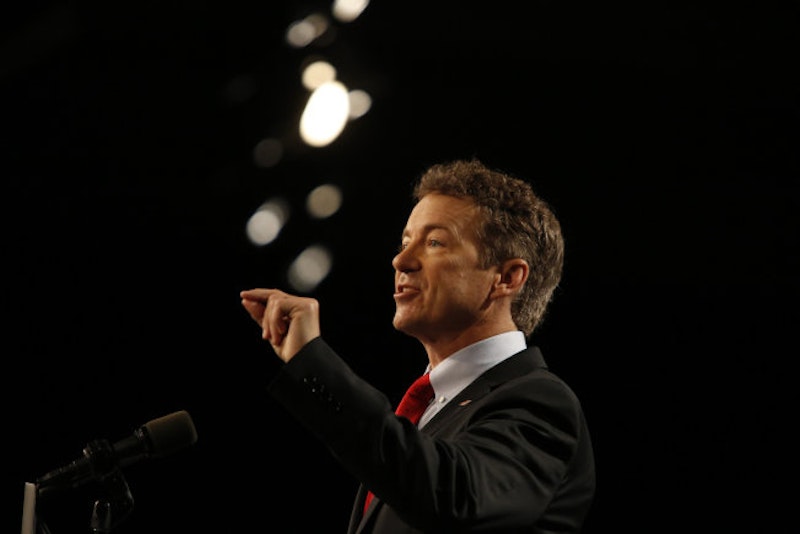 As a libertarian, you expect electoral defeat. While some on the left scream constantly as if libertarians already dominate Wall Street and Washington, the truth is there are very few of us and we rarely win.

The Cato Institute’s David Boaz and David Kirby found that about 14 percent of Americans are (very broadly speaking) libertarian-leaning, enough in theory to constitute an important swing vote. However, National Review’s Ramesh Ponnuru replied with the depressing observation that the candidate the libertarians pick tends to lose anyway.

People just love the wielding of political power and the distribution of free stuff. We libertarians have learned not to get our hopes up too high. Still, this time seemed as if it might be different.

Presidential candidate Sen. Rand Paul is articulate, funny, coalition-building, and wise enough to avoid the fringier and conspiracy-theory-tainted elements of his father’s rhetoric. He attracted positive media attention with a few moves, such as his anti-drone filibuster. He appeared capable of bridging the divide within the Republican Party between conservatives and libertarians, to my delight. Perhaps he would not only win the upcoming primaries but also heal the left-right-libertarian fissures in our culture.

But as Trump rises like a giant electoral non sequitur to 26 percent support among Republican voters and Paul falls to four percent in the latest Monmouth poll, I’m reminded of Carl’s glum counsel on Aqua Teen Hunger Force: “It don’t matter. None of this matters.” We’re not going to write political-historical narratives that lead with any sort of inexorable logic from Edmund Burke through William F. Buckley to Donald Trump. Maybe P.T. Barnum through Ross Perot to Trump. But stuff just happens sometimes.

I’d imagine there will be pressure from the Republican Party elite for the candidates who are languishing down in the single digits in the polls—which is to say, all of them except Trump, Bush, and Walker (the only three out of 17 who are at 10 percent or better)—to drop out, so that the non-Trump voters can rally around a non-Trump before he wins a plurality in the primaries. That means I may only have a couple days in which to give Rand Paul winning advice.

My advice would be that although he can attract fleeting attention with other filibuster-sized stunts—his most recent, taking a literal chainsaw to the tax code—or go the route that I fear some Republicans will of trying to out-loudmouth Trump, he might be best off explicitly describing his political philosophy. A coherent philosophy is something Trump, Bush and Walker can’t offer. Politicians rarely have one, after all.

Ironically and frustratingly, Paul, the one candidate in either major party who I think has a consistent philosophy, has somehow ended up with a reputation for being the biggest waffler (even called as much by former Ron Paul staffer Jonathan Bydlak), since he hops back and forth between libertarian- and conservative-sounding pronouncements. But, I mean, if he’s inconsistent, what on earth is every other candidate?

In tomorrow’s column, I’ll try to explain briefly what that philosophy is.