8 Terrible Truths About the Fox Debate 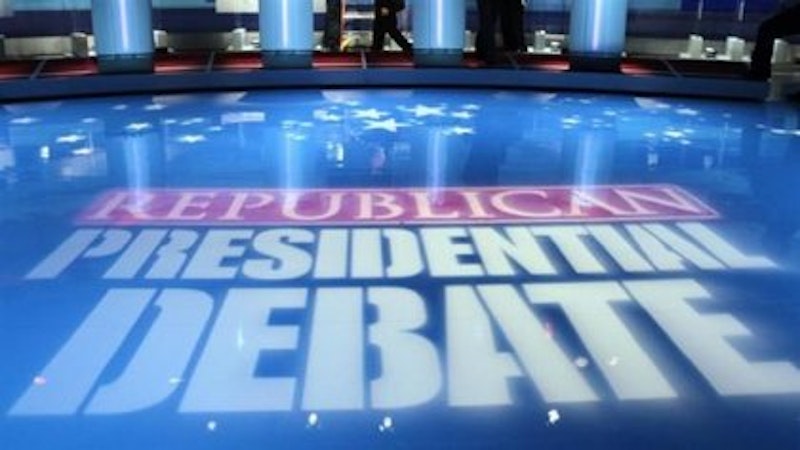 Plenty of firm-voiced, quick-speaking jaw jutters were on hand to speak the hard Republican truths. Together the boys offered a selection, like flavors. Pulling in Trump seemed unnecessary; he was the common act's gross, wailing-voiced version. “Because our leaders are stupid,” he said, complaining about the border. “Our politicians are stupid.” Thud, thud. His good moments were incidental, the bits where he absently shouldered his way through debate conventions like a prehistoric sloth dealing with doors. For instance, when he talked like Sammy Maudlin. He did it some when making nice with Jeb Bush: “He is a true gentleman. He really is... and I mean that.” He did it a lot more when talking about a fetus he knew that wasn't aborted: “And that child today is a total superstar, a great, great child.” To sound like Sammy Maudlin on abortion—that's something new for presidential debates.

The debate whirred. One contestant after another, galloping to the minute and 10 second mark on their answers. Instead of being swamped by the 10-man load, Ailes organized something fun for people with short attention spans There was always another character to pull in (Ted Cruz!). Different voices, short answers, crisp articulation, some good lines here and there: every contestant brought the necessary, and Ailes knew how to use them for what they were worth. Conservatives love brisk and cut-the-crap. The night was a celebration of their style. “All right, enough,” Chris Wallace said, when a couple of contestants needed correction. Megyn Kelly, voice up, teased a debate segment: “Stick around. Social issues. Next.”

Cruz on his presidency: “The next thing I intend to do is instruct the Department of Justice and the IRS to start persecuting religious liberty.”

4.  Some unfairness is okay.

Word is Fox jiggered the poll selection to put John Kasich on the stage and keep Rick Perry off. If so, good move for their side. Perry is sub-par material for a pro show like this. Kasich measures up. He can talk fast and high and clear, and he can drop useful signifiers: balanced federal budget, governor of Ohio. He sounds like a plausible candidate for president, and he spent some of his airtime artfully talking up Trump without taking Trump's side. (“I was just saying to Chris Christie, they say we’re outspoken, we need to take lessons from Donald Trump if we’re really going to learn it.” ) Perry would have just gotten mixed up about who was supposed to be saying what. He would have slowed everybody down, him and his glasses.

The lead clips may well be Rand Paul and Chris Christie going at it. Along with Donald raising his hand while the crowd boos. As opposed to clips of Donald upending political conventions or making some other candidate quiver.  Marco Rubio trotted through his answers and did it nicely, unmolested. Trump declined an opportunity to get in Jeb's face about immigration (Chris Wallace suggested that he give it a try). Nor did he outflank the others by showing how he could be Mr. Tough Guy while deploying his heavy, authoritative brand of niceness. When he made his points, had his marquee moments, he did it loud and angry—his usual. People may also notice that a Trump challenged to produce evidence is not a Trump who puts up or shuts up.

Like ISIS, Trump may lose his followers unless he finds foes to beat down into the ground: domination is his big act, and that's what his crowd wants to see. If so, the Lake Erie debate was not good for him. He may have gotten the most attention, but he didn't dominate.

This promise: “If I’m the nominee, I will pledge I will not run as an independent.” This observation: “And honestly, Megyn, if you don’t like it, I’m sorry. I’ve been very nice to you, although I could probably maybe not be, based on the way you have treated me. But I wouldn’t do that.” And this exchange. Kelly: “For the record, it was well beyond Rosie O’Donnell.” Trump: “Yes, I’m sure it was.”

From the undercard debate. Remember that Perry says all that follows while wearing his big glasses.

First, the moderator asks him why he's ready now when he wasn't in 2012. From underneath his glasses, Perry speaks: “After those four years of looking back and being prepared, ah, the preparation to be the most  ... POW-erful individual in the world requires an extraordinary amount of work. Not just having been the... governor of the 12th-largest economy in the world, which”—his voice accelerates, he knows this bit—“I might add we added 1.5 million jobs during that period of time, over that”—carefully—“2007 through 2014 period, a period when America was going through the most deep recession it had been through since the Great Depression.”

Leaning toward the mike. “I think Americans want someone to have a track record of showing them how to get this country back on record.” Yes, he says, “back on record.” But he's charging: “Someone of them willing to stand up and every day project that best days of America are in front of us. And I will assure you, as the governor of the state of Texas, and”—gesturing off to the side—“as those last four years have shown me, the preparation to be ready to stand on this stage and talk about those monetary policies, those domestic policies, and those foreign policies. Americans are going to see that I'm ready to be that individual.” His voice rises as he contemplates talking about monetary policies and the rest. As far as he's concerned, this is a great passage. He's really banging the cymbals for himself.

The moderator (warmly): “Thank you, governor.”

On his afternoon show, Shep Smith intros Jay Townsend, “a political debate coach, Republican campaign manager, and he's also worked with Democrats.” Townsend is an ancient man who looks to be mainly spine and brain; he's elegant without trying, and he sits erect. He talks to Smith for a while about how the smart strategy for Jeb Bush is to remind everybody of the great things he did in Florida. Townsend also talks up running for office, the way a gym teacher would talk up jogging. It's just a good thing, he seems to feel, and the money's out there. If you have a cause, go for it. Townsend: “These kinds of campaigns are where causes are born and where they are given life. So if you believe in something, go.”

Townsend says, “We're going to have fun tonight.” Then, faintly: “Aren't we?”