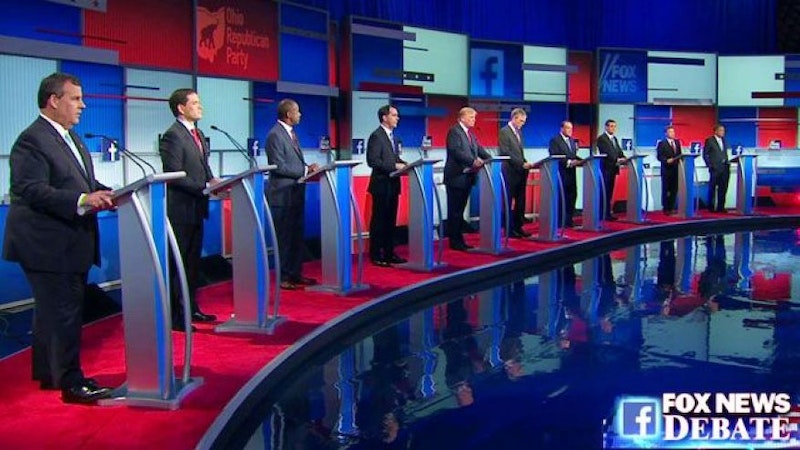 • If Hillary Clinton is the Democratic presidential nominee, it would help to at least have the Republican vice presidential candidate be a smart female—preferably one from a big state for electoral-strategic purposes. The main lesson from the smaller seven-candidate debate yesterday was that California businesswoman Carly Fiorina is ready for that spot.

• Bobby Jindal (who I met when we were Brown undergrads, if memory serves) is the most detail-oriented and articulate of the smaller-debate batch, I think I can say objectively. He won’t be president, but it may have always been his destiny to be Secretary of Health and Human Services or Secretary of Education, so don’t forget about him.

• Santorum, Pataki, Gilmore, Perry, and Graham all sounded sort of tired or uninspired. In fact, all seven of those who failed to make it into the main, ten-person debate should probably just drop out now. Most of them are establishment candidates whose (few) supporters might well swing to Bush and put him in the lead. It should be remembered, Fox’s own final pre-debate poll had all Republican candidates except Bush and Trump in single digits.

Paul or Cruz or Walker—seen, like Bush, in the second of last night’s debates—could rally a mix of conservatives and libertarians more easily than Bush can, so I hope those three, and those three only, don’t drop out just yet. The rest can and should go. But a few thoughts on the other six candidates in the second debate while they’re still around:

• Trump’s appeal remains his willingness to insult everyone—heck, he even slammed the other candidates as “puppets” of the Koch Brothers online several days ago, as if forgetting which party he’s crashing (and making clear last night he’s willing to leave it). Meanwhile, the Kochs make calm, reasoned appeals for things like an end to corporate welfare, reminding people not all free-market bigwigs are unprincipled louts, something that Trump makes it distressingly easy to forget. The faster he exits, the better. Luckily, the best way to beat him is clearly via the high road. He rules the low.

• The press has never been as alarmed by America’s fondness for Chris Christie as by its fondness for Trump, but doesn’t their popularity spring from a similar foundation of ego and impatience? They are both establishment powerhouses, yet neither is so much Dean Wormer as Bluto. Americans long for someone to blunder into the establishment and throw food at it—especially while seeming capable of truly enjoying whatever food remains unthrown.

• John Kasich, like Christie, has solid gubernatorial experience and free-market leanings but is still the kind of no-good bastard willing to turn on a dime and call people un-Christian for opposing Medicaid expansion or to claim, implausibly, not to know what the libertarian Cato Institute is when criticized by them: “I don’t know who these folks are, another Washington group.” Yeah, it seems free-marketeers don’t really know who you are either, Governor. Dismissed.

• Rubio remains non-threatening and Hispanic and may yet be a VP candidate, but not if Bush gets the nomination, remember. You can’t have two candidates from the same state. Rubio’s a fairly predictable establishment guy, but no one has a greater interest in taking down the establishment’s favorite son, which is interesting. Well, mildly interesting.

• Huckabee is terrible, defending both religious and governmental excess.

—Todd Seavey can be found on Twitter, Blogger, and Facebook, daily on SpliceToday, and soon on bookshelves with the volume Libertarianism for Beginners. He will be onstage this Saturday, August 8, 7pm, at the PIT (123 E. 24th in Manhattan) in the “Electoral Dysfunction” political/humor panel discussion.