Paul on the Road to Damascus 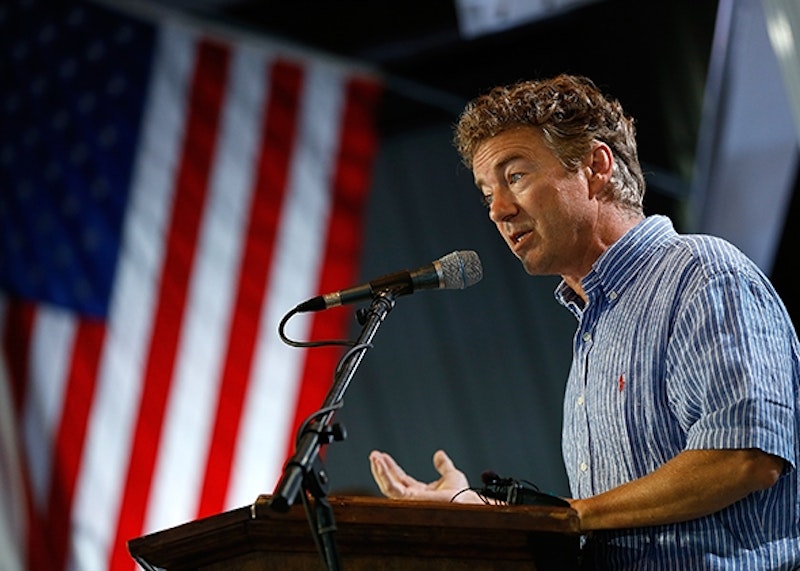 I said in yesterday’s column that Rand Paul isn’t just zigzagging politically. Yet despite being pretty consistent by any conventional political standards, he has some critics worried he’ll want to shrink the military one day and invade Syria the next. He should clear up confusion by telling people he’s basically a minarchist paleolibertarian. There, I said it. The big secret is out. I hope I haven’t derailed my favorite political campaign.

I’m not saying he should use that clunky term Thursday night in the debate. He should present a broad-strokes picture of his coherent philosophy for viewers who may be having doubts, the way a more conventional candidate might roll out the basics of his jobs bill or what have you.

While the other candidates hem and haw and talk about little things, Paul could explain that while he hews to old-fashioned values that should appeal to Republican primary voters (thus “paleo”), he doesn’t want to impose many laws on citizens beyond very basic protections of body and property (thus “libertarian”), and, unlike some of us anarcho-capitalist libertarians who want to abolish government completely, thinks a limited government has a few legitimate responsibilities including running courts and, on occasion and with caution, yes, military missions (making him “minarchist” or minimal-statist as opposed to “anarchist”).

In that light, it’s not really surprising that, say, he thinks gay marriage isn’t religiously sanctioned but would also just as soon keep government out of it, or thinks we should stop being a policeman to the world but also pay special heed to unusually volatile (and individual-rights-threatening) situations like ISIS’ violent expansion or Iran’s gradual acquisition of nukes (the Ayatollah’s new book reminds us. Iran is not quite friendly, much as more radical libertarians might wish it were—and libertarians should distrust all governments, not just our own).

It’s not even that odd that Paul wants the police demilitarized and wants to know how domestic drones will be used but also said that he could envision a scenario in which a drone had to be deployed against someone killing people during a liquor store holdup. I mean, that’s what you use police and military powers for under a limited government, instead of, say, fining people for running lemonade stands without permits. Add to all that a layer of federalism not so unlike his dad’s, meaning that many divisive issues should be referred to the state governments so that the federal government doesn’t always foist one solution on a divided nation.

Out of impatience with the whole system, sure, I’ve basically turned into an anarchist, and no political candidate, not even Paul, perfectly reflects my views, but I still understand where Paul’s coming from. You can disagree with him, but please don’t think it’s just random. It’s not just weaseling and triangulating, certainly not by any conventional political standard (behold the doubletalk in every other campaign, with candidates held to much less philosophically rigorous standards). Maybe the most interesting thing he could do would be to sum up this philosophy explicitly in the debate on Thursday night—albeit in simple terms: “traditional values but unobtrusive government... role for defense but not intervention in every conflict...” etc.

At a time when many Americans must (I hope?) be dreading the next dumb, off-the-cuff comment out of Trump’s mouth or an imitator of Trump, wouldn’t it be neat to hear a politician explain his philosophy—probably shocking cynical viewers, now especially, with the fact that a politician has a philosophy?

—Todd Seavey can be found on Twitter, Blogger, and Facebook, daily on Splice Today, and soon on bookshelves with the volume Libertarianism for Beginners. He will be onstage this Saturday, August 8, seven p.m., at the PIT (123 E. 24th in Manhattan) in the “Electoral Dysfunction” political/humor panel discussion.