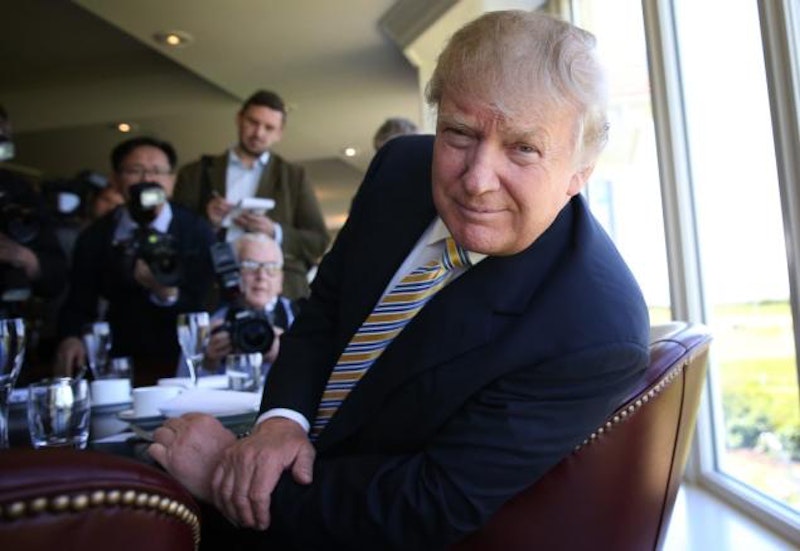 At The Washington Post, political reporter Chris Cillizza cups his hands to his mouth. “I had NEVER EVER seen a reversal in how people perceive a candidate who is as well known as Trump,” he writes, and he adds, “much less a reversal in such a short period of time.” He's explaining why he was all wrong a month ago when he said Donald Trump would go nowhere as a presidential candidate. Back then he looked at Trump's 65 percent negative rating among Republicans, and he figured that was pretty much it. But it wasn't. Now Trump's negative rating has dropped to 40 percent, and his positive rating has gone crazy: it's 57 percent, more than twice what it was. All these figures are from two polls by the Post and ABC. In the couple of months between surveys, a lot of people decided they liked Trump after all. Cillizza calls the switch “absolutely unprecedented.”

Josh Marshall is struck too. The boss of Talking Points Memo took a look at polls by Monmouth University from May through July. Now he gets his mind around the results: “Donald Trump's favorable ratings have gone from 28% to 52%, while his unfavorables have gone from 56% to 35%. To put that a different way he's gone from a -28% net approval to a +17% net approval. In other words, that's a 45 point shift in three months.”

Marshall figures that unpopular figures sometimes rehabilitate themselves and get the public to take a second look. Even so, a second look like this? He calls it “a massive, massive shift, especially for someone who is extremely well-known to the public and must have very high name recognition numbers.” To pull in another witness, we have this from Nate Silver back in June: “Trump is the first candidate in modern presidential primary history to begin the campaign with a majority of his own party disliking him.”

So far Silver hasn't appeared to notice the big change, whereas Cillizza draws no conclusion except, as he puts it, “Never say never.” Marshall goes further. He says he and his fellow pundits have to do some rethinking. “We've assumed that Donald Trump is not only capped in a national race but also likely capped about where he is now in a GOP primary race because his negatives are so high,” he writes. Now, well... “He can easily self-fund,” Marshall says of Trump. “He has a massive ego which must be firing on insane amounts of dopamine with all this attention and adulation. Why would he ever leave the race?” That's my way of thinking too.

Come on. Take a look at Trump on the screen. That isn't Herman Cain stiff-walking through his desperate monologue about how, if there was a national crisis, he'd call in all the smart people and make a decision. Trump isn't some dope being carried by a blip in the polls. He's good on TV the way an NBA star is good at basketball. To get Don Draper-ish about it, life feels different when you watch Donald Trump on television. All of a sudden it has the right fit. Meanwhile, he's saying whatever, and you know he's said many other things in his life, and a lot of them don't go together. But he's still in front of you, and you know him. He'll take care of things.

That's the Trump Effect, and it doesn't happen unless he's there talking. Hear about him and he sounds like a jerk: his quotes, his Tweets, the Birther shit. Listen to him and you're turned around. He's a lot of fun, and he senses what goes on from moment to moment. When Howard Stern interviews him, Trump remembers to keep Robin in the conversation, just tosses in her name to include her. (“My mother was five foot eleven,” he says, “and Robin, that was a long time ago, you didn't have people five foot eleven.”) That's decent. He's a powerful guy and you're okay by him, average American voter.  That's the impression I take away, and I'm a liberal who has spent decades with Trump as a bogeyman. I still don't trust him, and I recognize that he's a race-baiter. But I like seeing him on TV.

A master con is doing his work right when people are desperate, and right when the political/media landscape is giving itself a heave and becoming something else. The reality star with the hair now stands head and shoulders above the proper candidates. Negative ratings abruptly shrink when they should have been standing there like cliffs. The walls are starting to move. Josh Marshall, tell Chris Cillizza the news, and good luck with Nate Silver.