The sexism is so "covert" as to be invisible. 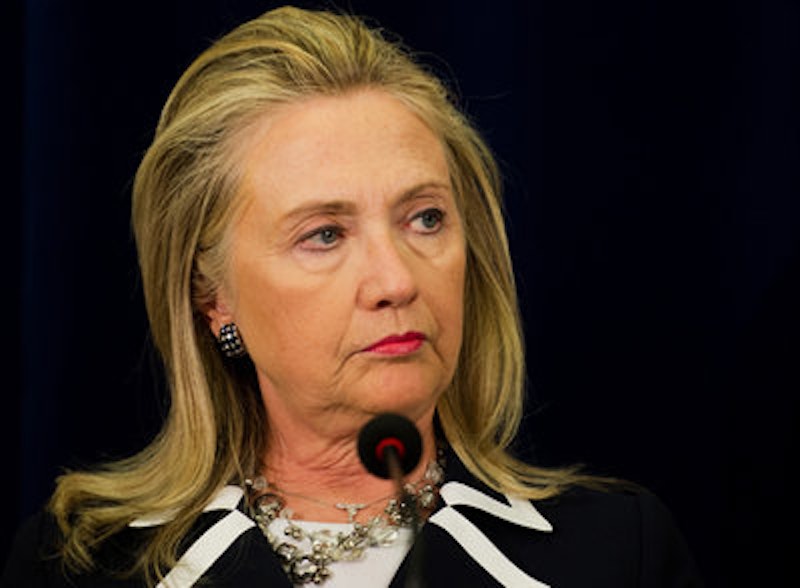 Salon is one of those publications that looks for things. Like Islamophobia, misogyny, classism, racism, and all of the other "isms." And when Salon’s spelunking, it’s going to find something, even if it doesn’t exist to the untrained eye.

While Hillary Clinton is currently the odds-on favorite in the 2016 presidential election, Salon writer Amanda Marcotte is convinced that she’s always treated unfairly because she's a woman. In her latest piece, "Just admit Hillary Won! The silly sexism of the Fox News/lefty smarty pants crowd," Marcotte lays out her case that any criticism leveled at Hillary over her debate performance is sexist.

Marcotte cites the following tweet from New Yorker writer Ryan Lizza: "Hillary won because all her opponents are terrible." While Marcotte concedes that Lizza didn't "mean to come across as sexist," she explains why it is, nevertheless, sexist: "It's hard to escape the implication that if any of the men in the contest had been halfway decent, they would have beat Clinton." In fact, it‘s not hard to escape that conclusion. That the entire Democratic field is perceived as weak is no secret. This is what’s behind all the talk about Joe Biden getting into the race. Is it sexist to qualify Clinton's debate success, given the generally acknowledged weakness of her opponents? There was no Barack Obama on the stage with her on Tuesday night.

Marcotte then moves on to The Washington Post's Dana Milbank (presumably a member of the lefty/smarty pants crowd), who commented that Hillary Clinton was a "man among boys." This is an inane comment, given the fact that she’s not a man, but the writer insists that Milbank should’ve written "a woman amongst men." No, a more accurate rendering of Milbank's intended thought—however awkward—would be "a woman among boys," as he was attempting to describe a mismatch.

Marcotte continues, asserting that Milbank sounds "like he can’t really wrap his head around the idea of a woman is a bona fide good politician." She must’ve read a different Milbank article than me, which is entitled "Hillary Clinton towers over her debate rivals," a total homage to her performance, describing her as "fluid, steady and calm."

Concluding her exposé of sexism in the media, Marcotte turns her sights on Ron Fournier of the National Journal, who wrote that Clinton “won herself a news cycle or two, because she stretched the truth and played to a friendly audience.” Fournier continued, writing that her campaign will collapse once she faces real challenges.

Here, Marcotte points out, "The sexism is covert but unmistakable: A woman’s success is attributed to other people going easy on her, like she’s a child bowling with bumpers, instead of attributed to her actual skills as a politician." Fournier is not well-disposed toward Clinton, who once warned of a "vast right-wing conspiracy." The animosity goes back decades, and attacks like Fournier's are, while not particularly balanced, routine at this point, rather than simply sexist.

The core message of this Salon article is that if you criticize Clinton you’re a sexist, and that these sexists are on both sides of the political fence. If you think she benefited from debating a weak field, that’s sexist. If you write that she dominated the debate with a cool, collected demeanor, once again you are sexist. If you issue a standard, boilerplate dismissal of Clinton, you’re a sexist.

Salon caters to an audience that wants to find sexism and other social injustices everywhere. The Salon reader knows that sexism is often covert. This allows a writer to point out sexism where it doesn't exist, while eager readers nod sagely. An unintended result, though, is that the reputation of the publication suffers. There are too many real problems in the world to worry about, rather than Salon’s political hysteria.