Canada Says What the Hell, Votes

Your guide to the election up north. 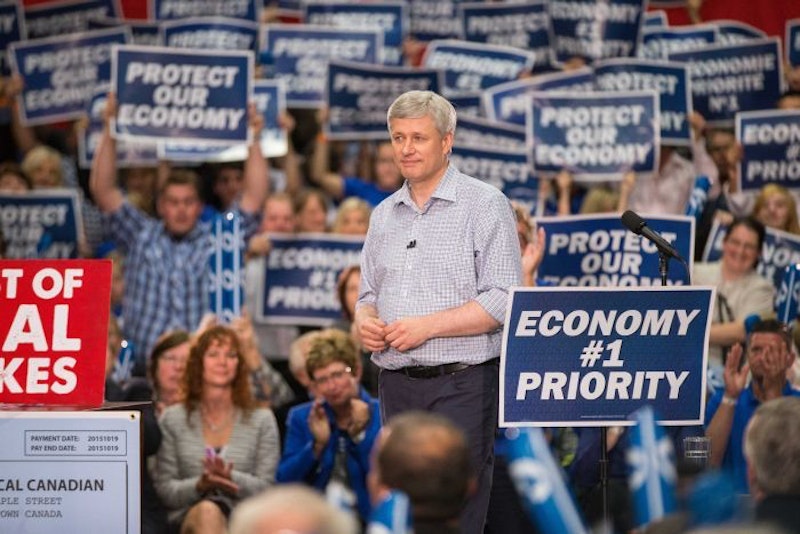 Americans recognize that Canada exists, but we're still not sure why it bothers. Trust me, the people up here have their reasons. Canada is an industrial nation and its people live rich, but it didn't invade Iraq or let investment bankers go crazy. That sets the country apart from the U.S. and much of Europe. It makes the place a very fortunate part of the globe.

Today's election marks the end of the Conservatives' fairly successful push to make Canada less progressive. The Conservatives have been in power for nine long years and the economy is slow. They may surprise people by scraping into power again, but it will be with fewer votes and a lot less clout. Meanwhile, the Liberals have rescued themselves from sliding down history's drain. Polls indicate that the party might even be able to form a government all on its own. Just four years ago the Liberals were knocked down to third place in the election of 2011, the only time that has ever happened to them. The distance it has climbed back is impressive.

But in 2011 voters in Québec fluked en masse into the New Democrat column. The exodus helped cripple the Liberals during a bad year, and it gave the New Democrats the second-largest number of seats in the House of Commons. They became the leaders of the opposition, meaning they were also the official government-in-waiting, and the Liberals just had to hang about and comment. Even so, this year's campaign has gone badly for the New Democrats, and polls indicate that the party's best hope—the very best—is to form a government kept alive by Liberal votes. Its second-best hope is to supply the votes that let the Liberals form a government, and to squeeze the Liberals hard in the process.

The men. The Liberals are led by Justin Trudeau, who is a spruce, keen, floppy-haired young man of 43 and the son of a long-serving prime minister who is now dead but much remembered. Justin, as he is often called, ought to be a fool who reads canned lines and relies on heavyweight advisers to put him right. In fact he does read canned lines and does lean on advisers. But he may not be a fool. In the debates he shouted as loud as the other contenders and didn't get any facts muddled. He's also chosen the program that makes the most sense for Canada's current situation. With the economy slowing down, Trudeau wants to run deficits for a few years and spend on infrastructure.

Prime Minister Stephen Harper leads the Conservatives. He's quiet without anyone thinking that he's nice. He created the Conservative Party a dozen years ago, taking his right-wing cowtown Reform Party and opening it to refugees from the dilapidated remnants of the Progressive Conservatives, the big business–oriented party that used to compete with the Liberals. Then he led his odd contraption to power. This year he's been hitting every lever to keep his party in charge: special tax cuts and spending plans, and an extremely long campaign—the longest in a century and a half—so he could keep spending ad money while his opponents ran out.

The third man is Tom Mulcair, leader of the New Democrats. Mulcair is best known for dicing up people in arguments. He has done it many times in Parliament, and he used to do it in cabinet back when he helped run the province of Quebec. Colleagues argue about whether he made a female cabinet minister cry. After he and his personality were no longer welcome in Quebec's government, he threw in with the New Democrats. They needed a man in Québec and he needed a party, even if this party was far to his left on government spending.

Now that he's in charge of the party, Mulcair has erased “socialism” from the New Democrats' constitution and pledged to keep the budget balanced, just like the Conservatives. He wants to convince everyone that his left-wing party that has never governed can still be trusted to keep things steady. Unfortunately Canadian economic management needs a bit of looseness just now, and the Liberals are promising just that with their get-things-moving deficits.

Mulcair also walked into a trap, one set by Harper and the Conservatives. Most people are unsettled at the thought of someone covering their face when taking a citizenship oath. Harper keeps banning the practice, and the courts keep reinstating it because the country's basic charter protects religious freedom, including that of veil-wearing Muslims. For some Canadians, the thought of a swathed Muslim becoming a citizen, her eyes staring from above the fabric, blows away any malarkey about religious freedom or tolerance for alien ways. That's why Harper keeps banning the practice, so that politicians who favor religious liberty can explain themselves to the hordes that get mad about face-coverers.

A court overruled Harper again, this time during the campaign, and the issue fell on top of the candidates. Mulcair and Trudeau both stood up for religious freedom, but Mulcair took the biggest political hit. Quebec, where the New Democrats have most of their seats, is full of small-town souls who don't like aliens. Mulcair spoke out for face covering—more strictly, for tolerance of even such religious practices as face covering during a citizenship ceremony, so long as the person's face had been verified during the citizenship process—and watched his Québec support blow a serious leak.

Harper's big problem.  Harper's tax cuts didn't ignite great amounts of economic activity. Instead oil money flowed into the country. That was fine with his base, since Alberta, the province that elects him, is also home to the oil wells. But now oil prices are way down and they've taken the Canadian dollar with them. Yet manufacturing exports haven't picked up.

Canada's economy shrank through the first half of the year. Two quarters of contraction in a row are usually counted as a recession. Jobs grew and consumers kept spending, so a number of economists say this downturn doesn't qualify. It's hard to tell Canada's recession apart from prosperity. On the other hand, it's hard to tell Canada's prosperity apart from a recession, and after nine years people are feeling rather flat.

Trudeau, the hyper young prince without a resume, is going over okay with the public. The government's very wicked ad campaign against him (“Nice hair, though”) has been foiled by Liberal ads that say, basically, never mind the hair, everything will be fine. When the economy has them fed up, voters will root for the challenger and laugh at his jokes. Mulcair could have been the challenger, but he got whipsawed. He made his left-wing party too right-wing on fiscal matters, and he counted for his majority on rural Québécois, a demographic that may hate big business but isn't too crazy about veiled foreigners exercising civil liberties.

The Liberals are no longer Canada's natural party of government. But the Conservatives haven't remade Canada into a country that hates government, and the New Democrats have turned themselves into a party with no clear rationale for governing. With today's vote the pieces may fall in a heap instead of a tidy pile, but odds are the Liberals and the man with the floppy hair will be at the top of the heap.