Better a diverse world with some high-achievers. 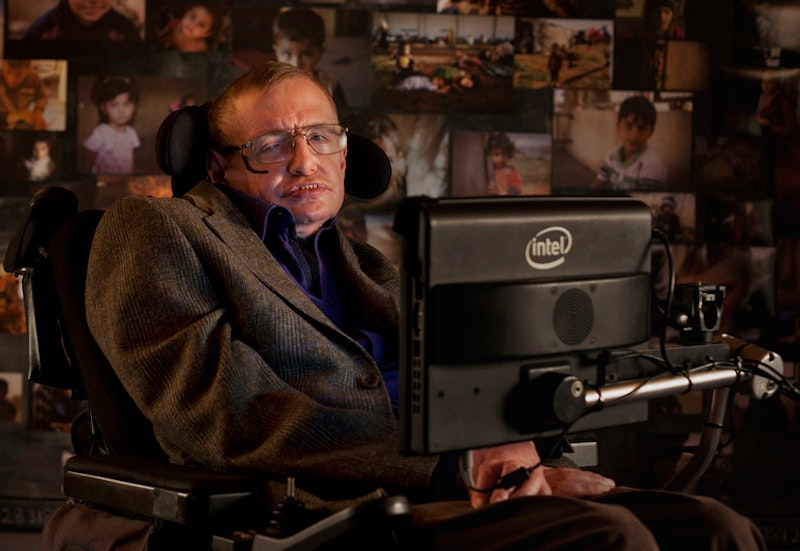 Stephen Hawking, assuming that really is him doing the talking, has warned us all about the potential menaces of A.I. and super-intelligent aliens, and since he’s socialist, he also recently warned the world about the danger of a tech-savvy capitalist class getting all the benefits from future increases in wealth while the masses are left hoping for alms after robots take their jobs.

Yet what is Hawking himself if not a rich, highly-intelligent cyborg whose efforts have enriched the lives of many other individuals and opened up more, not fewer, avenues of exploration for them? Society’s advancement will be sporadic, unequal, and unpredictable, but there’s as much reason to think the bulk of humanity will benefit as there ever has been, from the days we came down out of the trees in a non-simultaneous fashion to the early days of, say, electrical wire use.

Yet the terror each time there are advancements is that this time will be different, this time will by some circuitous economic route leave the masses with nothing. That fear no doubt contributes to the anxiety in the tech industry itself, where even the most mildly-meritocratic article like this one, encouraging people to go into tech if they have what it takes and not whine too much about equality once they get there, is deemed so controversial and offensive that even a proudly-capitalist magazine like Forbes felt compelled to take it down.

Happiness is the main thing, not equality, and I’d much rather live in a world populated by superheroes and demigods than one where I was assured no pang of envy would ever strike me because all shall be kept the same.

You know what’s far more inspiring than the vision of a Silicon Valley where everyone gets the same pay and an equal say? A future in which someone, even if it’s a mind-bogglingly rich rogue not beholden to an egalitarian collective, comes up with the technology to build a Dyson sphere—that is, a shield (likely highly porous rather than a solid sphere) surrounding an entire star and collecting most of its massive radiated energy.

Extremely-tentative reports from a few astronomers suggest that such a sphere—an “extraterrestrial megastructure”—might explain the odd material blocking our view of one star about 1480 light years away. If, hypothetically, we instantaneously contacted the builders of such a structure and learned they can now see us as we were 1480 years ago (around the fall of the Roman Empire), should we tell them they’re immoral jerks for building their Dyson sphere without making sure we had an equal portion of the tech first? Madness.

I think they’d rightly react as if a dangerous planet full of communists were rearing its envious Luddite head to menace galactic progress. Don’t be “that species,” people.

As for the physicist who came up with the (purely hypothetical, so far) idea of such a structure, Freeman Dyson, where does he stand on politics and the great potential dangers on the horizon? He calls himself “100% Democrat”—but he’s very sad that President Obama and others have bought into alarmism about severe manmade climate change, for which Dyson carefully, wearily explains there is no good evidence. Let’s hope that if the megastructure-builders show up, they judge us by conversing with Dyson and not with Obama. Presumably they prefer world-builders to progress-stoppers, after all.

And if you’d like to converse with the best and brightest our civilization has to offer, note that you can find me co-hosting a “Libertarian Halloween” gathering with Huffington Post’s Whitney Meers at Shade Bar in Greenwich Village on Wed., Oct. 21 at 7pm. Come as a terrifying aspect of government.