He's not running, he ran. 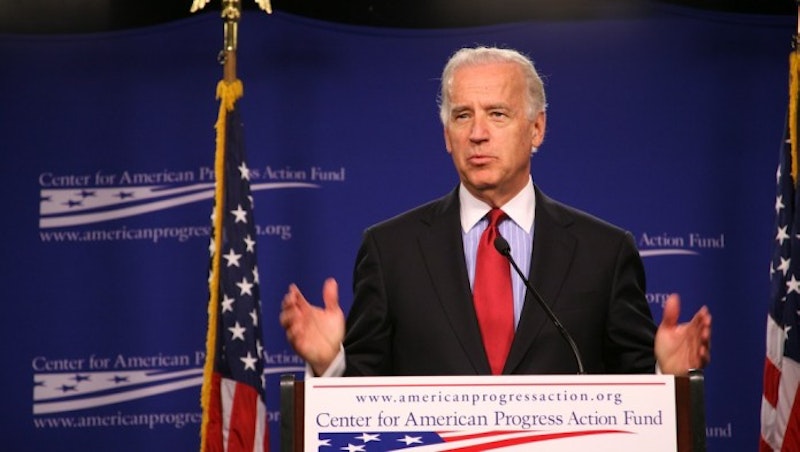 The first Democratic debate is over, and the media was reminded that, yes, Hillary Clinton is a professional politician who’s pretty good at such gatherings. Rumors of her incompetence had been greatly exaggerated—and so, commenters decided, the need for Joe Biden was not, after all, as pressing as they had declared. Maybe he wouldn't run after all?

A race without Biden is one in which Clinton is very likely going to win without a lot of drama. That's boring to cover, and boring to read about. And that frustrates the media.

So here, I shall spread joy. Joe Biden is running for president!

No, I do not have a special red Biden-phone connecting me directly to the sitting VP. But I think the evidence that Biden is running is strong—though he's not exactly running against Clinton.

Obama had two logical successors for 2016; Biden and Clinton. Biden’s made it clear in the past that he’s like to be president—but Clinton outmaneuvered him. She got almost all the major party endorsements and support early on. Democratic party insiders chose her, and Biden was beaten long before he would’ve announced or debated, much less had his name on a primary ballot.

So, Biden ran, and lost. How can he still be running, then? Because there's always a chance, however small, that Clinton might have some last-minute health issue. Clinton’s sewn up the Democratic nomination, but there's still a good while between now and the actual 2016 general election, and something could happen. Who would be the Democratic nominee then? Martin O'Malley?

O'Malley, perhaps alone, would like it to be O'Malley. But his debate performance didn't make a great case for him as a convincing national-level politician. Bernie Sanders is another option, of course—but it's not clear that Sanders is acceptable as a second choice to all those influential Democrats who endorsed Clinton. Is the party going to want someone who can be red-baited by Anderson Cooper? Maybe, if he does spectacularly in the early primaries. But probably not.

There are other possibilities. Al Gore, John Kerry, and Elizabeth Warren all seem like names that might come up in the Clinton-health-scare scenario. But the person who’d leap to the mind of many pundits (and thereby to the screens of many readers) is Biden.

We know that Biden’s been seriously considering a run. He's interested and available. The Democratic establishment may not be excited about him, but he's a known quantity. If Hillary has a stroke, he's positioned himself as the obvious successor —ahead of, say, Elizabeth Warren, who could’ve earlier mounted a credible campaign.

So will Biden formally announce? Probably not. Why should he bother? He's not trying to beat Clinton. He'd only hurt his chances, probably, by getting in and getting skunked in a primary or two. As it is, should Hillary falter, her delegates will be up for grabs, and Biden’s in the best position to get them.

Biden, then, is running a long-shot campaign, the most active part of which is probably over. He's established himself as the candidate-in-waiting, and there's nothing really for him to do now but sit back and wait. The media, for its part, has probably gotten all the juice they're going to about a Biden run. All that's left to do is to pray that Sanders wins Iowa—or write another piece on Trump.