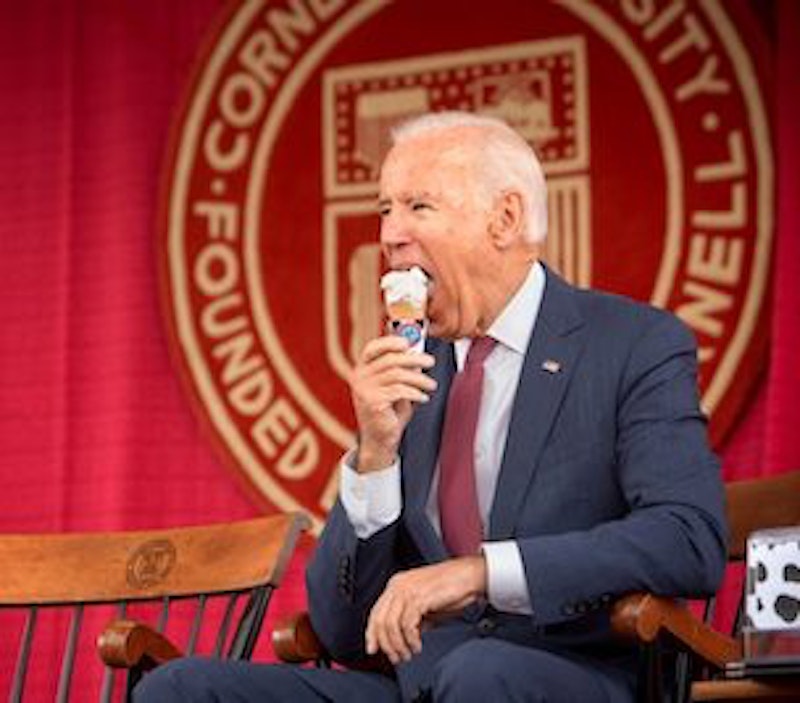 Don’t let anyone jockeying for control of big government tell you they’re “anti-establishment.” The Democrats, mildly rebellious in the days of Watergate, aren’t pretending to be anymore.

For a couple of decades, it was unclear whether it was fair to start calling the Democrats the establishment. They obviously don’t like to be thought of as conservatives. But if Obama’s “hope” and “change” sounded revolutionary enough to keep you on the edge of your seat, surely Joe Biden telling donors recently that “Nothing will change” is a sign you can slump back listlessly now.

I hope someone will mock up “Biden: Nothing will change” posters. There are worse slogans, and Americans might find this one reassuring (a poll suggests only about a quarter of Democrat voters are drawn to candidates with radical agendas). It’s a candidate’s frank confession, though, of being the establishment.

Biden can’t plausibly pretend to be anything else, what with his time in the Senate and the vice presidency, not to mention his son cropping up on the board of a legally-fishy Ukrainian natural gas company at exactly the time the Obama administration sounded willing to go to war to keep that region economically separate from Russia.

Normally, you campaign against an incumbent president by sounding like an agent of change, and I’m sure the Democrats will try a bit of that rhetoric in this week’s debates, but Trump is too chaotic and unique to be easily labeled “establishment” (despite his money and power). Leading challenger Biden must instead campaign as a restorer of normality, of business as usual, sometimes a noble and necessary role.

But all this is another complicated side effect of our era’s paradoxical institutionalized, permanent, progressive revolution (basically, constant economic and political upheaval at the hands of government bureaucracies a century in the making, so old and stifling they look almost like tradition). I’m not saying it’s a revolution that accomplishes anything exciting at this point, but it continues plodding along, normalizing the continual, brutal and jarring issuing of economic or cultural edicts from above.

Take the dozens of tweets sent this month in honor of Pride Month by the New York Federal Reserve Board of all entities, for the 50th anniversary of the Stonewall Riot against anti-gay New York cops. One tweet just showed a woman, presumably lesbian, saying, “I’m Gil. I grew up in the DC Metro area. I have a degree in Sociology, and find people and cultures fascinating. I’m an avid cross fitter, and enjoy renovating my 100 yr old home. I also TNVR (trap, neuter, vaccinate, and return) feral cats in my neighborhood. #MomentsofPride.”

I guess there’s nothing objectionable about that—which is how you know that which once warranted a riot is now the establishment. The vast institution that decides what interests rates will be and where a significant portion of all money flows—ostensibly without regard to petty, shifting electoral politics—wants us to know it likes gay people. Okay.

Granddaddy of the populists William Jennings Bryan, a decade and a half before the 1913 creation of the U.S. Federal Reserve, nearly sparked a revolt by urging that silver, not just gold, be used as a national monetary standard. I can’t imagine he foresaw that one day we’d be on neither a gold nor a silver standard— but a powerful fiat-currency central bank would be weighing in on the question of whether gay sex is shameful.

So I can understand populist culture-warriors in the Pat Buchanan mold hoping for an uprising by the masses that’s less a matter of specific economic policy than of pressuring the elites to stop behaving like a culture unto themselves divorced from the interests of ordinary citizens—but after a century, those populist would-be rebels still they find themselves up against elite institutions such as the Federal Reserve (not that the current right any longer cares much about the issue of sexual orientation per se).

The current populist wave, though it may not look intellectually sophisticated or high-tech, is a big step in the direction of fighting over “mindshare,” if you will, rather than, say, market share or share of the tax burden. By mindshare, I mean a portion of the citizen’s brain, in a sense that fuses religious-style culture wars, market-spawned ratings struggles, slimy subliminal tech nudges, and overt governmental messaging. The more information-oriented society becomes, the more we should expect “infowars,” so to speak, and not be shocked if they’re fought simultaneously on multiple fronts: social media, electoral campaigns, film plots.

The Christian fundamentalists and left-wing deconstructionists alike should be delighted, in a way, to see culture getting its due instead of just being one more item on a list of mostly-materialist political priorities such as energy production and agricultural subsidies.

But this means left-liberals such as Biden get to play the easy, default, bourgeois role for so long played by centrist Republicans: gently assuring the public (and their bosses) that although there are some real crazies, anarchists, disrupters and loudmouths out there today, my campaign will not really be in league with them. Right, left, whatever—I’ll be the non-crazy guy. You know you’re exhausted. You know change is confusing. Relax. Unwind. Let me massage your shoulders a bit. Everything’s as it should be, you’re right back where you should be, let’s leave the chaotic times behind.

If Biden merely manages to act unfazed by Trump and the leftist radicals in his own party, he may eke out a victory even more soothing to the lazy American psyche than Trump’s assurance that nothing matters.