Why Mitt Romney Is No Dumber Than You Are

And why it doesn't matter. 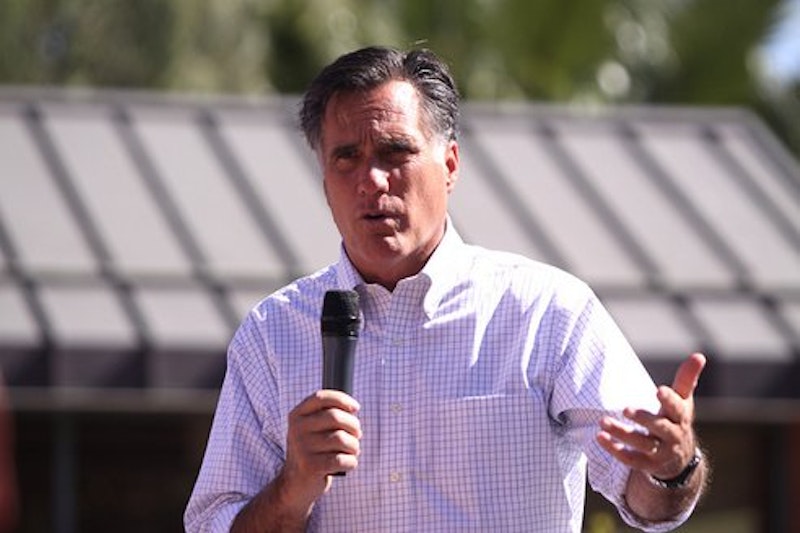 The past week has seen everyone's sense of probability come unsprung. Mitt Romney is to blame, of course. I think the “47%” video may have made the difference. With the video, Romney's election effort went from a mere failed campaign to a campaign without pants. Now people don't know where to look. Their eyes are on the ceiling and their thoughts fly about. A painful sort of limbo has been created; freak social occurrences seem possible. Anybody who has seen Romney on television has felt this effect. It's bigger now. It isn't the effect of one man standing there, but of the vast electioneering apparatus he put together. The campaign is Romney's pants-less Frankenstein, and it has the nation's election watchers socially boggled.

So maybe Romney really suggested you should be able to roll down airplane windows. Two right-wing bloggers, Allahpundit and the Lonely Conservative, believed that he did. They hotly explained that the candidate was thinking of lower-than-normal airplane altitudes, ones where airplane cabins would not need pressurization. They said that, obviously, Romney envisioned an emergency maneuver in which a pilot might drop to such levels, thereby permitting the rolling down of the windows and the entry of fresh oxygen. A special control on the pilot's panel would keep passengers from trying to open the windows on their own, the Lonely Conservative wrote. Liberals, of course, had a great time about Romney's doltishness, all except a concerned James Fallows. He said Romney had been in distress over his wife's situation on the plane (there had been an in-flight emergency) and had done the best he could under the circumstances.

Then the pool reporter who had picked up the candidate's window comments clarified that Romney had been joking. The explanation seems self-evident as soon as it's presented. The question is why nobody thought of it on his or her own. Allies and enemies, the sneering and the concerned, they all agreed that, yes, Mitt Romney thought airplane windows should go up and down, like car windows.

The same week a Nobel Prize winner fell for this sentence: “Reportedly, he has been marching around his campaign bus, saying things like, 'If Stench calls, take a message' and 'Tell Stench I’m having finger sandwiches with Peggy Noonan and will text him later.'” Paul Krugman thought the preceding was factual information about candidate Paul Ryan as passed on by a news columnist. Instead the passage was a case of the news columnist, Politico's Roger Simon, larking about. Obviously: “Finger sandwiches with Peggy Noonan”—come on. Even “saying things like” sticks out. But the column tricked Krugman, Taylor Marsh, The Maddow Blog, Gawker, The Moderate Voice and Ann Althouse, among others. That's four liberals, a centrist and a conservative (who was posting on Instapundit, the pioneer and granddaddy of right-wing blogs). Like Allahpundit and Lonely dealing with the rollable windows, Althouse was in there explaining how Paul Ryan has a quirky sense of humor. She actually believed that the candidate for vice president was prancing about, calling his partner a rude name for comic effect. It's been that sort of time.

Gawker, stung by the Ryan fraud, responded this way: “Satire requires an object—a thing being satirized. What was Simon's point? Who was he making fun of?” A good question. Sift through the evidence and you can decide the column says this: People are silly to talk about Ryan's supposed restlessness and his supposed desire to power up the campaign and break out the charisma. But somehow I doubt that Simon would stand by either idea. The piece doesn't argue that there's some reason to doubt that Ryan is restless. And its only argument that Ryan lacks charisma is that he uses PowerPoint presentations. (This part of the column falls into “rant” style, something Dennis Miller and my office mates inflicted on people during the 1990s.) It looks like no thought went into what he said. Simon's head foamed over and this particular column was the result. It was generated by sheer overexcitement. Kids bounce around when it's rainy out; Simon gets his head twirled by the sight of Mitt Romney's collapsing campaign and gallant Paul Ryan.

“Saying things like.” And, come on, Mitt Romney isn't Dan Quayle. If he's going to make a fool of himself, it won't be over matters of elementary knowledge. To believe Romney is a slackjaw is to believe any crummy, outlandish thing about him must be true just because he's Mitt Romney. The thing is, yes, liberals have reached that point, but I think conservatives aren't so far off. Once you have convinced your supporters they may have to defend you for wanting rollable airplane windows, you have put them in a situation of psychic pain. Like everyone else, they're there with their eyes on the ceiling, trying to guess what you may do next, wishing you would go away.