Despite hype, don’t expect Romney to boost his chances. 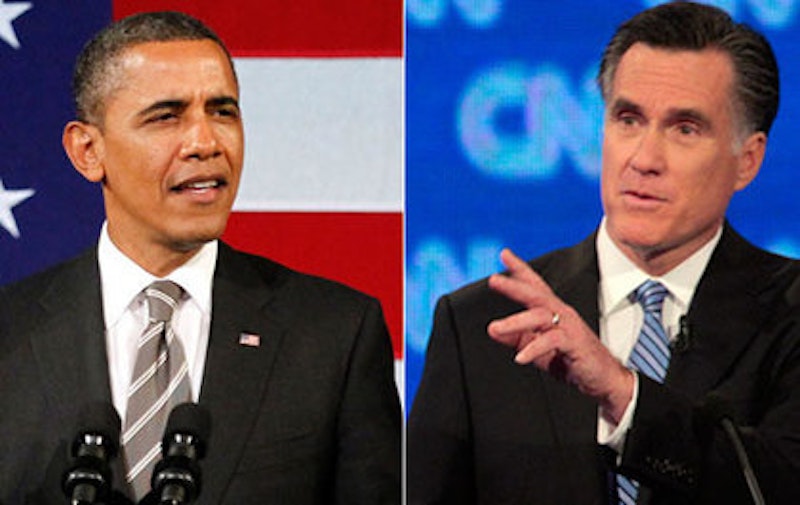 Debates are difficult to win but easy to lose. That is especially the case when the two candidates are not stellar debaters and are prone to gaffes, Mitt Romney moreso than President Obama. It’s all the more surprising because both are Harvard Law School graduates who had to participate in “Moot Court” debates to collect their degrees. In Obama’s case, a brilliant orator is not necessarily a skillful debater. With Romney, to put it charitably, the guy just doesn’t seem to have anything to say. Obama’s all cogito, ergo sum, and Romney’s a grab-bag of MBA pixie dust.

The early line on the first presidential debate on Oct. 3 is that the face-off between Obama and Romney is a make-or-break moment for Romney, who trails Obama in virtually every major poll and in all nine battleground states, especially in the crucial battleground states of Ohio, Pennsylvania and Florida. And in Virginia, where Obama in 2008 became the first Democrat to win since 1964, Obama is five to eight points ahead, depending on the poll. No Republican candidate has ever won the White House without carrying Ohio. And only one Democrat in 75 years—Jimmy Carter—has been ejected from the White House after a single term. The Electoral College map is a daunting maze for Romney.

Both campaigns are busy performing their pre-debate rituals. The Obama nomenclators are attempting to lower expectations by pointing out that as president Obama also has a day job that inhibits his time for debate practice. To the contrary, the Romney team is advancing their candidate as an attack machine who will enter the arena ready for deadly combat. The debate is Romney’s final chance to reverse Obama’s momentum in the polls and voter delivery system on the ground. And, for good or ill, the media is the debate scorekeeper.

With and estimated viewership of 60 million, the debates are the largest audiences both men will address in a rare opportunity to speak to the nation on such a large stage. Debates do little to change voters’ minds unless there’s a major blunder by one of the candidates. Debates serve more to reinforce what viewers already believe and who they support. After more than 50 years of study and discussion about the first television debate between John F. Kennedy and Richard M. Nixon, the conclusion is this: Those who saw the debate on TV believed that Kennedy won; and those who heard the debate on radio believed that Nixon won.

The treacherous point in this year’s initial confrontation, however, is that early voting is already underway in some states even before the first debate occurs. Early voting has already begun in Iowa and gets underway in Ohio on Oct. 2, a day before the first debate. A major blunder or a poor performance by either candidate not only in the first debate but in the two subsequent meetings could have a direct effect on voting patterns long before election day on Nov. 6. Thirty-one states allow early voting and 22 states permit absentee ballots. In 2008, 22 percent of the voters cast early ballots. (Early voting in Maryland begins on Saturday, Oct. 27.) So in that sense, the presidential election could be well on its way to a decision before Election Day.

Obama and Romney each enter the debate with an advantage and a disadvantage. Obama is the incumbent president with a four-year record to defend as well as an opportunity to provide a roadmap to the future. Facts, figures and an abundance of information are his strong points. The economy is his soft spot. Obama has a professorial way of lecturing with complex, winding sentences instead of the more effective go-for-the-gut one-liners.

Being on the same stage with the president automatically elevates the status of the challenger. Nonetheless, Romney has demonstrated time and again that he can be reckless with information and willing to say anything, in person or in his advertising, to reverse his sagging campaign. He has repeatedly reversed positions to accommodate situations and to cover up gaffes.

Through nine debates during the Republican primary campaign, Romney was solid but unconvincing and unable to lock up the nomination until July. Nonetheless, they were practice sessions that Obama hasn’t had in four years. By contrast with Obama, Romney has been unwilling, or unable, to fill in the blanks in most of his vague proposals. Romney has no central message which is the key to a debate. That could very well be the first question he gets.

When the debate ends the spin begins, this year more than ever before. The 2012 election is the first social media presidential campaign. The political discourse is dominated more by Facebook and Twitter than what the candidates actually say in debate or on the road. The entire nation is on edge waiting for one candidate or the other fumble, bobble, have a memory lapse or otherwise fall flat on his face. Gaffes this year receive more attention than policy manifestos.

When Obama and Romney step forward to engage in debate, they will have been primed in rigorous cram sessions by consultants, pollsters and rehearsal stand-ins to appear relaxed, confident and in command of information. After all, they’ll be visiting in people’s homes. The four most important lessons every candidate learns about television debates are: (1) Ignore the question and say what you want to say; (2) Very few people remember either the question or the answer. Viewers only remember how candidates look and sound; (3) The camera with the red light is the one that’s working. Don’t stare at it. (4) The people who rehearse the candidates ask far tougher questions than the panelists toss during the actual performance.

Candidates like to be comfortable with their material. Despite panelists’ questions, the candidates will be giving speeches instead of answers, speeches that they’ve delivered hundreds of times during the campaign. The risk, however, is that familiarity can convey tedium.

Caution is the watchword. Variations and departures are slight, because any degree of drift from the familiar script increases the danger of error and gaffe. In a formal debate structure, the sound of the time-limit bell or buzzer is often a welcome relief for both the viewers and the candidates. A polished and skillful candidate never cringes or ducks when asked a difficult question but usually remains calm, poised and responds by making another point. Few in the viewing audience will recall that the question posed was not the query that was answered.

The candidate with twitches, tics, blinks and other distracting mannerisms is at a disadvantage. Rubbing hands, drumming fingers or riffling papers will transmit nervousness and have viewers fidgeting and squirming in their seats, too.

Presidential debates are little more than boring job interviews. Obama and Romney are applying to the public for the job of president. Obama actually is seeking to be re-hired, thus the Romney motif of are you better off than you were four years ago. Ironically, a debate is no place for a debate. No one in the viewing audience wants his favorite candidate to get beat up by a bully. Bad manners can cost votes. The name of the game is to appear presidential and above rowdyism. And remember, the viewer in the corner tavern is seeing the debate differently than the person in a living room or den. The bar is where appearances really count, because often the sound is turned down. If the sound is up, one provocative statement can start a Dodge City brawl.

Cool wins on television. Cool is harnessing the audience as a workforce. Kennedy had it, Nixon didn’t. Ronald Reagan had it, Jimmy Carter didn’t. Bill Clinton had it, George H. W. Bush didn’t. John Kerry had it and blew it. And there are those who would argue that Obama has a surplus of cool while Romney has the emotional range of a loaf of Wonder Bread. Cool in debates is about getting all of those viewers off their butts, into their cars and out to the polls.