Government is the Glue that Holds America Together
Frank A. DeFilippo 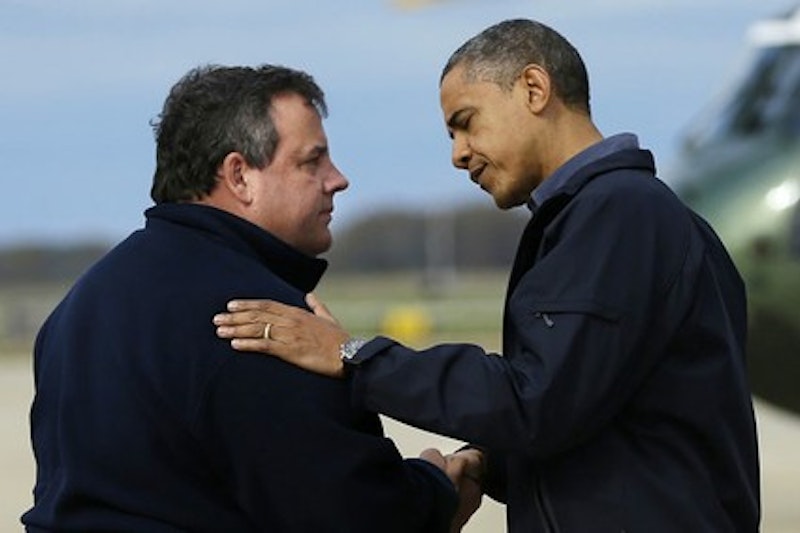 The anti-government banshees and Tea Party budget hawks who believe states and the private sector can deal with acts of nature ought to take a lesson from Hurricane Sandy, the tunnels of New York and the shoreline towns of New Jersey. The private sector doesn’t have FEMA; it cannot issue executive orders; it cannot declare disaster areas; it cannot mobilize the agencies of government; it cannot marshal the military into a force for rescue and safety; it does not have a Coast Guard to rescue sailors who abandoned a sinking ship; it has no Army Corps of Engineers with a storehouse of pumps; and it won’t invest the money to rescue a coastal population of 80 million unless it’s guaranteed a profit.

Nobody realizes that more than the governor of New Jersey, Chris Christie, the Republican Party’s human trumpet and formerly a top surrogate for the GOP’s presidential candidate, Mitt Romney. Now, to the befuddlement of the GOP and the consternation of Romney, Christie is suddenly President Barack Obama’s best friend and photo-op buddy. Christie knows that when his state needs money and help, it’s foolhardy to dial 9-1-1 or call the state house chaplain. Savvy governors call the White House.

Yet it was Christie’s own party leader, Romney, who not long ago promised as part of his plan to shrink government, who said that he would eliminate FEMA by defunding it and shift its functions back to the states or, better still, as he put it, turn it over to the private sector. If that were the case, theoretically, New Jersey and New York would sink into the ocean while the MBAs at Bain Capital work to quantify their decision, as they say in wonk world, as to whether the rescue effort could return a sufficient profit on their investment or to cherry-pick the assets and put the rest into bankruptcy. That’s what MBAs like Romney do.

And as is typical of Romney, here’s the latest case of the old reverse English: On the same day that Obama was touring the wreckage of New Jersey with Christie, Romney’s campaign—not the candidate, mind you, but the campaign—issued a benign statement saying that Romney supports the efforts of FEMA.

But four days after praise for FEMA and applause for Obama’s handling of the disaster, Romney’s campaign issued a second statement: “I believe that FEMA plays a key role in working with states and localities to prepare for and respond to natural disasters,” adding that Romney would continue funding FEMA to work with the states and localities “to get aid to the individuals and communities affected by natural disasters.” Will the real Romney please stand up.

A background check: FEMA, the Federal Emergency Management Agency, has on and off been kind of a stepchild federal agency, especially under Republican patronage. FEMA was left to wither under George H. W. Bush but was reorganized and strengthened by Bill Clinton. It was again ignored by George W. Bush and placed under the direction of a political hack, Michael Brown, who botched the job completely during Hurricane Katrina and the devastation of New Orleans. Bush, nonetheless, famously praised Brown for a “heckuva job, Brownie.”

Under Barack Obama, FEMA was totally rehabilitated and is alive and well and kicking butt in Hurricane Sandy’s wake of destruction and loss of lives and property. In the case of Hurricane Sandy, FEMA had adequate advance warning and was nimble enough to have equipment and personnel in place when the storm struck. FEMA’s director is Craig Fugate, the former director of the Florida Emergency Management Agency.

Luck occurs when preparation meets opportunity. Though nobody wanted it, expected it, intended it, Obama was serendipitously handed a commander in-chief moment in the clawing final days of the presidential campaign which prompted Christie to observe that “the president has been all over this and he deserves great credit.” (Equally fortuitous was the announcement that the economy added 171,000 jobs last month as well as the endorsements of Colin Powell and New York Mayor Michael Bloomberg.)

When the two appeared before the microphones in the ravaged New Jersey town of Brigantine, Obama returned the compliment: “I want to just let you know that your governor [Christie] is working overtime to make sure that as soon as possible, everybody can get back to normal,” according to reports.

The optics of Obama and Christie walking shoulder-to-shoulder, embracing citizens and exchanging private phone numbers is more than symbolic. It is an object lesson in bipartisanship and common purpose that is not lost on the voters of America and another one of the many instances in this campaign that is difficult to discern how perception translates in the voting booth.

Only a couple of weeks ago, at a Romney rally, Christie characterized Obama as being “like a man wandering around a dark room, hands up against the wall, clutching for the light switch of leadership, and he just can’t find it,” according to The Washington Post. The wonderment is how circumstances change times and tunes.

Nations swing constantly between tyranny and anarchy. What the new Obama-Christie friendship signifies as much as anything else is that government is not the enemy of the people, as many Republicans contend. Government is the glue that holds Americans together. And as it has evolved over more than two centuries, government is in the quality of life business, here to make certain that the people it serves are safe and secure.

There are, simply put, certain functions that private business cannot perform and that the states, on their own, are ill-equipped to carry out. Christie recognized that and so, too, did Obama, whether they are fair-weather friends or beer-buddies for life.

Republican motives, such as Romney’s and those in Congress, go beyond simply wanting to dismantle federal programs as a way of shrinking government and reducing the deficit. Their purpose is twofold: Abolishing programs is a direct attack on the majority Democratic constituency and eliminating social programs would discourage and diminish that voting bloc. And it is an ironic turn of the screw that in many instances, such as senior citizens who tend to vote Republican, people are inclined to vote against their own interests such as Medicare.

And second, turning programs over to the private sector is based on the profit motive and not on service to people. And in many cases where it has been tried, i.e., privatization of highways, prisons, state hospitals and schools, the experiment has been a disaster that has led to huge debt, bankruptcies, reduced service and poor results.

Christie certainly knew what he was doing when he buddied up to Obama. At one count they shared six phone calls—probably more by now—and an ego-tripping ride on Marine One for Christie. And it wasn’t too long before the backhoes and the forklifts began rolling in and the pumps were emptying Hoboken and New York’s subway tunnels of millions of gallons of toxic water. And the National Guard, now on the federal payroll under disaster area declaration, was evacuating stranded citizens and powerless hospitals.

The cities and the beaches will be resuscitated and replenished, the roads will be cleared and the subways will be rolling and commerce will resume. And it will not be done by venture capitalists or hedge fund operators or bank presidents. It will be accomplished by government. It will be done by we, the people.

The clash of ideologies on the role of government offers a stark choice of what kind of an America we want—an America that is a partnership of government and the people or a nation that takes us back to the days of Herbert Hoover who at the onset of the Great Depression famously said that private charities can take care of the downtrodden and the dispossessed. Which is exactly what Rep. Paul Ryan, Romney’s running mate, repeated when he unveiled his deconstructed budget which would gut most social programs as well as FEMA, by 43 percent.