The Smug vs. the Stupid

A pox on the virulent Romney and Obama supporters. 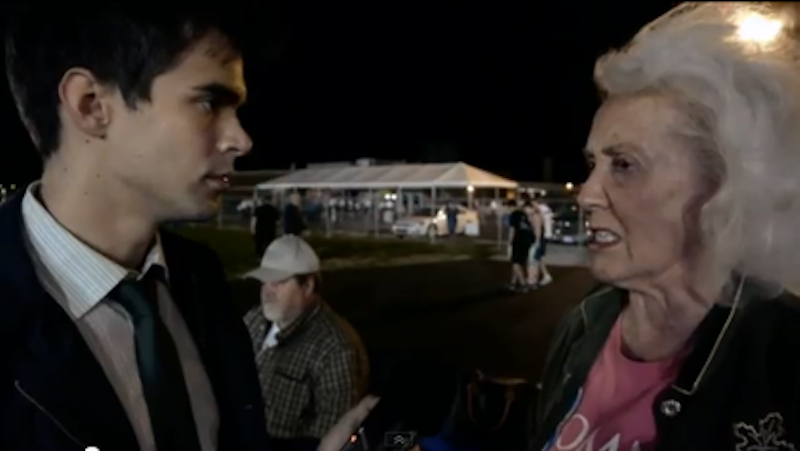 With the election two days away, New Left Media has gone into the field to interview Romney partisans in Ohio, the voters who, as they say, "may choose our next President." Josh Marshall at Talking Points Memo looks upon these voters and sighs in despair. "Can’t say I’d be terribly surprised if we were seeing some of the biggest idiots among Romney’s supporters at the rally," he says, holding out the semi-ironic hope that, perhaps, somewhere among those Romney supporters is someone who is not an idiot.

I certainly get the appeal of this kind of lefty sneer. I'm a lefty myself, and am frequently gob-smacked by the idiocy of what passes for sequential thought on the right. True to form, at this rally, various average folks declare their allegiance to Romney and their opposition to Obama… and then, when asked for reasons, spout stale talking points and paranoid fantasies while muttering vaguely about Romney's "plans" before admitting that, in fact, they have no idea what his policy positions are, or how they differ from the President’s. One particularly agitated woman fulminates about Obama's attendance at the Christian church of incendiary pastor Jeremiah Wright one minute and in the next breath declares Obama to be a Muslim. When she's asked to reconcile the two positions, she simply refuses to recognize that there is any contradiction and then calls him an atheist to boot.

So, again, this is all fairly ludicrous, not to mention disheartening. But I wonder… are these people really stupid because they're Romney supporters, as NewLeftMedia and Josh Marshall imply? Or are they stupid because they're simply typical Americans? The vast majority of people in the country, after all, don't know very much about politics. A recent study found that fully 40 percent of Americans don't know which party is pro-choice and which is pro-life. The diehards at the Romney rally are doing better than that. The nutty woman who thinks Obama is a Muslim and an atheist at least knew who Jeremiah Wright was—and she also, for that matter, knew which candidate is pro-life and homophobic. That probably makes her better informed than the majority of her peers, whether Democrat or Republican.

I suspect that, overall, Romney supporters are in fact somewhat more confused than those who favor Obama, but I don't think that's because they're more stupid than Obama partisans. Rather, it's because Romney, both for strategic reasons and because he is by nature a lying sack of shit, has been unusually vague about his platform and policies. A number of the interviewees in the video, as I said, admit that they aren't exactly sure what he'd do in the White House—and they also seem to express a wish that he'd be a bit clearer about his intentions. This is pretty reasonable. More reasonable, in fact, than the Romney endorsement by David Frum, in which the supposedly savvy pundit pretends that Romney won't push for war in Iran and won't repeal Obamacare despite his campaign rhetoric. Who is more of a fool, the low-info voters who acknowledge that they aren't sure where the candidate stands, or the high-info Washington guru who knows what the candidate says, but chooses to disregard it because he'd rather not believe it?

It's worth noting that, even if Romney is more duplicitous and confusing than Obama, that doesn't mean that Obama is straightforward and clear. I've heard reports of voters in Ohio opposing Romney because he's anti-coal, a ridiculous assertion which Obama has made repeatedly in statewide ads. And I'm sure that if you went to an Obama rally, it wouldn't be hard to find people who are voting for the President because they think Romney plans to ship jobs overseas, or because they think he's both a radical right-wing nutjob and a flip-flopper, or, alternately, are voting for the President for reasons they are completely unable to articulate. I'd bet that a large number of Obama supporters don't know that he's dropping bombs on children in Pakistan, or that he's deporting people from this country at an unprecedented rate. I voted early for Jill Stein, and I barely know how to spell her name, much less what her specific policy positions are.

Democracy is rule by everybody: rule by the ignorant. This is not ideal, but the alternatives (rule by Marxist technocrats, for example, or by military thugs) are worse. So we stumble along, hoping we don't dumb ourselves into oblivion. In the meantime, the right tell themselves they're paragons of morality and the left tell themselves they're paragons of intelligence. Each accuses the other of smug hypocrisy, and watching this video, it's clear that each has a point.