Bill Clinton's No Longer Such an Irritant

In an Esquire interview, the 42nd president comes off (for a center-left Democrat) as affable and even reasonable. 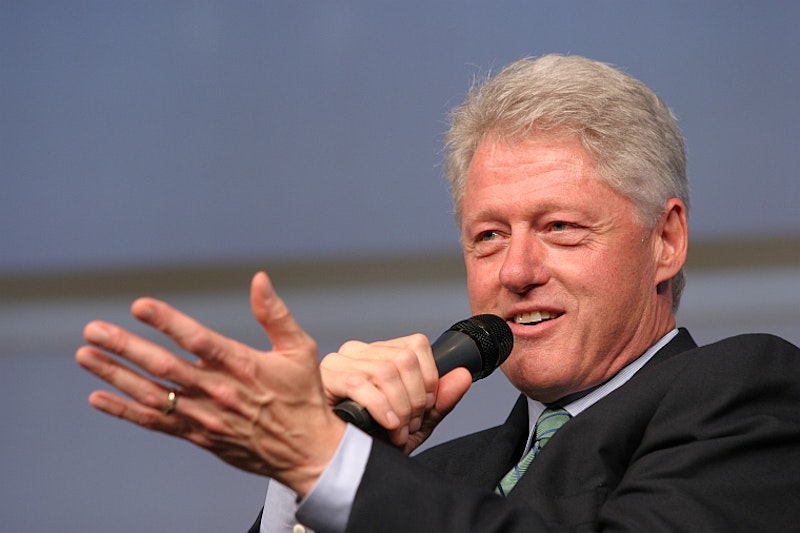 Every now and again, 65-year-old Bill Clinton takes a breather from his lucrative post-presidency career of making speeches for the highest bidders, as well as promoting good will toward men, and gets back to his true love: politics. Like about half the American population, I couldn’t stand Clinton when he was in the White House, but as he ages and isn’t either lionized or trashed in the media every day, he’s sort of like an old ABBA or Aerosmith song, a onetime nagging irritant that just isn’t so important anymore. Clinton’s disgraceful pardon of Marc Rich? A footnote. His refusal, on supposed legal grounds, to accept the handover of Osama bin Laden from Sudan in 1996? A colossal mistake, obviously, and if the rascally Arkansan has a conscience—up to debate—something that may cause him to lose sleep at nights. Oh, and let’s not forget that the newly elected president didn’t even visit the World Trade Center site after the botched terrorism attempt in 1993, one in which six people lost their lives and over 1000 were injured. I guess everyone has their own list of Clinton transgressions, and mine could stretch from Bangor to Key West, but dwelling on them in the 21st century is fruitless; a lesson the Port Huron survivors who shuffled their creaky bones to an Occupy Wall Street protest never learned.

The United States’ 42nd commander-in-chief, who croaked aloud to any number of historians that if only a war had occurred during his eight years in office he might be considered a “first-tier” president, was shuffled into irrelevance by two events: 9/11 and the 2008 economic collapse. He did cause a stir in the ’08 Democratic primary, bad-mouthing Barack Obama in hopes of hoisting his wife Hillary to the nomination, but her advisers quickly muzzled the voluble Bill and he’s been on good behavior ever since. Last weekend, I enjoyed reading a Clinton interview in the February issue of Esquire—nauseatingly reverential on the magazine’s part—and though I’m certain his informative words were lost in the current political latrine, Bill was in top form.

For example, unlike Frank Rich’s Feb. 6 New York magazine hit job on Mitt Romney—a Mormon-bashing article dressed up as another search for the GOP front-runner’s pulse—Clinton got off the best one-liner I’ve seen in months about the man who’s compared to past presidential also-rans like Walter Mondale, Michael Dukakis and Bob Dole. Sizing up the GOP field, Clinton said: “[N]ow [Newt Gingrich] is just like Romney. Neither on them can say what they believe to be true and get nominated. Romney’s still trying to figure out what he did as governor of Massachusetts and still appeal to this driving vituperative energy [of the “real hardcore far-right groups that come to define conservatism”].”

Now that he’s not running for anything, Clinton can be more honest than his fellow Democrats, who bemoan the fantasy of an American media controlled by conservatives. He says:

I also think the diffusion of the media has complicated things. For example, I was just watching MSNBC, and they had a woman that used to work for me and a couple of other people on there, and they were talking about the Republican primary. And I was laughing. I said, “Boy, [MSNBC] really has become our version of Fox.”… And so the good news is you can get a lot of information off the Internet for free and in a hurry. But I think the breaking up of the media, which is otherwise kind of healthy, has contributed to less actual reporting and a louder, more contentious, more divisive public discourse, highlighting conflict, sometimes falsely.
Granted, Clinton is self-aggrandizing during the interview—boasting about his humanitarian work, ability (unlike Obama) to get along with Republicans and pass bipartisan legislation and affirming his membership in the Warren Buffett/Bill Gates club of asking to be taxed more—but, as he says, since he’s not politically active, at least on a daily basis, the man comes across as more likable, even refusing to demonize his successor George W. Bush.

Who knows, maybe Clinton has had a clandestine rapprochement with former pollster Dick Morris, leading up to a 2016 Hillary presidential campaign, but at least on the surface, he’s making a go at becoming an elder statesman that even Republicans can listen to without instinctively retching.