A Santorum Revival in Florida? Yeah, Why Not

The fractured Republican race may be about to get crazier. 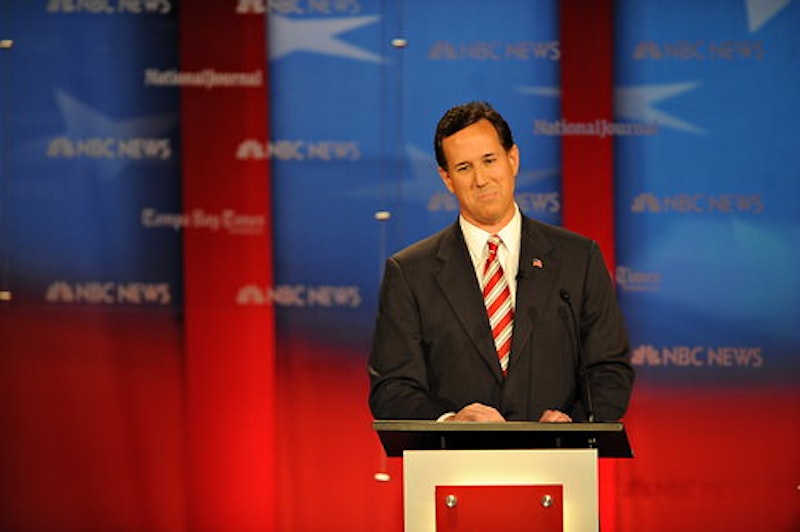 It’s possible Rick Santorum may beat Newt Gingrich in Florida. A win is probably out of reach, but runner-up behind Mitt Romney seems possible. The second of the two pre-primary debates was held last night and Gingrich didn’t manage to put anyone away. He made a move at Wolf Blitzer but lacked the mojo to pull it off. Wolf Blitzer—that’s a comedown. He looks like he was designed to be mugged, but people started booing and Newt had to draw back. Blitzer wanted Newt to repeat his charges against Romney right there on the stage, and Newt tried his old ploy of saying a debate was too august a venue for such media preoccupations. But now the candidate-to-candidate charges are everyone’s preoccupation. “OK. All right,” Gingrich said. For his part, Santorum landed hard on Romney about health care, and he was forceful and hoarse about bad things hatching in Latin America. And anyway, he’s due.

A normal primary season may see a spell of buyer’s remorse, when voters put one candidate far in the lead, then swing back to look again at the other candidate. This year Republican voters are swinging through so many set, repeating pivots that it’s like they aren’t trying to make a decision, just evolve a dance. Newt had his December surge and collapse, and then Santorum had his Iowa breakthrough and fade. Now Newt is surging again. No, was surging: his polls have slumped abruptly just days after he scored big in the South Carolina primary. It may be the voters have decided to put both candidates through the same rise and fall as before, but faster. In which case Santorum is about to get some headlines on Tuesday.

Certainly, Newt did not score in the week’s two debates. The first, on Monday, seemed to be a tiring occasion for everybody, and Newt couldn’t get people in the audience to cheer because NBC mandated quiet. The next day he announced on Fox that he would boycott any more debates with silenced audiences, and that or something appears to have had an effect. Last night’s crowd was permitted to act like a crowd, but Newt didn’t get more in the way of noise than his competitors. Everyone seemed fresher than the last time, including Newt, and he and Romney picked up their back-and-forth over the money Gingrich collected from Freddie Mac. Gingrich’s attempt to pin Romney as a fellow profiteer off Fannie Mae and Freddie Mac because of Romney’s proceeds from a mutual fund ran into Romney’s retort that Gingrich also invested in a mutual fund that had holdings in Fannie Mae and Freddie Mac. It seems like an obvious point, but Gingrich wasn’t quite ready for it.

Romney kept his chin up through the tussle, his voice didn’t flake apart, and he had none of those moments when he spasms between misfired response attempts, hoping some referee will come along and tell him what his face is supposed to be doing. Santorum spoke up well, forceful instead of hangdog, a shrewd, muscular young man of 53 whose fists ball up when he thinks of Venezuela, Cuba, and what we did to Honduras (let down the coup plotters). Ron Paul flailed away at his points, though nothing about race this time around. And Newt did not dominate. “There is something so grotesquely hypocritical about the Romney campaign,” Newt said at a Tea Party rally on Thursday. But that evening he was more circumspect. Romney took notice. “Wouldn't it be nice if people didn't make accusations somewhere else that they weren't willing to defend here?” he asked.

It’s not that Newt stopped being the best debater. But he didn’t bulk out his performance until debating passed into pro wrestling. Romney didn’t fell apart, and meanwhile all those dollars are putting Romney ads on the air. Or maybe this is the year when no surge can go un-snuffed, when the electorate’s nervous system is so disordered that Santorum will find himself flung into the spotlight again.

Another Newt deflation. Newt started the week with big leads in the Florida polls. By mid-week he was struggling. On Monday The New York Times’ Nate Silver put Newt ahead of Romney by 13 percentage points. Two days later, Silver put Newt’s lead at two percentage points. One poll, for the Jacksonville Times-Union, showed Romney gain 14 points in that same space to take a narrow lead.

Romney has been spending in Florida for a while and stepped it up following Newt’s eruption in South Carolina. As of Thursday, the figure for the Romney campaign and super-PAC was $15.4 million, with the super-PAC accounting for more than half. The Newt forces had spent $3 million; more than 90 percent of that being super-PAC money.

The Gingrich campaign hadn’t raised much money, or done anything else except follow Newt Gingrich around, between his December fizzle and his South Carolina nova. The super-PAC’s greatest known source of money is Newt’s friend and sometime patron, the casino billionaire Sheldon Adelson. He gave Newt’s super-PAC $5 million to see it through the South Carolina primary, with more to follow depending on performance. Newt’s triumph with that $5 million didn’t really open the taps. Instead Adelson’s wife followed up on Monday with another $5 million check.

Newt and chili ice cream. It’s frustrating. The Republican base has a thunderbolt, and then the thunderbolt goes away. Somebody ought to poll South Carolina and find out if the Republicans there are still happy they voted for Newt. I suspect that the inflation-deflation of Republican hopes and enthusiasm takes place across the country; that’s what polls indicated back in the pre-race and then when Newt was wiping out in Iowa and New Hampshire. It’s not that Florida presents difficult rapids, just that this week the base is not in a Newt mood.

They’re a feverish bunch, and these flash floods come and go. The most reliable gulch for their enthusiasms is Newt, one of the best talkers in a party rich with mouth talent. But last December the waters rushed off after a dizzy few weeks. If he fails in Florida, his second rise will have been a dizzy few days, which suggests he’s headed downward. Newt has to wonder why destiny is waving its cape at him this way. He’s Napoleon, he isn’t Napoleon…

Perhaps a lobe of my brain has been taken over by Peggy Noonan. At any rate, it occurs to me that Newt is like chili ice cream. People who like chili ice cream probably like it a lot or they couldn’t eat the stuff. But they don’t like it for long. The taste comes and goes, and sometimes it doesn’t come back. And even when you like chili ice cream, you can’t believe you’re eating it.

Romney and the Chinese central committee. I mentioned that he held together more or less well in the Thursday debate. On Monday he held together less well, not more. He kept at Newt about Fannie Mae for the eight or 10 minutes allowed by Brian Williams. But as usual with his attacks, he inspired thoughts of hapless people: maybe a tourist who has nerved himself to complain about a bill in a foreign restaurant and keeps worrying that someone will tell him to speak the language. Romney hung there, head and shoulders forward, waiting for a merciful soul to come along and tell him he was right.

In the meantime he wrestled with burdensome, droopy sentences that sounded like they came out of speech translator software. Language is something he takes part in for the sake of others. It’s imposed on him because of his desire not to make trouble, and then he has to deal with the results: word chains like bedraggled feather boas that make his chin twitch and tickle his nose. He’s allergic to the things, but we won’t let him get away from them. (From the morning of the debate, to reporters: “He’s gone from pillar to post, almost like a pinball machine, from item to item, in a way which is highly erratic and does not suggest a stable, thoughtful course, which is normally associated with leadership.” Only Romney could try to call Gingrich a nut and sound like a Chinese central committee communiqué.)

Santorum’s sad face. Rick Santorum looks like a young aide in the Nixon White House whose face has been worked over by Photoshop. The mouth has shrunk down and the nose grown out, and the two of them wedge themselves nearer each other than seems healthy; it’s like they’re being exclusionary to the rest of his face. All this is under his squared-away haircut and above his Republican collar and tie and a pair of plank-like broad shoulders. The small features don’t dance, because Santorum is not often merry, but they flex and quirk, and do so together. A Santorum look of incredulity stands out like a vein on a bodybuilder. Mitt Romney has stopped himself in mid-discourse to remark on the effect.

Last night Santorum’s face was having a workout. He added a move that I suppose was from the heart. Newt was jolly with Ron Paul about his age, which raised a laugh, and Newt turned to Santorum like there was too much fun for him to keep to himself. Newt had a dark, triangular little notch of a smile and a “Wouldn’t you know it, bud” look on his face. Santorum looked at him, sort of, but more past him. Sadness settled over his face. As so often, he had to wait out the stupidity of the world before getting down to business.