Attacking the media during debates is a technique to manipulate audiences and prove you're the toughest guy in the room. 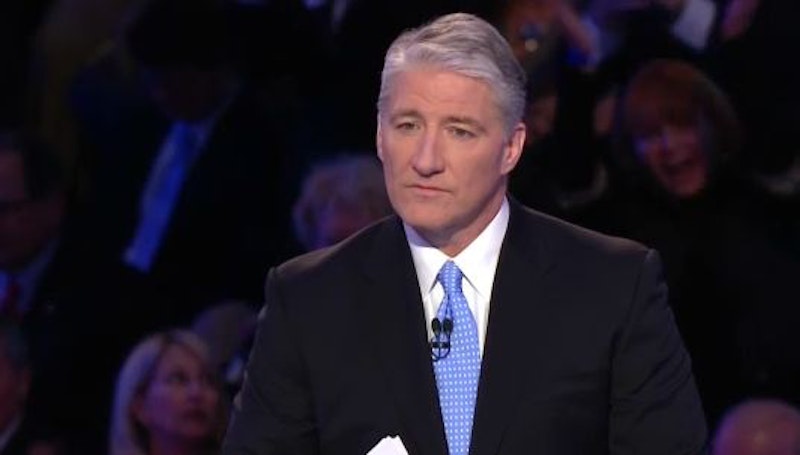 The foam-at-the-mouth crowd was ready and waiting in the spring of 1964 in the lime-stone armory in Cambridge, on that primeval bog known as the Eastern Shore of Maryland. Alabama Gov. George C. Wallace (D) did not disappoint the demonstration-weary locals who had come to hear his message of segregation forever. He roused the overflow mob to visible anger with his attack-dog lashes at the media, lumping the assembled reporters with the “pointyheads” and “social engineers” in Washington as the cause of America’s embattled civil rights era of the 1960s.

The frenzied crowd, hissing, booing and shouting, with clenched fists raised above their heads, turned hostile on the scrum of reporters, ready to rumble and only calmed down when the late Sen. Frederick C. Malkus (D), the local political patriarch and protector of the status quo, stood and shouted to the crowd: “They’re okay. They’re friends of mine from Annapolis.” Malkus was referring to the State House press corps of political and government reporters who follow the breadcrumb trail of campaigns. After the rally, a genial Wallace came down from the stage to mingle and banter with the very same reporters he had vilified and terrified during his speech.

Wallace would repeat the performance at rallies across the state. But nowhere was he more welcome than on the Eastern Shore, which had endured two years of racial turmoil and occupation by the Maryland National Guard. Wallace was running for president that year, as he would several times later, and came within a slim 50,000 votes of defeating Sen. Daniel B. Brewster (D) who was running in the primary election as a proxy for President Johnson.

Fast forward to 2012: At the first Republican presidential debate in Florida, Newt Gingrich was asked an obvious question, right up front, by CNN moderator John King, about whether he had asked his second wife if she would agree to an “open marriage,” all the while he was having an adulterous six-year affair with his current wife, Callista. “Would you like to respond to that,” King asked.

“No, but I will,” Gingrich began. “I think the destructive, vicious, negative nature of much of the news media makes it harder to govern this country, harder to attract decent people to run for public office. And I am appalled that you would begin a presidential debate on a topic like that.”

Gingrich was rewarded with a standing ovation from the audience for his attack on the moderator as well as the media. Buoyed by the energy of the applause, Gingrich pressed to continue: “My two daughters wrote the head of ABC [which was about to run the interview with his former wife, Marianne] and made the point that it was wrong, that they should pull it, and I am, frankly astounded that CNN would take trash like that and use it to open a presidential debate… I’m tired of the elite media protecting Barack Obama by attacking Republicans.” Later, Gingrich said to Anderson Cooper, also of CNN, that “I thought John [King] did a great job” as moderator.

From Wallace to Gingrich, attacking the messenger is more the norm as a standard debating technique than it is the exception. What sets them apart, though, is their manipulation and use of sympathetic audiences to their political advantage. They share another common characteristic as well: They are both Alpha-male demagogues who win over audiences by playing the toughest guys on the set. The ferocity of their attacks, by comparison, makes Spiro T. Agnew’s alliterative characterization of the media as “nattering nabobs of negativism” seem downright bland, if not amusing. The words “nattering” and “nabobs” no doubt sent many of Agnew’s sympathizers (and members of the media) scrambling for dictionaries, a distraction that is unnecessary with the incendiary language of Wallace and Gingrich.

At a subsequent debate, NBC imposed a no-applause rule on the audience. Brian Williams, the moderator, instructed the audience of 500 to withhold their applause until commercial breaks. Gingrich was incensed, stating that if networks continued the no-applause rule he would consider not participating in future debates. “The highest, the most intense passion in both debates was a head-on collision about what the news media was doing,” Gingrich said. He added: “I wish in retrospect I’d protested when Brian Williams took them out of it because I think it’s wrong. And I think he took them out of it because the media is terrified that the audience is going to side with the candidates against the media which is what they’ve done in every debate.”

What’s going on here, what sets Wallace, and now Gingrich, apart from conventional candidates, is not just the ordinary attempt to score a debating point here or there or to convince listeners and viewers of the correctness of a proposition or program. What Wallace did, and Gingrich does, with calculated precision is an attempt to harness the audience into a campaign workforce and to ride the emotional wave of energy and applause into a positive force of their own and to project it on the television audience. They try, in short, to make the audience a part of their campaign which translates on televisions sets across the nation as a burst of support. To conservatives, attacks on the media are like a slab of raw beef.

Gingrich concedes that it was the debates and his attacks on the media that won him the primary election in South Carolina where Mitt Romney was favored. And it is the series of debates—along with Mitt Romney’s ill-timed release of his tax returns and the role of Super PACs—that had sent him soaring in the polls in Florida until Gingrich collapsed in the final Florida debate under a re-programmed Romney’s blistering attacks.

This year’s GOP presidential primary is the most debate-driven ever. There have been 19 so far, with no end in sight. Debates are a source of free advertising and exposure. They reach millions of viewers in a single bracket of time and open a window on candidates’ minds (for whatever that’s worth.) No candidate could afford to buy the exposure that a single debate provides. The length of campaigns, even losing ones, is no longer decided by candidates and their advisers as long as debates offer a glimmer of hope and anonymous Super PACs with equally hidden motives keep campaigns alive. For example: Sheldon Adelson, the Las Vegas casino magnate, worth $23 billion, and his wife have made two $5 million contributions to Gingrich’s Super PAC, Winning Our Future. The infusion of those millions has allowed Gingrich to not only sustain his candidacy but to match spending with multi-millionaire Romney, who has a Super PAC of his own funded largely by Wall Street and his former partners at Bain Capital.

Debates are hard to win and easy to lose. Debates and Super PACs have both become shadow campaigns that have effectively interposed themselves between the voters and the candidates. In previous election years, for example, voters in Iowa and New Hampshire would have winnowed the candidates down to one or two. Instead, despite a hefty campaign fund, it was poor showings in the debates that dispatched Rick Perry. And it could be argued, conversely, that the debates are keeping Rick Santorum’s back-of-the-pack candidacy alive, although poorly funded and limping. And that hapless old coot, Ron Paul, has nothing to do but stay in the race and argue for hard currency and isolationism. The debates have caused the constant shifting of the number one and two spots on the GOP list of candidates, with three different candidates each winning one of three primaries.

In the final Florida debate, CNN allowed unlimited applause at any point in the verbal crossfire. Gingrich could not resist the roar of the crowd and the aroma of pancake makeup. He showed up. But he couldn’t restrain one final jab at the press by including the media as a participant in what he described as “the war on Christianity.” He made no mention of serial adulterers who debase Christianity by violating the Seventh Commandment of God and the beatitudes of Christ.