Newt Gingrich will not lead the Republican party back to glory. 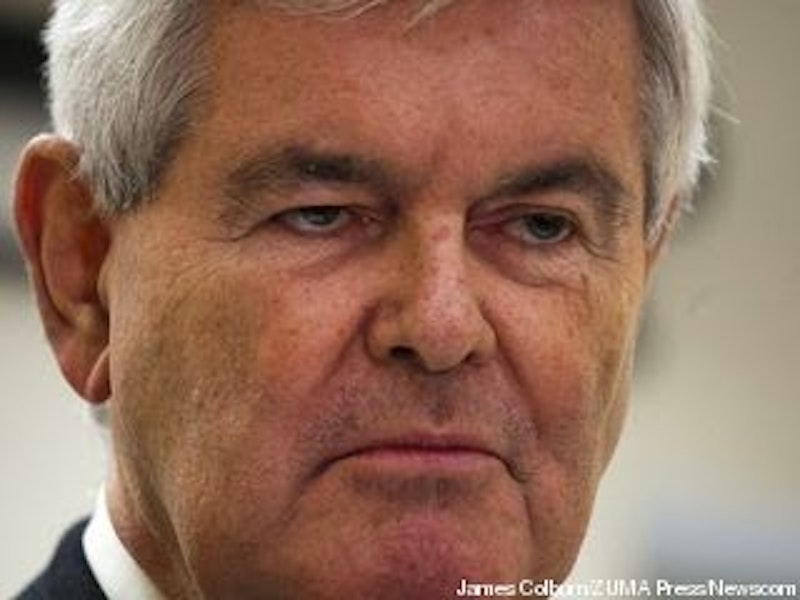 Andrew Sullivan has recently positioned himself as Obama-media-supporter-in-chief. In that capacity, he responded to the South Carolina primary results with a cheery cackle of schadenfreude.

Let us now play the tiniest violin for what is called the "Republican Establishment". I'm not sure what this phrase means or represents any more - the Chamber of Commerce? John Boehner? The Bush family? But the concept of a responsible, sane, pragmatic party leadership able to corral or coax or manage a party's base is, it seems to me, a preposterous fiction on its face, as we are seeing.

Sullivan goes on to say, " This now is the party of Palin and Gingrich, animated primarily by hatred of elites, angry at the new shape and color of America, befuddled by a suddenly more complicated world, and dedicated primarily to emotion rather than reason." He concludes in a trumpet-call to battle:

Obama is a poultice. He brings poison to the surface. Where, with any luck, it dies.

I get where Sullivan is coming from. There's a lot of pleasure in watching the oleaginous Romney try to retain his impassive, smiling mask while the demons he and his kind have unleashed methodically stuff every one of his multi-million dollars up his minutely-calibrated asshole. Ailes and Limbaugh have unshackled the dogs of ignorant demagoguery on behalf of our financial overlords, and are now having to face the facts that the dogs wants the demagoguery and don't care a whole hell of a lot about the financial overlords. Thus, Newt Gingrich, a man who is indifferent to the color of the bile so long as he's the one who gets to vomit it.

There's a real joy to watching the other fellow reap the whirlwind. But I presume Sullivan is also pleased at the extent to which a Gingrich campaign will be — shall we say —  clarifying for the left. Glenn Greenwald and his fellow travelers (like me) may natter on and on about how Obama's civil liberties record is dreadful, or whine about his spineless genuflection to Wall Street in the wake of the financial crisis. We may threaten to embrace Ron Paul out of spite and despair, and we may even mean it.

But while Obama may be disappointing, Gingrich is terrifying. As Sullivan says, Newt's appeal, his whole persona, is hate. He's all about assuring the not-very-well-off that their troubles are caused by the even less well off; immigrants, food-stamp recipients, even those damn 12 year olds who won't just go out and get a job, damn it.  Everything about him screams "fascist" — not Hitler, or anything, but one of the lesser, venal dictators, like Mussolini or Franco. He projects strength by preying on the weak. If he's the nominee, I'll donate money to Obama. I'll even vote for Obama rather than for a third-party candidate, despite the fact that I'm in Illinois and my vote doesn't matter, just because I want to be down as being against Gingrich. He's as repulsive a Presidential nominee as I think I have ever seen — and I loathed George W. Bush.

So, if you like Obama and hate the Republicans, Gingrich seems perfect. The GOP stabs itself through its fat dragon's heart, possibly losing the House and the Senate, Obama's liberal critics rally round. Happy ending. What's not to like?

Obviously, the main thing not to like is that Gingrich might possibly win, which would (I think Sullivan would agree) be really quite bad. But even beyond that, I worry that Sullivan's wrong that drawing the poison to the surface will be cathartic and cleansing.  Sullivan's hoping that if the Republican establishment just loses control completely, if the nominee is just sufficiently insane and gets beaten sufficiently badly, then — then – at last, the true, rational Thatcherite conservatism of Sullivan's dreams will return, and we shall all be saved.

I don't think it works that way — or at least, that's not the only way things can work. Choosing a leader has consequences. Before George W. Bush, I'm pretty sure most Republicans would have said that torture was wrong.  But Bush and Cheney told them it was the right thing to do…and now the Republican party is defined in part by its enthusiasm for "enhanced interrogation."

Obviously, if Gingrich loses he won't be in a position to have as much of an impact as Bush did. But I think there's little doubt that any campaign he ran would be ugly, divisive, and quite possibly borderline racist. How many times will he say "food-stamp president," and how many repetitions will it take before some significant portion of the Republican electorate decides that food stamps — or any help for people in poverty — is a bad idea? What sort of nonsensical lies will he blather about health care, and how many of them will enter the Republican id for the long term?

I'm a lot closer to being an honest-to-God Commie than Sullivan is, but still, there's something uncomfortably Marxist in cheering because the oncoming disaster will produce its dialectical utopian opposite. That line of thinking has less to do with how history actually works than with our love of revenge narratives and purifying violence. In general, though, things don't get worse to get better; they get worse to get worse. If the GOP is to become less insane, it needs to do it by becoming less insane, not by becoming even nuttier.  In the short term, or the long, whether he succeeds or whether he fails, Newt is not going to be good for America.