Second debates tend to go to the president, not the challenger. Last night Mitt Romney made sure of it. 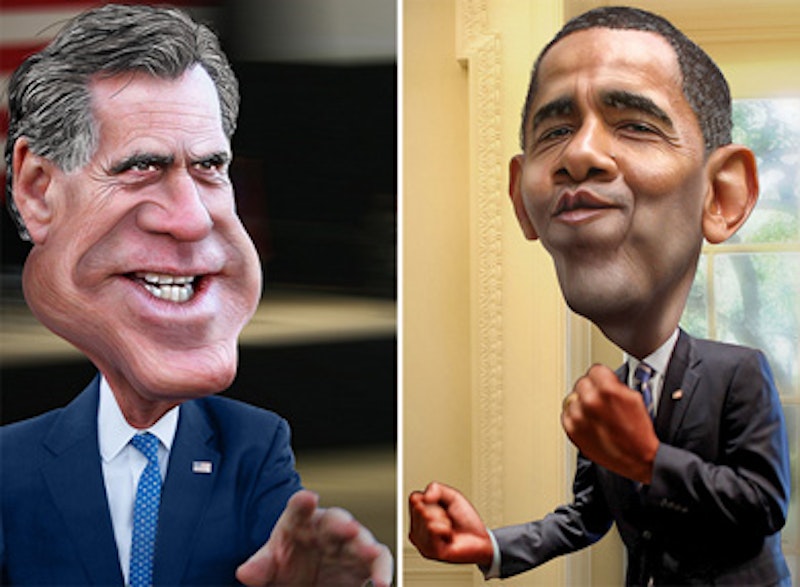 I wonder if Kerry Ladka is pissed. No one answered his question. It was pretty good: “The State Department refused extra security for our embassy in Benghazi, Libya... Who was it that denied enhanced security and why?” But Ladka was taking part in last night's presidential debate, so he was out of luck: no follow-up questions from audience members. All he could do was hand up a topic: Libya. President Obama talked about what he did the day Benghazi happened. Mitt Romney talked about what Obama did the day after Benghazi, and then Obama talked about that too. Nothing to do with Ladka's question. Too bad, but we were dealing with a pageant, not a fact-finding exercise.

Last night's pageant came out pretty well for Obama, a fact that leaves me feeling relieved but also silly. Three times now a president has been whacked about in a first debate and then gathered himself to come back in the second. Reagan vs. Mondale, Bush vs. Kerry, now Obama vs. Romney: president down in round one, up again and charging in round two. By 2020 this pattern will be conventional wisdom, the way people used to say that any nominee who had lost the New Hampshire primary would then lose in November. But last night the pattern was still a surprise. When it turned out Obama can talk after all, I felt like an airplane had righted itself.

The debate's Libya section will be the highlight. For half an hour or so, the two men had been getting off their stools, edging about, getting back on. Each guy was looking for a chance to crowd the other so decisively that the audience could see an alpha male standing tall. Obama backed down a couple of times, smiling humorously. But Romney's voice and eyes sometimes fell into that odd flicker they do: his voice breaking up like static and his eyes blinking fast but also staring. And he got pissy and contentious about speaking time.

Then Kerry Ladka asked his question. We never did find out why the security request was turned down. But the two candidates had a workout at moment generation. One moment after the other. As it turns out, Obama's activities on the day after Benghazi included vowing vengeance in the Rose Garden, and a few days later he greeted the coffins as they arrived from Libya. He sounded angry when he talked about this, and because of that he sounded like a president talking about what he had witnessed, not like a candidate trying out a line.

It was a commander-in-chief moment. During the Republican debates last fall and winter, the candidates kept jostling each other for moments like that. “That's not what a commander-in-chief does,” one would say to the other, trying to turn him into a stooge and climb atop his head so as to look taller. When Libya came up last night, the actual president saw his chance. “While we were still dealing with our diplomats being threatened,” he said, “Governor Romney put out a press release, trying to make political points, and that’s not how a commander-in-chief operates.” True, but last night Romney was determined to top himself. He was going to reenact his schmuckiness over Libya by turning it into a live television event viewed by scores of millions of people.

The back-and-forth about Obama's September 12 activities began because Romney had to take a shot: “The president, the day after that [the Benghazi attack] happened, flies to Las Vegas for a political fund-raiser, then the next day to Colorado for another event, other political event.” The Las Vegas fund-raiser! That's petty stuff, a Fox chyron. Romney stooped for this pebble and chucked it at the President's head during discussion of a crisis. Then he suggested, without making a case for it, that maybe the administration had been “misleading” the public about the Benghazi attack because of the claims that the attack was a riot inspired by the video that caused the riot in Cairo. Soon Obama was righteously firing back, a president aggrieved by a political faultfinder.

Sit down, Perry Mason. Romney attempted a Perry Mason moment a little later on. He pointed to Obama's mention just then of having called the Benghazi attack an “act of terror.” Romney: “I— I think it's interesting the president just said something which—which is that on the day after the attack he went into the Rose Garden and said that this was an act of terror.” Romney thought he had him. As Romney explained, “I want to make sure we get that for the record because it took the president 14 days before he called the attack in Benghazi an act of terror.”

Here we see a good point being sacrificed to a good talking point. That the administration changed its story about the attack's cause really is a good point. But it's just a talking point to argue that the administration took 14 days before it said anything about terrorism. Like many talking points, this one crystallizes an issue without being quite true. As soon emerged after Romney forced the matter. “Get the transcript,” the president said, and soon the moderator was stammering out the undeniable but not crucial fact that in his Rose Garden remarks on September 12 the president did indeed refer to “acts of terror” and how they would not break the nation's will. Which meant that he was calling the Benghazi attack an act of terror—or, hey, a terrorist act. “Can you say that a little louder, Candy?” a pleased president called to the moderator.

The moderator did go on to confirm Romney's larger point: “It did as well take—it did as well take two weeks or so for the whole idea of there being a riot out there about this tape to come out.” (By “come out,” she meant to be removed from administration discourse.) But Romney had made his larger point into an afterthought. He thought he'd caught the president in a lie on the spot and he dived for it, which resulted in his nose scraping the floor. If he read the liberal blogs, he'd know about the mention of “acts of terror” in the Rose Garden remarks. Romney believed his own shoddy talking point and he paid the price.

The old Romney. His outbreaks of flickering weren't extreme or chronic, and his squawking never reached the intensity that Rick Perry inspired, but at times it did seem like the top of Romney's head might not be fitting properly. Obama, when not performing as he should, seems like a badly designed wind-up doll (way too tall) that's falling in on itself because nobody has bothered to turn the key. There was a lot of that in the first debate. Romney's appearance when malfunctioning is different and more disturbing. He comes off like a man who's terrified of snakes and who just now is being confronted with a snake, but who cannot tell anybody about his phobia and instead must pretend that everything is all right. It's agonizing to watch, and he had some moments like that last night.

He had them because of a deeper fact about his soul. Kerry Ladka never found out about the reasoning behind not giving the embassy more security funds. But maybe the pageant told us something after all. Romney is a cheap little shmuck, and last night he made his schmuckiness into a pageant event just so nobody could miss it.