Is it necessarily all that desirable a thing to have a president with a vision? 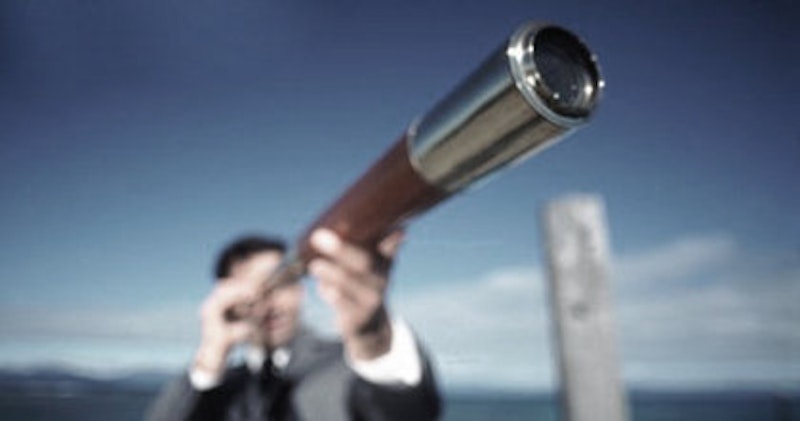 As the election has tightened, Democrats have gotten to do that thing that had heretofore been the provenance of Republicans and offer their candidate sober and helpful suggestions on how to improve his performance.

One theme that's been bruited about fairly regularly is the idea that President Obama has failed to inspire not because the economy is mediocre, nor because he spent his presidency cravenly kowtowing to the financial elites who wrecked it, but rather because he lacks "vision." Ezra Klein provides a succinct elucidation of the brief:

At this point, Romney and Obama are running almost perfectly opposite campaigns. Romney can tell you exactly what he wants to do, but barely a word about how he’ll do it. Obama can’t describe what he wants to achieve, but he can tell you everything about how he’ll get it done. It’s a campaign without real policies against a campaign lacking a clear vision. For Obama, this is a striking change. His 2008 campaign was all bold vision and grand plans. He wanted to change Washington and pass a universal health-care plan by the end of his first term. He pushed a cap-and-trade plan to slow carbon emissions and promised immigration reform, an end to the war in Iraq and a post-partisan era that would both reignite citizen control over government and make them proud of the results.

Klein goes on to argue that Obama achieved a good portion of his vision, including health care reform and an end of the war in Iraq. He also says that Obama does have a vision: he still wants campaign finance reform, a climate change initiative, and immigration reform. But, Klein says, Obama now knows how hard it is to achieve anything in Washington, and is afraid to overpromise. As a result, Obama is eschewing what could be a "great campaign" and running away from the inspiring rhetoric that could sweep him into the White House for a second term.

I'm a liberal, and not immune to the emotional logic of Klein's argument. I'd like to see Obama get up there and take a stand on climate change, or immigration reform or announce a daring plan to feed Tim Geithner and Ben Bernanke to rabid wolverines. Back in the real world, though, doing anything about climate change or immigration is incredibly contentious, and not something that's going to win votes. Publicly and gorily executing Geithner/Bernanke and their ilk would, on the other hand, probably be quite popular, but would damage fundraising, since the rich dislike seeing their own mildly chastised, much less bloodily disemboweled. Obama avoids these policies not out of timidity, but for strategic reasons, just as Mitt Romney lies, lies, and also lies because he knows that his actual policies are unpopular and would lose him votes.

Beyond such prosaic practical concerns, though, is it necessarily all that desirable a thing to have a president with a vision? On the contrary, it seems to me that what America needs, now, more than ever, is less vision. Visions are, after all, ambitious, expansive, energizing. They lead you to go out and triumph and conquer, and to cheer loudly at the triumphing and conquering. They send you off to new, daring tasks and new daring lands. They're blueprints for bigness.

I don't really want a blueprint for bigness. On the contrary, I want my country to start shrinking. I want the rolling back of visions. Our big initiatives—the wars against terror, the wars against drugs, the wars against random Middle Eastern countries, the dumping of incredibly expensive hardware on Mars—can all just dwindle into nothing and disappear, as far as I'm concerned. Rather than some new, big regulation of the financial industry, I'd like to see a reinstatement of the old, trusty, unglamorous Glass–Steagall Act, which worked fine for six decades, until that lionized visionary dipshit Bill Clinton had a vision followed by a couple decades of bubbles and huge financial catastrophes.

Visions can get us into trouble. That's a conservative insight, and one which progressives like Klein, as well as radical creative destructionists like Romney, might meditate upon. For the rest of us, I think it's best to see the visions of our politicians not as so many calls to greatness, but as a range of more or less ominous dooms.