The Tragedy of Candy Crowley

CNN rallies to the defense of the embattled moderator. 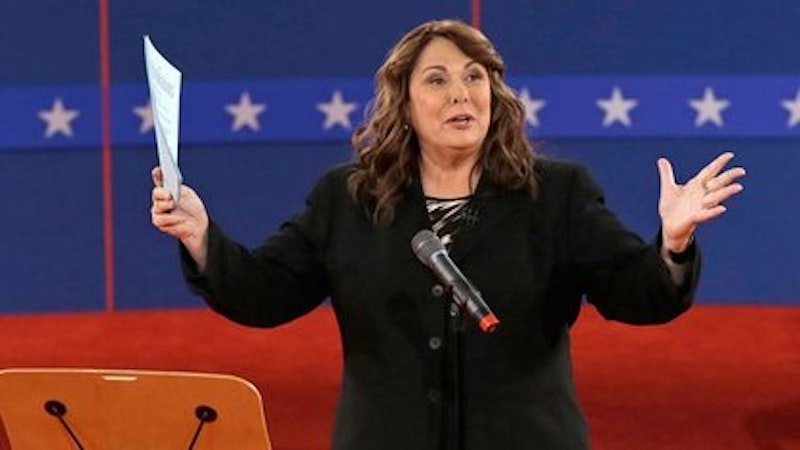 When Mitt Romney walked into his personal Benghazi disaster around 10 p.m. on Tuesday night, he also trapped the moderator, Candy Crowley of CNN. She didn't want to be there. Her voice shook; I heard it. She hurried through a sentence, unable to rest until she toppled across the finish line of total, on-the-record fairness to all parties: “He—he did call it an act of terror. It did as well take—it did as well take two weeks or so for the whole idea [of] there being a riot out there about this tape to come out. You are correct about that.” The “you” is Mitt, and by “to come out” she meant for the idea to be dropped from discussion.

CNN has come along with a memo loudly praising Crowley while pulling her back several miles from her original words. It's like she was a soldier left behind in a foxhole and they were doing an airlift. The memo argues that Crowley “was just stating a point of fact: Obama did talk about an act (or acts) of terror, no matter what you think he meant by that at the time.” No, that's not what she said. The key phrase here is “call,” as in “He—he did call it an act of terror.”

Romney started an argument about what label President Obama gave Benghazi: terrorist, not terrorist? Hadn't he called it a spontaneous demonstration? The President craftily declined to get in the weeds. He stated his position, that he had called Benghazi an act of terror, and then settled back on his stool. “Get the transcript,” he said. Romney had already gravitated to Crowley's part of the stage, or debate area, because that's where much of the audience was. When the President said, in effect, somebody settle this, she was the only somebody in view. She had to stand up and explain to the Governor how, yes, the president had indeed called it such, even though you too are correct in your own way… and so on.

Maybe Obama thought Crowley would have a transcript on hand, what with pocket devices these days. As it happened, Crowley knew the text because she had read up on Benghazi before the debate. Either way the President must have felt covered.

He knew his words: “No acts of terror will ever shake the resolve of this great nation… Today we mourn four more Americans who represent… see that justice is done for this terrible act.” That thread is pretty hard to miss. And up higher in the statement we find the President putting the original 9/11 attacks and Benghazi under the same banner, acting like they were the same thing. He describes how we “marked the solemn memory of the 9/11 attacks” on their anniversary, building up to this: “And then last night, we learned the news of this attack in Benghazi.”

No, he didn't say, “terrorists did this” or refer to “terrorist-perpetrated violence.” Obama says he didn't know for sure if terrorists were behind the attack; he was weighing intelligence. There was also the possibility that the attack was both, since terrorists can use a crowd of angry people as a screen. So Obama wrote a statement that allowed him to go in any direction at all. Terrorist, not-terrorist, semi-terrorist: Nothing was ruled out. Yet the statement makes no sense unless it's read as saying that the Benghazi attack is the same sort of thing as a terrorist attack, something that threatens us in exactly the same way and should be beaten back the same way.  Which appears to be what the president actually believes.

Did Mitt want to find something there to pin his argument on? Let him try. Obama could sit back and smile; he was reaping the rewards of being tricky enough to play things straight. But Crowley was left with nothing for cover. She had a text that made sense in only one way—Benghazi and 9/11 are the same—yet contained nothing quite like the language demanded by Romney, this “calling” business. So she quavered out her sense of the matter (“He—he did call it an act of terror”) and then discovered after the show that she was without cover. She'd been tricked by an impression. Yet lying behind the impression is a fact that shrinks down the right's whole line of argument. The president was saying Benghazi was very serious indeed. Only the right would expect him to say otherwise, and they convinced themselves that somehow, effectively, he had managed to do so. That story blew apart in Romney's face, but Crowley was there for the shrapnel.

Now the right is calling her an Obama stooge. No, she was just a prisoner of The Romney, that force for social discomfort. He had to get picky about a word, and look what grief followed. Of course, Obama left her to enjoy the hot seat. He wasn't getting off his stool; this was all Romney's show, and too bad for the moderator if it fell atop her head. So for a debate with a lot about women's importance and their struggles, there was still an absence of gentlemen. But that's politics.

Vigorous Benghazi revisionism. I used to agree that Obama had been putting out the line that Benghazi was because of the YouTube video. That was from reading headlines and seeing the quiet head-shaking displayed by liberal blogs when the matter came up. Because of Slate's Dave Weigel, I am no longer so sure. All right, I've changed my mind.

Romney was certainly expecting words about a demonstration to be in the Rose Garden statement. Romney (eyebrows up): “You said in the Rose Garden the day after the attack, it was an act of terror. It was not a spontaneous demonstration, is that what you’re saying?” But the words are not there. Instead there are three sentences to the effect that offensive religious speech is no excuse for violence. If people pissed off by the video were the chief cause of the attack, Obama was covered. Even if they weren't, he was covered. Because imagine if he hadn't included that language—the people on Fox & Friends would have fallen off their sofa.

Weigel points to remarks made on Sept. 16 by Susan Rice, the United Nations ambassador. The right considers these to be Exhibit A in the case that Obama's people were pushing the story about the YouTube video. But here's what she said:

“We believe that folks in Benghazi, a small number of people came to the embassy to—or to the consulate, rather, to replicate the sort of challenge that was posed in Cairo. And then as that unfolded, it seems to have been hijacked, let us say, by some individual clusters of extremists who came with heavier weapons, weapons that as you know in—in the wake of the revolution in Libya are—are quite common and accessible. And it then evolved from there.”

To throw this at her you have to be very certain that “extremists” cannot mean “terrorists,” that it can only mean “guys pissed off enough to riot about a video.” To me it looks like an umbrella word, one that takes in both and can be used for either depending on context. The context here is that Rice, Obama and the rest of the administration were still figuring out the matter. As Rice explained in her next breath, “We'll wait to see exactly what the investigation finally confirms, but that's the best information we have at present.”

To the right this was a line. To Obama's people it was simply giving the state of play. The right should have listened, because on Tuesday night it tripped itself and landed hard.