Why the Undecided Voters Don't Matter

The measure of who’s “undecided” is inaccurate. 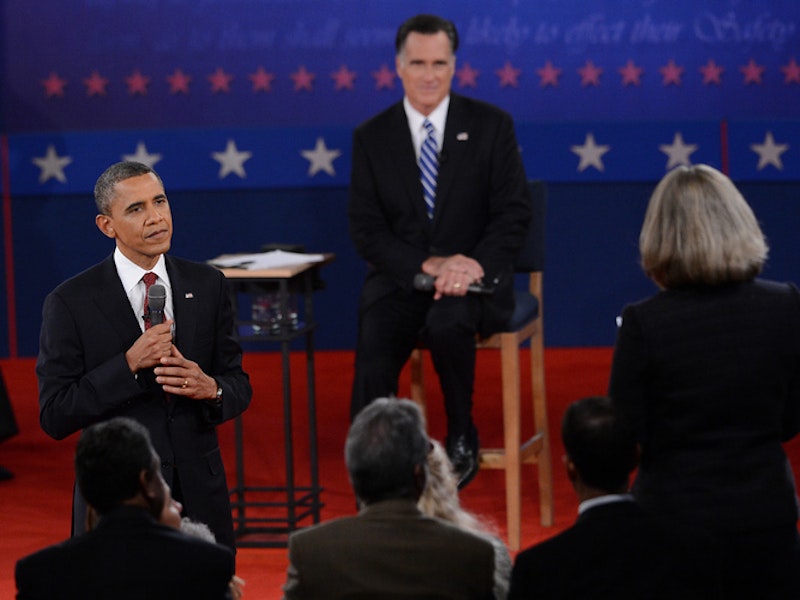 I recently realized with a bit of a start that I’m that fabled fetish to which, every four years, the punditocracy reflexively genuflects. I’m an undecided voter!

Undecided voters are variously portrayed as judicious moderates uncorrupted by partisanship, or else as drooling ignoramuses operating with so little information that they barely know what the president is, much less who is occupying the office. Either way, the assumption is that undecided voters have not made up their minds because they are disconnected from politics—either through virtue or stupidity.

This stereotype is inaccurate. My indecision has nothing to do with being disconnected from politics. On the contrary, as I do every four years, I'm following the presidential campaign with something close to obsession. And I have very strong opinions about the candidates. I loathe Mitt Romney, and think he’d be an awful president. And while I personally rather like Barack Obama, his failure to hold Wall Street accountable, and his warmongering drone strikes, should disqualify him from a second term. I am undecided, then, in that I don't like either of my options—and am trying to figure out whether I should pull the lever for Obama as a way of voting against Romney, or should instead opt for Gary Johnson as a way of voting against Obama.

I don't know whether my indecision necessarily reflects the indecision of other undecided voters. But John Sides at the Monkey Cage suggests that at least in some respects I'm not that unusual. Most undecided voters, Sides argues, "are mostly composed of partisans" (his italics). Most identify as Democrat or Republican rather than as independents. And most have political opinions.

If undecided voters are neither apolitical nor uninformed, and if they are likely to have strong political opinions, then the next question is, are these undecided voters actually more persuadable than any other voters?  My own experience suggests that the answer is mixed. I was sort of persuaded to maybe vote for Johnson by Conor Friedersdorf's excellent essay about Obama's failures. But my willingness to consider Johnson is really only due to the fact that I live in Illinois, a state that is more likely to slide into the Pacific Ocean than to vote for Romney. Surely undecided voters in other non-swing states are also in part motivated by the fact that they know their votes don't matter. And undecided voters in swing states probably have a pretty good sense of what they plan to do on election day, whether that means voting for Democrat, Republican, Independent, or not voting at all.

There are only a small number of undecided voters anyway, and if many of them aren't especially persuadable, that presents a puzzle. If there's hardly anyone to persuade, why did you get measurable swings in the polls after the Democratic convention, or after Romney won the first debate?

Nate Silver has an interesting answer to that question (http://fivethirtyeight.blogs.nytimes.com/2012/10/17/oct-16-can-polls-exaggerate-bounces/). He argues that campaign events affect, not people's presidential choices, but rather their likelihood of responding to polls. Poll response rates are extremely low—five-10 percent at best, Silver says. If something happens which inspires one side (for instance, if Romney wins a debate), his partisans may feel more excited about their candidate, and so may be more willing to talk to pollsters. That can have an appreciable effect on poll results, but it doesn't mean that anyone's mind has been changed.

If this is true, Silver concludes, it's quite possible that all the bouncing around in the polls we've seen over the last couple of months is more or less irrelevant. Obama started the campaign with a narrow lead (around two percent, Silver thinks), and he's likely to finish up with a narrow lead. The poll swings don't show that undecided voters are a fickle and untrustworthy lot. They just show that people are more likely to answer a poll when they're happy than when they aren't.

This isn't to say that campaigns don't matter. Obviously ads can convince some people, whether putatively "undecided" or not. And events on the trail can rally enthusiasm or dampen it. The poll numbers themselves can have a major effect; if Obama had retained his lead through that first debate, Romney donors might’ve started to pull out, which could have been devastating.

The point is that the campaign is often presented as an exercise in convincing a handful of undecided voters to change allegiance. And that's not necessarily a very helpful or accurate way of viewing the race. The truth is that most people, undecided or otherwise, have a pretty good idea at this point what they're going to do on Election Day. The news media focuses on undecided voters because doing so makes the horse race look more exciting. But that doesn't mean that they're really all that important.