Obama, It's Time To Get Fierce

Lessons for debate no. 2 and beyond. 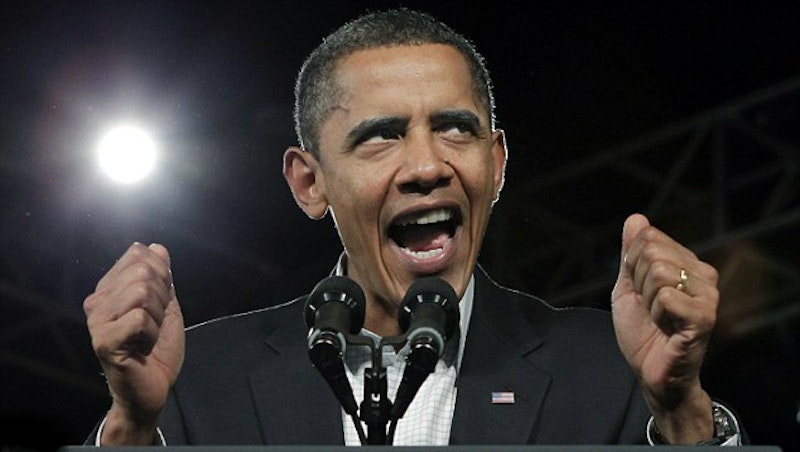 I knew that President Obama’s performance in the first debate was dismal when the ordinarily boom-voiced Ed Schultz, host of MSNBC’s The Ed Schultz Show, didn’t shout once during the network’s entire post-debate recap. The President did so badly he was uniformly (if prematurely) panned in virtually every media outlet. He’s been mocked on Saturday Night Live and satirized on the cover of The New Yorker. Cool as he is, the President even made fun of himself. But let’s move on. With the polls tightening and the second debate tonight, it’s more crucial than ever for Obama to snatch the momentum from Mitt Romney’s sails. It’s time for Obama to get fierce.

“Fierceness” is a colloquial term that captures the camp and glitter of over-the-top fabulousness. Historically, marginalized groups have used fierceness to gain respect and notoriety from within their social worlds. To be fierce in the competitive space of voguing and house ball culture, where the term largely originates, you have to work to have the best dances moves or the most inspired look. The lesson for the rest of us is that fierceness is a powerful tool we can use to direct our own success.

There are three steps to becoming fierce. First, identify a goal or an ambition you want to accomplish. Sounds easy enough. But second, you must dare to attract enough attention to yourself to get your foot in the door, a tactical maneuver meant to draw attention away from your competitors. This is much easier said than done because as you inch towards your dreams, you frequently battle others with the same aspirations. Finally, you need to back up the spectacle with substance, knowledge, and expertise that can only be obtained after a great deal of practice.

In her heyday, Tina Turner could walk on stage and control the audience. As a performer, Turner was all about motion: the dresses moved, the hair flew, and the hips didn’t lie. But underneath all the dazzle was a boisterous voice and a virtuosic talent. Turner conveyed confidence, not haughtiness, talent, not emptiness.

But fierceness is more than entertainment. The late Ted Kennedy was one of the fiercest politicians of the 20th century. He was experienced, direct, and welcomed a fight. In the 1994 Massachusetts Senate debate between Romney and Kennedy, a clip we saw at the Democratic National Convention in August, the Senator dominated Romney by getting straight to the point at every answer. When asked about abortion, Romney claimed to support a woman’s right to choose, but Kennedy blew a hole in Romney’s reply. He called him out as “multiple choice,” not pro-choice. Next to Kennedy’s decades of expertise, the lack of substance in Romney’s rhetoric was obvious.

And rhetoric is key. If we look at a sampling of the adjectives used to describe Obama’s debate performance, the results highlight the power and magic of fierceness: Obama was “lackluster,” “listless,” “helpless,” “empty,” “vacant,” “inept,” “passive,” and “distracted.” How can you be successful, or hold anyone’s attention, if you can’t wow? Romney, who had much more to lose and much more to prove, was “strong,” “self-assured,” “spirited,” “battering,” “fiery,” “aggressive,” and like a “bull to a matador.” In other words, he was pretty fierce.

Or was he? The paradox of fierceness is that when it’s too aggressive, too haughty, it can actually turn people away. In America, we love success, but nobody likes a bully. Fierceness presents a delicate balance between compassion and confidence, attitude and approachability, and between substance and style.

The polls have shifted in Romney’s favor since the first debate, but his performance was ultimately a failure. He was spirited, flamboyant, and full of swagger, but he only reached the second stage of fierceness—drawing attention to himself. His foot was through the door, but he can’t stop it from slamming shut. Unlike Tina Turner or Ted Kennedy, who are celebrated for their fierceness, Romney doesn’t have the substance to back his act up. And without substance, it’s not fierce, and it won’t lead to success.

Moving forward, not back, Obama must channel true fierceness on the campaign trail and in the remaining debates to win the election. Prior presidential candidates, such as John Kerry, Al Gore, and even George H.W. Bush, faltered in the face of attacks, relying on steady rhetoric when they should have been fierce. That’s why in tonight’s debate Obama must speak with power, directness, and conviction. We shouldn’t even notice that there are two people on stage. He must be charming and confident, fiery but not abrasive.