Morgan Freeman To The Rescue

On a new advertisement for Barack Obama’s re-election campaign. 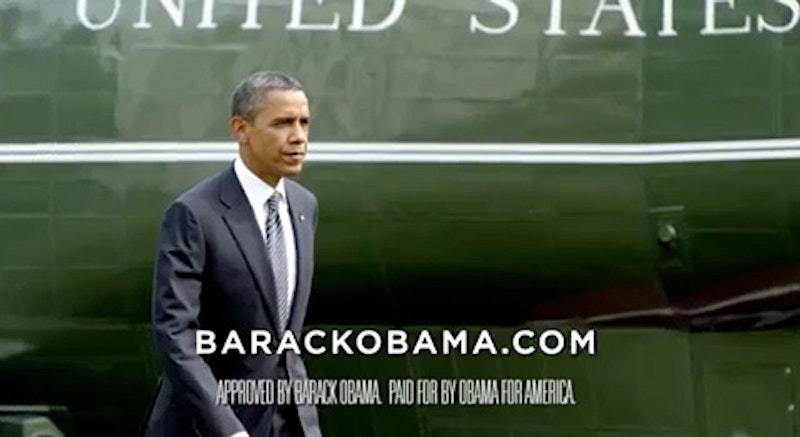 It was a pretty good call, if you think about it: a sedate, “stay classy, Chicago” rejoinder to the Nevada nuclear-stockpile sized mountain of corporate cash blown on negative political ads this year by the two major political parties, arriving as the campaign enters its final days. “Challenges” is, of all things, calming, in the way settling in to watch Masterpiece Theatre with a large glass of Merlot in hand is: no rhetoric, no hyperbole, no scrolling text, no short-thrift lifts from archival/surreptitiously captured footage of the enemy, no accusatory talking heads. No moving anything, to be honest. The pitch is built on that filmic device wherein directors slow pan while seemingly within the frames of iconic/bucolic still photographs, and there are some gorgeous, effective fades on offer.

The spot looks professional and expensive, but its strength, effectiveness, and power lies in its quiet simplicity, because this is a political ad for people who are sick of chaos, people who probably just spent an entire day looking at computer screens and fending off churlish co-workers. Dinner’s over, they’re maybe trying to relax a little. Get the kids washed up. Knock off a couple household chores, write out some bills, scan the day’s homework assignments. These people are tired.

Morgan Freeman never sounds tired, he never sounds old, and he never sounds wounded; Morgan Freeman sounds eternal. There’s a reassuring gravitas to his rumbling, ponderous baritone that capable of selling everything from VISA to the Olympics to images of rampaging penguins. His utility right now is a no-brainer, like enlisting Tom Brady to help pimp the new Dodge Dart to a new generation. In “Challenges,” Freeman is handed the unenviable task of selling a whitewash/imaginary of the Obama administration’s record, as scripted by the best operatives donated cash can buy, in 32 narcotic seconds. Obama has probably said the stuff Freeman says in this commercial a million times in the past couple months, in little towns and college towns and in huge arenas and in fundraisers, and the effect, via television news, is such that even if one is inclined to vote for the man, listening to him saying these things is wearing.

So the decision to hand off the narration was the right one. (We can argue later about whether James Earl Jones would have been a better choice.) I give Freeman a solid B, maybe a B+, on his salesmanship; he somehow manages to imbue boilerplate with brio, to make meat and potatoes stump-speech cheese seem almost inspiring while pretending as though he isn’t even narrating an advertisement that’s part of an epically bitter, divisive election campaign. Why, one could almost forget that the collective product he’s endorsing dropped the ball on a great many important political issues. So lulling is his tone that on might put to the side the fact that this product has a depressing record on gun control and has made itself something of a poster child for methodically drone-assassinating a chilling number of people overseas. The many positives one could point to—the Lily Ledbetter Act, the end of “don’t act, don’t tell,” Obamacare, saving the auto industry and rescuing the economy at large—are glanced over or barely gestured at as images parade proudly by, aimed at some mythical heartland of undecided voters and disenfranchised, disengaged 2008 Obama supporters.

In any event, “Meditative steel” is a good look at the moment, and—optimistically, sure—could help set the tenor for the next few weeks, even as the birther blather continues unhindered, the racist emails fly, and Mitt Romney’s penchant for waffling hits new heights of incredulity. For these are truly sobering times; in less fraught times, this, “Challenges” seems to say, is what the political process might aspire to. Your move, Fred Thompson.