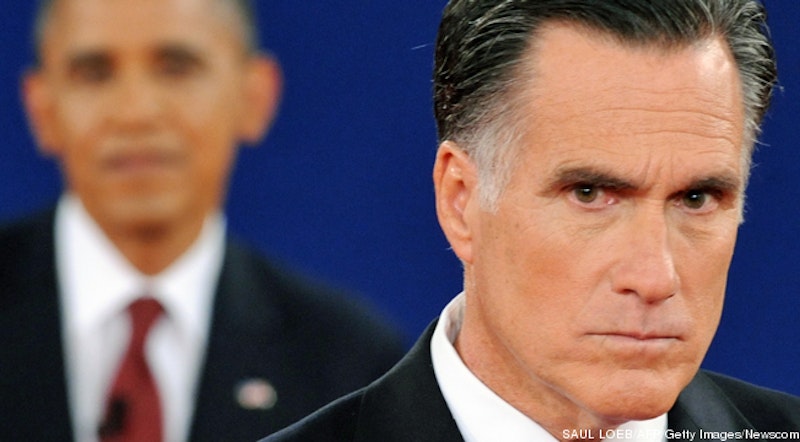 One of the presidential candidates isn’t being honest with us, so says the mystery October Surprise website, set to reveal what look to be some of Romney’s tax returns at 5:30 p.m. on October 22. As if that would be surprising at all. We’ve all seen his bogus tax plan, and we’ve witnessed his unending stream of PR pratfalls and unfortunate public statements. You can’t help but think of him as a man who wouldn’t bleed if he got stabbed. Chalk it up to Romney being an insulated, over-rich and oblivious buffoon, just like everyone else. Let’s consider another possibility: the Republican candidate for president is a hardcore meth monster, and he’s getting worse and worse at hiding it.

Romney and the GOP exhibit all the classic signs of a speed freak deep in the throes of psychosis: delusions, disconnection from reality, lack of empathy/warmth towards other humans, relentless energy, a fungible sense of the truth, and a craven self-interest that eliminates any sort of love or appreciation of others. Observe how much this campaign has aged Mitt Romney’s face. Notice how hyped up and tweaked out he was during both debates, hammering and interrupting Obama and poor Jim Lehrer in the first and refusing to sit down or still in the second. And take a moment to consider how rapidly his policy fluctuations are occurring these days, as we near the finish line—in the same day, Mitt claimed he would “create 12 million new jobs,” which he followed up later on with, “The government doesn’t create jobs.” Someone hasn’t been sleeping or eating enough.

The Romney campaign’s official position has always been that Mitt doesn’t drink alcohol or caffeine, has never smoked, done hard or soft drugs, and goes to bed each night with a cookie and a glass of milk. Even admitting that he tasted beer once as “a wayward teenager” went down the media’s gullet without even a sideways look. Let’s be real though, dude has to be hitting the crank hard. He lies constantly, who’s to say his abstinence story isn’t just more malarkey? Obama copping to blowing coke and chiefing spliffs in college makes it seem like his drug days are behind him, except maybe a casual Xanax or Valium every now and then, for example when he has to debate a psychotic speed freak on national TV. At least Obama appears to use responsibly. Romney’s short term memory is out the window, even stacked against his persona six months ago; his face has only two expressions: eager surprise and a wistful longing that suggests he pines for the days when he wasn’t prisoner to a horrid chemical dependency. It’s amazing that his teeth haven’t rotted out yet, although this could suggest a penchant for straight up daily IV pumps of methamphetamine, Third Reich style. Romney hasn’t quite “solved” the problem of people without money demanding shelter, food, and medical supplies, but could his radical tax plan, brazen distortions of the truth, and upward redistribution of wealth suggest it’s at least in the cards? All I’m saying is, it’s not a coincidence that Salt Lake City is a fountain of glass. How else could a man run for president for five consecutive years, all the while fumbling his beliefs like a stoned quarterback and retaining a single principle – to become the most powerful man in the world. It’s all there on a silver platter for everyone to see – as a wise woman once said, “Just study it out. Study it out.