New documentary, Get Me Roger Stone, details decades of influence. 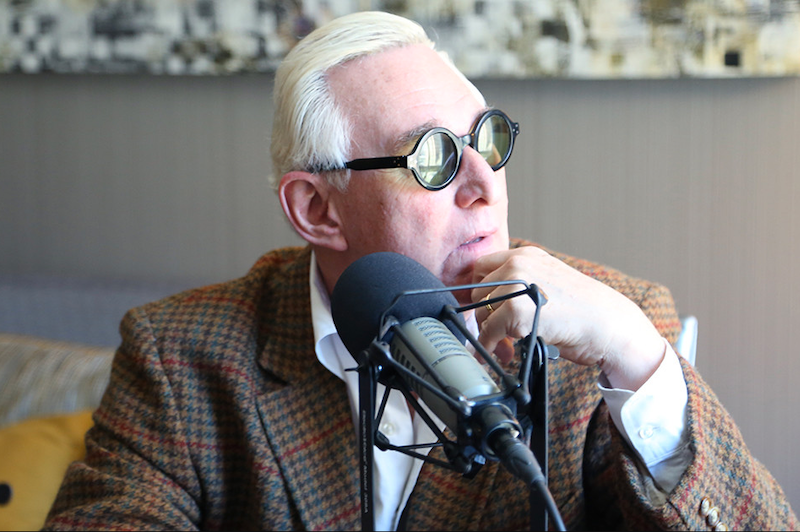 “Politics ain't beanbags and losers don't legislate.” Political operative/strategist and Donald Trump confidante Roger Stone has a set of pragmatic political truths he calls “Stone’s Rules,” and this one’s at the top of the list. A master of the political “dark arts,” Stone is, according to Jeffrey Toobin, the guy who’s shown up at every key moment in recent American history. “The sinister Forrest Gump of American politics,” is what Toobin calls him.

The new Netflix documentary, Get Me Roger Stone (co-directed by Dylan Bank, Daniel DiMauro, and Morgan Pehme), places the dirty trickster on the scene during the Nixon years, shows a clip of him chatting with Ronald Reagan when he'd joined that team, and demonstrates how his fingerprints were all over the successful Trump presidential campaign. Stone is the main narrator of this cinematic tour through his political career, joined by journalists like New Yorker writers Toobin and Jane Mayer, the late Wayne Barrett, and Fox News anchor Tucker Carlson.

Carlson says that Stone understands democracy like few covering politics do, pointing out that he was able to look at Trump, long before anyone else, and see him as someone the voters might like. He just had to hang in there long enough for his guy to go along with the plan at a time when the electorate was restless for a radical departure from politics as usual. “A prime piece of political horse flesh” is how Stone describes Trump in this film. Stone's the jockey.

Stone tells a story that began with his political epiphany at the age of 12, when he read Barry Goldwater's The Conscience of a Conservative. He talks on camera about his first political dirty trick as a 19-year-old prodigy brought on board by the Republican Party, his key role in the development of the Super PAC concept, and the evolution of his philosophy of politics, which is, essentially, “Winning is all the matters.” Toobin, Mayer, and Barrett offer counter-narratives, but they don't attempt to deny his gifts and the influence he's long exerted.

The filmmakers throw a curveball at all the hate-watchers by filming inside of Stone’s Florida home, where he lives with his three dogs, three cats, wife, and 91-year-old mother. The scenes of him joking with the aging, wheelchair-bound matriarch (“They're liberal filmmakers. They can't be trusted.”) and kissing his ailing little dog offer up a human side of the “sleazeball political operative” that would’ve had many looking for the fast forward button had they lasted any longer, meaning they might have missed his wife's priceless comment that she thought he looked like “a Nazi Hitler youth” the first time she met him.

Carlson, in his intro to the film’s segment on the Stone sex scandal, tells the viewers that the strategist could’ve been even more successful if he hadn't self-sabotaged. While advising presidential candidate Bob Dole in 1996, The National Enquirer broke the story of Stone’s visits to sex clubs with his wife, and their advertisements for sex partners in swinger publications. Even advisers to politicians aren't allowed certain lifestyles in the U.S. The lurid publicity forced Stone to operate from the shadows, a place that turned out to be more suitable to his nature.

Forced to go rogue, Stone seemingly unshackled himself from the few qualms he may have once have had about acting purely on Machiavellian principles. This film portrays his style as a 180-degree departure from “Good guy Eisenhower earnestness.” Stone explains the motivations behind this and why he chose to become a pioneer in the concept of negative political advertising: “Hate is more powerful than love.”

Get Me Roger Stone demonstrates what the combination of few ethical scruples and a fertile imagination can produce. Stone's name was linked to the forged documents that got Dan Rather fired, the dubious tape that had Michelle Obama saying “whitey,” rumors of Ted Cruz’s marital infidelities during the 2016 primary, and Obama’s “Manchurian” candidacy. Stone claimed that a hooker he met in a sex club told him about his nemesis Eliot Spitzer’s encounters with other working girls, a scandal that forced him from his job as New York’s governor in 2008.

The smarter journalists keep a safe distance from Roger Stone, aware that his considerable charm is capable of distorting their reporting. Still, it's hard to resist calling the consultant for a quote, because he rarely fails to yield a gem. Any Democrats considering themselves part of the Resistance or planning to participate in the elections in 2018 and 2020 are remiss if they don't watch this well-crafted film about taking the “low road” in politics.