This House-Sized Walking Fart of a President

A few words of appreciation. 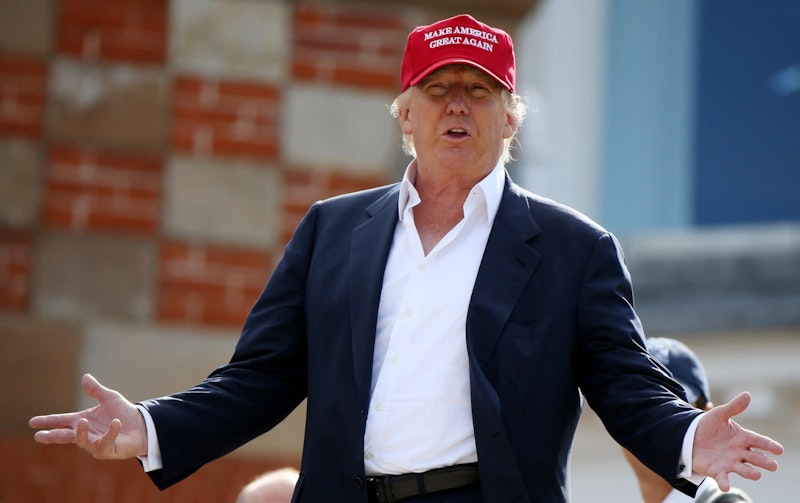 Thank you, Donald Trump. Because of the Comey affair, my personal little world has been saved in two ways. First, I was right about you, and I’ve been right for 22 months in a row. You’re all dictator, down to the toes. You want to take over, and the reason is that you’re a greedy slob. Second, I was wrong to be scared of you. In addition to being a proto-dictator, you’re a moron. When you bring stupidity, it’s like a weather pattern. So much stupidity crowds overhead that people hunch. The upside, for us, is that this stupidity guides you. You have nothing else.

When you want to pull a slick move, for example, you might tell your trusted vice president and attorney general to leave the room, your reason being you had words too hot for them to hear. Then you’d tell the something hot to the remaining man in the room, this man being the only one of the three to be of undeclared loyalty. Then you’d fire this man. Then he’d produce a memo. Now prosecutors are being hired by the federal government to nail you and Russia. The person hiring them used to work for the man you fired; in fact, though it’s a while back, he once sent federal agents to help his old boss some stand off some pushy officials from the Bush White House. This fellow now gets federal money and a permanent job chasing your hide. Trump, you performed magic.

Political scientists told Vox that modern-day dictators don’t start with a plan. All they have is an inclination. Let’s say (all right, I’m saying this, and I don’t mean the wrongdoers have to be men) that the dictators-to-be want to manspread their political comfort. They don’t have a big idea that calls for the system to start over. They just think the system should give, that it shouldn’t pinch them. Judges and the press shouldn’t nibble at them. Unfriendly election districts shouldn’t clutter the prospect. The dictator-to-be encounters snags and setbacks, and responds by whacking the corners of one institution or rule or another, depending on circumstances. The fellow feels entitled, and (I add this thought) he came to power because of a fucked-out public, one that isn’t going to push back where it counts. He wouldn’t be in power unless a sizable part of the population had given up on political responsibility. After all they took a look at Mr. Voracious and figured what the hell. Why not let him shake the government and see what happens?

Now he’ll get his way. He’ll push here and shove there, and jostle the necessary people into line. Unless he figures the way to do this is to incriminate himself in front of his top law-enforcement official and then fire the guy. Unless he’s of that bent. Then he runs into problems and they’re a whole second weather pattern, one as big as his stupidity.

Did Trump know he was incriminating himself? It’s possible he didn’t guess how his words added up. Nobody told him that this stuff—the boss saying, hey, stop that investigation, all right?—was that thing, the obstruction, what people talk about. But why did he tell Sessions and Pence to leave the room? Because Trump, master negotiator, make-out king, was going to level Comey. In the bare ring made of two men facing each other, Trump would peel back the self-assurance of his interlocutor; the man’s primal stuff would be open to the air.

The charm and intimidation were going to break him down. Witnesses couldn’t be present for this leveling: they’d hinder the victim in giving way. Thus, the door. Sessions tried to linger. No, he must leave.

Now the Master could go to work. He did so. But the room didn’t tilt. Really, the guy just looked at him. A little later the guy wrote a memo, and now there’s all this. The guy’s friend hiring prosecutors, and he can keep hunting you as long as he feels like.

You slob. You pussy grabber. You maroon. You child. Thank you. Yes, Trump, you. You vomitous and engulfing mouth. America was sick to elect you, you permanent malfunction. But because you’re a malfunction, you’re going to lose. You got started already. Thank you.