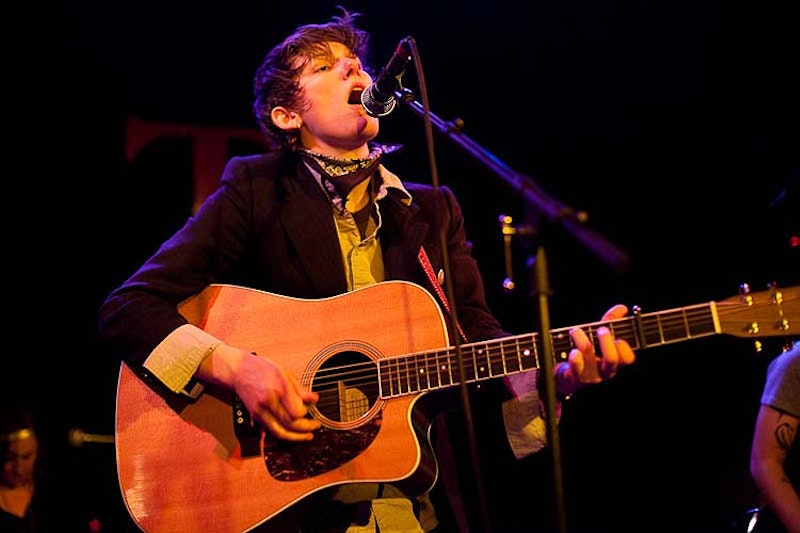 I recently saw a show by Chris Pureka, a genderqueer, pescatarian folk singer. I’m a fan of Pureka’s music. I also wanted to remind myself that, as a journalist, even a conservative one, I should frequently get out in the world and experience life exclusive of Fox News, Internet outrage, and talk radio rants.

Seeing a genderqueer folk singer was a nice escape from the conservative death spiral. The conservative death spiral is when right-wing pundits, in a desire to draw an audience, ratchet up anger and outrage to the point where, like a drug addict whose body is breaking down, they’re getting less high even though they are shooting up more. Many right-wingers in the media have stopped even trying to do any kind of journalism. They’re in the business of making horror movies, and the left is the boogey man.

Bill Kristol described the conservative death spiral in a recent podcast. Kristol speculated that supporting Trump and blasting the left has translated into higher ratings, often at the expense of honor and integrity. “This is a peculiarity with the conservative, right-wing media,” Kristol said. “There’s a certain reward for becoming more strident, more bitter in your attacks on the left, whipping people up more… I think ultimately it limits you and ultimately it even can also lead to a death spiral, the kind that we see with some of the conservative talk show hosts. You have to get more and more radical. People say, this isn’t what I like listening to, I used to learn something. Just like drugs, you get short term boost, but long term its bad for you.”

As an example, Kristol cited Tucker Carlson—who started his career writing for Kristol’s own Weekly Standard. Said Kristol, “To see him on Fox—I don’t really watch him much, but still—beating up some 20-year-old college liberal because he said something stupid, it’s really ridiculous.”

Politically correct idiocy on college campuses should be covered, and is fun to cover. But conservatives have developed a kind of bloodlust for this kind of thing, forgetting that there are other things going on in the world. As a conservative, I agree with most of what I see in the right-wing media. The United States is the freest and greatest country in the world. Identity politics is a bullying tactic weak people use to make themselves feel better. Taxes should be lower. Feminists are mostly angry women with issues. The media are dishonorable, duplicitous, and liberal. Socialism is nothing more than what Arthur Schlesinger called it 50 years ago—the desire to crawl back inside the womb. Evil is real.

Yet conservatives shouldn’t spend all our time hunting the left and forget that there is a world outside the Drudge Report. Liberals are wrong and the extreme left is unhinged, and it’s fun—and for some lucrative—to point that out. Yet there is pride and honor in getting out and stretching you cultural legs. I like to experience a new band or movie, or play or person that I’ve discovered, even if it’s something that wouldn’t be found within 10 miles of Sean Hannity. I once heard a professional dancer say that she occasionally still attends a beginner’s class in dance, just to make sure she has the fundamentals—“Besides,” she said, “you’d be surprised how much you can learn in a beginner’s class.” If you call yourself a journalist, you shouldn’t go from your wonky liberal blog to The Washington Post to Vox, like Ezra Klein, or conversely, from the campus conservative newspaper to Fox News, without acquiring a curiosity about the world you are living in.

So I went to see Chris Pureka at a small club in Virginia. Pureka’s music is like a mix of Woody Guthrie, the Indigo Girls, and the Cowboy Junkies. The voice is both breathy and contemplative and piercingly clear. One of my favorite songs is “Holy”: “40 years in the palm of the ocean,/You didn't win, you didn't win, I've got anchors,/Said the child in my heart, repeating./On the day that I died./To the west, to the west, I need anchors/To the west, to the west, I need strong hands,/To pull me up over the mountains/Before I love you again.”

Sitting in the dark listening to Pureka play, surrounded by about a hundred gender fluid and genderqueer people, and maybe even a few plain old homosexuals, on a clear and cool Mother’s Day no less, America didn’t seem like a place that was collapsing. It was a place that was just getting started.