Comparisons of Trump/Comey to Watergate Are Presumptuous

If there’s a scandal, it hasn’t yet unraveled. 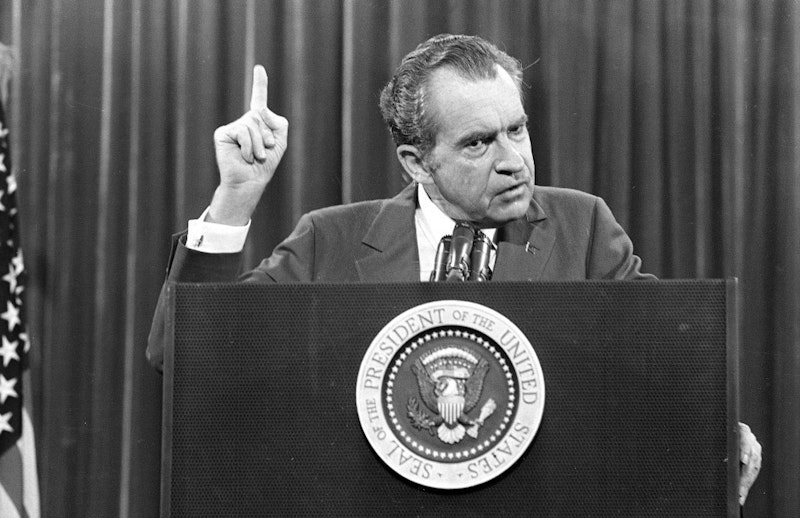 It’s emblematic of today’s debased media—on all sides of the political spectrum—that Donald Trump’s firing of James Comey, and his bizarre and shifting explanations afterwards, has pundits tripping over themselves to compare Trump’s vulnerability to Richard Nixon’s Watergate. Not a single witness has yet been called for any formal investigation on Trump’s suggested misdeeds. James Fallows wrote a piece last week for The Atlantic, headlined “Five Reasons the Comey Affair Is Worse Than Watergate,” (he probably didn’t write the headline, ceding that duty to clickbait-in-chief editor) that was notable more for its shallowness than substance. It’s extraordinarily difficult for a reader to register astonishment in a media environment when that word, used so often, like “Constitutional crisis,” is nearly meaningless, but Fallows’ analysis comes close.

Fallows, a respected liberal who was also a speechwriter for Jimmy Carter, covered Watergate as a young reporter (he’s now 67), a choice assignment for a young man who has just graduated from Harvard and Oxford. Recognizing that most Americans were born after Watergate unfolded—over a period of two years before Nixon resigned, in stark comparison to Trump’s current predicament—Fallows gives a brief primer on the multi-faceted scandal, by now a rote historical exercise.

The most accurate sentence in Fallows’ piece reads: “As with anything involving Donald Trump, we have no idea where this will lead, what is ‘true,’ and when the next bombshell will go off.” It could lead to Trump’s eventual impeachment, resignation, or, after media over-reaction, a bump in his popularity. As Fallows said, “we have no idea.” He willfully neglects the obvious: that Trump—since announcing his candidacy nearly two years ago has incredibly dodged so many bullets that would eliminate a more conventional politician—has, either strategically or through dumb luck, survived. I thought he was dead meat after his slur on captured American soldiers and vile anti-Muslim rhetoric well before the Iowa caucuses. Trump may well be loonier and more out-of-touch than Nixon, as hard as that is to imagine, but he’s not close to his “final days.”

Yet, after suggesting that the Comey business is worse than Watergate, Fallows indulges in what passes for journalism today: “[B]ased simply on what is known so far, this scandal looks worse than Watergate. Worse for and about the president. Worse for the overall national interest. Worse in what it suggests about the American democratic system’s ability to defend itself.”

What is known so far? Not much. Fallows goes on about Russian interference in last fall’s elections, which he admits is “alleged,” and says, “At worst, such efforts might actually have changed the election results.” Maybe, maybe not. But not once does Fallows write that Hillary Clinton (and her media sycophants like Paul Krugman—hell, all of The New York Times—and liberal cable TV show hosts) blamed Comey for her Electoral College loss after his strange behavior, changing his mind three times in the space of five months during the height of the election. Now, after Trump’s oddly-timed sacking of Comey, the former FBI Director is a Democratic martyr and exemplar of integrity.

Fallows is waiting for “principled” Republicans to either resign from Trump’s administration, or if in Congress, repudiate the President, citing attorney general Elliot Richardson (and his deputy William Ruckelshaus) leaving Nixon’s tent after being ordered to fire Watergate special prosecutor Archibald Cox. The difference, of course, is that when the “Saturday Night Massacre” occurred, Watergate had already been in the news every single day for eight months; Nixon’s lieutenants John Mitchell, H.R. Haldeman, and John Ehrlichman were let go; the best reality show of the 1970s, Sen. Sam Ervin’s Watergate Congressional hearings kept a nation riveted; and Vice President Spiro Agnew (on bribery revelations) had resigned.

Richardson, who had national political ambitions, saw Nixon’s upcoming downfall and made the most of it. That’s not to say he didn’t have principles, but it wasn’t an entirely selfless act.

That Trump’s in political trouble is undeniable—his unprecedented ignorance for a president and gross public branding doesn’t help—but this is still the early stages of what may or not be his comeuppance. It’s sensationalistic to already label, as Fallows does, the Comey/Flynn whirlwind of accusations as worse than Watergate.