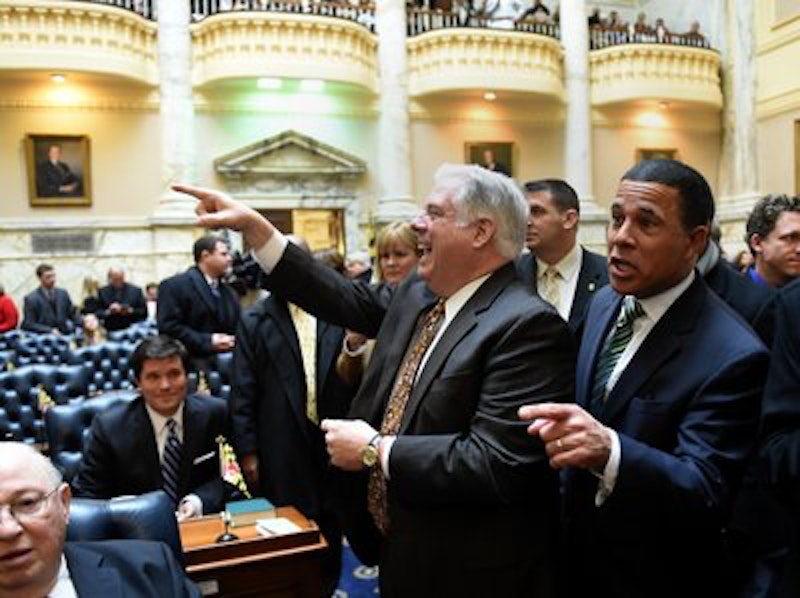 The Maryland primary election for governor is little more than a year away, even if Democrats haven’t appeared to notice months are slipping by, money is committed and drying up, the grass roots are aligning and nowhere in sight has the Party’s big-foot candidate emerged from the pack of eight (and growing) who say, in that shopworn phrase, “I’m considering running.” Go ahead, and get it out of your systems.

There was a test-drive a few weeks back by the Party’s Western Maryland branch at its annual hootenanny at Rocky Gap in Cumberland. As you’d expect, the first and second place winners were two with neighboring zip Codes, hence name recognition played a weighted influence. They were Rep. John Delaney, of Montgomery County, who represents that neck of the woods in Congress, and Kevin Kamenetz, executive of Baltimore County, whose westerly reaches are joined at the hip with Carroll and Howard Counties. That ego trip has as much meaning as a high school mock election.

Democracy in action doesn’t come cheap. A mighty effort and exhaustive time are necessary to assemble a credible campaign. Effective campaigns can’t be slapped together overnight on a whim. Money, media and organization are the three building blocks of any successful campaign, as long as one of them is money, and combined, these days, the cost in Maryland is about $20 million to do the job right.

Whoever the Democrats eventually choose in the June 26, 2018 primary will go up against the incumbent Republican governor, Larry Hogan. Hogan’s well-financed—he already has $5 million in the bank—his poll numbers are consistently high, he’s avoided the stain of President Trump, he’s made nobody really angry, he’s given Democrats much of what they wanted from the legislature and has the support of many old-guard Democrats who believe the party has moved too far to the left.

But Hogan is also open to attack from Democrats for his failure to stand up to Trump’s fiscal and policy decisions that would affect Maryland, where Democrats outnumber Republicans by more than two-one. Trump’s cuts in the education budget and his move toward a voucher system, cuts to National Institutes of Health budget, down-the-line cuts to federal agency and installation budgets, cuts to Planned Parenthood, for example, all have serious implications for the state’s economy and its workforce. And his punishing policies toward immigrants, especially Muslims, have embittered the state’s large immigrant population.

Hogan may have another major soft spot, too. He defeated Lt. Gov. Anthony Brown in 2014 when Brown made a poor showing in the primary election which he won but was a tip-off that he was vulnerable in his home county of Prince George's and in neighboring Montgomery—the two most populous counties in Maryland that anchor I-95, the backbone of Maryland’s Democratic party’s base. In the general that year, many Democrats chose Hogan over Brown, who carried the curse of the lieutenant governorship (none has even won for governor) as well as his own perceived inadequacies. (In recovery, Brown was elected to Congress last year.)

The question about Hogan is whether he can retain that Democratic support or lose it back to Democrats if they advance an acceptable candidate. In 2014, Gansler ran second to Brown after a series of personal mishaps, and Heather Mizeur, a delegate almost unknown outside her home county of Montgomery, ran a surprisingly close third to Gansler. Mizeur campaigned as an openly gay candidate but with a cohesive and well thought-out platform that far surpassed that of any other candidate. This year, Madaleno is the gay candidate who is the established expert on state finance and policy.

But being Democrats, there has to be a scheming marplot somewhere in the ranks. And he happens to be Del. David Moon, of Montgomery County (where else?). As reported in The Washington Post, Moon is circulating a petition asking fellow Democrats to withhold their endorsements of candidates until next spring to avoid the appearance of playing favorites, as the Democratic National Committee did with Hillary Clinton last year. A resident of Takoma Park, Moon is a protégé of Rep. Jamie Raskin (D-8th), who signed the petition and for whom Moon used to work.

From the same political left flank as Moon, a group of progressive Democrats, a local spin-off of Sen. Bernie Sanders’ Democracy for America, is prepared to commit its 26,000 Maryland members to work for Jealous when and if he becomes a candidate. Jealous endorsed and campaigned across the country for Sanders last year in his impressive run against Clinton. And Sanders isn’t even a bona fide Democrat. Jealous’ calling card? A $15 minimum wage. So, as irony would have it, even Moon’s fellow travelers aren’t paying attention to his cause. Or is Moon acting on Jealous’ behalf? (Moon’s website characterizes him as a “progressive,” suggesting that he is a disappointed Sanders supporter.)

Money and endorsements follow winners. Moon’s petition resembles a gag order, kind of like having and election without a candidate. It also violates a basic motivation in politics—self-interest. Try selling the loopy petition idea to candidates who have body clocks of their own. The petition would stifle dissent and debate and practically hand reelection to Hogan by limiting fundraising and organization. It is an established practice in politics to get ahead early by “maxing out” contributors and nailing down support to drive off the competition. The amounts that individuals and businesses can contribute over an election cycle are capped, and the trick is to get it and leave nothing on the table for opponents.

To illustrate the competition for campaign dollars and the premium on vacuuming contributions early, Kamenetz recently held a fundraiser with a price tag of $1000 a ticket. And candidates for City Council, whose next election is in 2020, are already raising funds either for their next outing or to pay off past campaign expenses. Local elections put additional strain on how much state candidates can collect from the usual sources.

Here again, in Moon’s petition idea, is an example where purity of the process appears more important than winning the governorship. Politics by prescription doesn’t necessarily work. And delaying endorsements and support until next spring’s thaw is just plain nuts.

Moon’s paper blockade would intrude on candidates’ right to develop strategies and run their campaigns as they see fit, within the law, of course. But it also encourages creative opportunities to subvert the law to seek the advantage while others are abiding, or simply aren’t looking. Even worse, applying the petition would blunt citizen engagement.

Primary elections, and the commotion leading up to them, are all about organization. They are family affairs wherein party members squabble and fight it out and hopefully choose the candidate who best represents what the party stands for going into the general election. God is on the side of the candidate with the best get-out-the-vote operation. General elections are about issues and personalities.

Taking the politics out of politics isn’t a winning formula. It’s a prescription for disaster. And the party of the people shouldn’t become the party of the petition, a paper wall that blocks voters out of the primary process and turns it over to party mandarins. This is a time, after all, when leadership and issues are originating on the streets and town halls across the country and not in the marble palaces of power where elected representatives timorously sense their directions from legions of angry demonstrators, and not the other way around. Moon’s impractical, if not impossible, petition is one more degree of separation between voters and elected officials.