Lazy, irresponsible journalism at its worst. 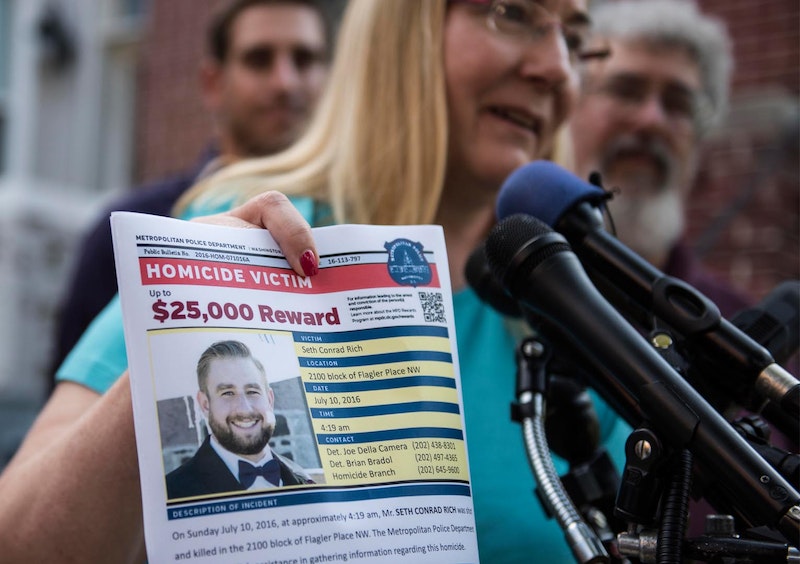 It was the other 2016 conspiracy theory involving DC, the Clintons, the DNC, and leaks: The idea that Seth Rich, a 27-year-old DNC staffer who was shot and killed one night last July, was in fact murdered, either to cover up some nefarious deed, or as retribution for Rich supposedly serving as the source for WikiLeaks’ publication of hacked DNC emails.

While not as over-the-top ridiculous as Pizzagate—the conspiracy theory that hinged on such ridiculous leaps as “pizza” being code for “little boy”—the Rich-was-murdered-by-Hillary hypothesis never made a lot of sense. The DC police, while they never solved the murder, made clear all along that it was probably a botched robbery, as is normally the case when one is shot and killed at four in the morning in DC.

The DNC leak, according to virtually all intelligence estimates, was the work of a notorious hacker, Guccifer 2.0, and not an internal leaker. Every conspiracy theory over the years about the Clintons having people killed, from Vince Foster on down, has fallen apart under scrutiny. And all that aside, knowing what you do about the 2016 Clinton campaign and the Debbie Wasserman-Schultz-era DNC, do they strike you as the type of people competent enough to carry out a perfect murder and get away with it?

But on Monday, Fox 5, a 21st Century Fox owned-and-operated local TV station in DC decided to go Full Alex Jones and report an alleged breakthrough in the Rich case. The headline? “Family’s Private Investigator: There Is Evidence Seth Rich Had Contact With Wikileaks Prior to Death.” (Full disclosure—I worked for a short time at a Fox TV station, although not the one in DC; the station where I worked tended to devote much greater resources to dog-rescue stories than to high-level murder conspiracies.)

The report—later picked up by Fox News—is a complete embarrassment, which doesn’t come close to making the case that it says it does. And it’s also totally irresponsible. The source for the story is Rod Wheeler, a private investigator who, according to the story, was hired by Rich’s family, implying that he is acting on the family’s behalf. Wheeler, citing other sources, claims there is “tangible evidence on Rich's laptop that confirms he was communicating with WikiLeaks prior to his death.” Wheeler also claims that the Metro PD “has been told to stand down” on the investigation.

Fox News, looking for something, anything, to cover instead of the latest Trump/Russia brouhaha, gave the story huge play. A follow-up story, on Fox News proper, cited a law enforcement source who claimed to have seen an FBI forensic report claiming Rich had contacts with Wikileaks.

Sounds pretty damning, right? Not really. First, the story includes not a lick evidence—no documents, none of these supposedly damning emails. Just two people claiming to have read documents that they’re not able to produce. It’s all second- and third-hand stuff. And even if Rich had been in contact with WikiLeaks, there remains not a shred of more than circumstantial evidence that doing so had anything to do with his death.

When you’re going on air and implying that a murder plot reached high up into the Democratic Party, you’ve got to do better than that. The MPD has denied it, Rich’s family has distanced themselves, and subsequent reporting by NBC News knocked down virtually every key assertion in the story.

Then there’s Wheeler, a questionable figure. Wheeler is a former DC detective and sometime Fox News “contributor”—he’s the guy they would sometimes bring on to talk about racially charged crime stories when Mark Fuhrman wasn't available. If you know his name, it may be from the time, 10 years ago, when he went on Bill O’Reilly’s show and claimed (falsely) that “lesbian gangs” were running rampant all over the country, and “recruiting” young children.

In fact, Rich’s family stated that Wheeler’s services were “offered to the Rich family and paid for by a third party,” and that Wheeler was contractually barred from speaking to the press about the matter.

Furthering the shadiness, the third party was later identified in the NBC News story as another Fox News (and Breitbart) contributor, Ed Butowsky. None of this was disclosed at any point in Fox 5 or Fox News’ reporting.

And finally, the notion that cops engaged in a massive cover-up of evidence that was damning to Hillary Clinton is just plain laughable. Did you pay any attention to the nationwide voting patterns of police officers in the 2016 election? And if it were true, wouldn’t an investigation that led to the downfall of a major figure be good for the careers of the cops involved?

So someone with a clear interest in discrediting Clinton and/or the DNC spent money to use the grief of the Rich family in order to advance a dodgy conspiracy theory. Shame on Fox 5 and Fox News Channel for going along with it.

If these emails exist, then that should be a news story. But a couple of people, one of them anonymous, and another with no credibility, saying they saw emails that they can’t produce, shouldn’t be. This was a wildly irresponsible story to air, even if it didn’t imply that the most recent Democratic nominee for president is a murderer.

This is shoddy journalism, probably the most indefensible report by a local news station since KSTP alleged that Minneapolis Mayor Betsy Hodges was making gang signs. It’s a disgusting exploitation of a grieving family in order to further a highly dubious conspiracy theory.