Roger Ailes and the Garter Belts

Guy’s a perv, is what I’m hearing. 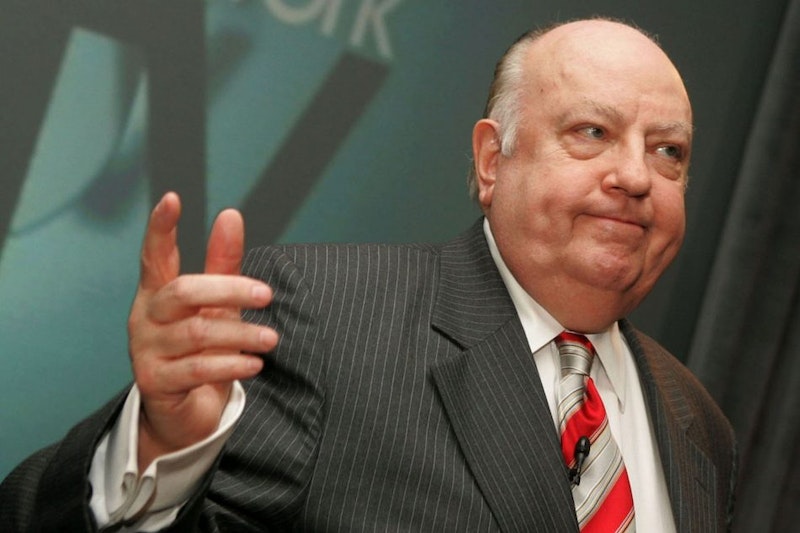 “One time he asked me if I was wearing underwear, and was he going to see anything ‘good,’” says a woman who used to work at Fox News. She’s talking about Roger Ailes, the man who runs the place. We don’t have the woman’s name, but The New York Times mentioned a relevant point: “His sets are famous for their translucent desks, which show the legs of his female stars who are so often in skirts.” I detect a theme.

“I got a call directly from Roger asking me to come down and to make sure I wore a garter belt and stockings,” says another woman. Her name is Marsha Callahan and she’s recalling a time in 1967 or 1968 when she was a model who might get on the show Ailes produced. “And then,” she says, “I recall very clearly, he said he’d put me on the show but I needed to go to bed with him. I was a really shy girl, but I was a little cheeky so I said, ‘Oh yeah, you and who else?’ And he said, ‘Only me and a few of my select friends.’”

Another former model, this one unnamed, recalls the early 1980s. Her agent wanted to get her into broadcasting, and she had an appointment with Ailes. He had her read from a script for a food show. “Then he locked the door and said he didn’t want any interruptions,” she says. After that, “something sexual took place, but I blocked it out of my mind.” But it did involve this: “He pulled out a garter belt and stockings and told me to put them on.”

Another theme is girl pooling. Marsha Callahan mentioned Ailes’ alleged remark about sharing her with friends. A decade later we have this from an unnamed woman who interviewed with Ailes in 1975: “his message was, If you want to make it in New York City in the TV business, you’re going to have to fuck me, and you’re going to do that with anyone I tell you to.” And a woman named Kellie Boyle remembers Ailes giving her a talk in 1989 about what she had to do for him. “He said that’s how all these men in media and politics work—everyone’s got their friend,” she recalls. “I said, ‘Would I have to be friends with anybody else?’ And he said, ‘Well you might have to give a blowjob every once in a while.’”

We have most of these accounts because the lawyer for Gretchen Carlson, who’s suing Ailes for sexual harassment, dumped them in the lap of New York magazine. The suit was filed last Wednesday, and Carlson’s lawyer reported the same day that it had caused a series of women, “maybe around 10 women,” to contact the law firm with their own stories of Ailes’ piggishness. As of Saturday, when New York posted its article on the women, the magazine put the number at “more than a dozen.” Six of the women—Marsha Callahan, Kellie Boyle and four who held back their names—agreed to interviews for the article. These women allege piggish doings by Ailes. The three quoted by The Daily Beast allege piggish remarks on his part.

Line up all the stories, and assume they’re true, and a progression comes out. Ailes the young producer ripped off opportunities where he could, which was in the office and with the doors closed. Ailes the fully mature macher stuck to saying smutty things while at the workplace, but he used his power to knuckle women into ongoing arrangements. The models who used to show up at his TV show had to provide genital action for a gig. Later, the female political operatives and producers who caught his eye were told they had to cooperate if they wanted a career. His targets were people who had no bargaining chips but good looks: models needing work, then rookies looking for a break, now a TV personality who has aged out of the audience’s preference range.

Are the stories true? I’d say trust the garter belts.