White Guilt Preaching to the Choir

Processing your white guilt on social media is self-serving and insulting. 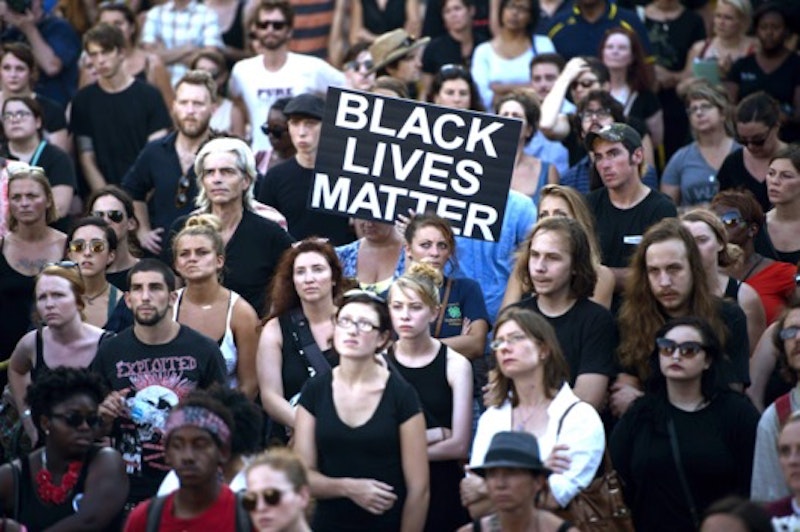 There’s not much else to say about last week’s violence, but too many white people can’t help but weigh in to make sure all of their friends and followers know how sad and not racist they are. I’ve lost count of the statuses I’ve skimmed that start with something along the lines of “I know it’s not my place, but…” and “I’m not very good at articulating, but…” Well, don’t then! Why has white guilt been so inflamed by the killings of Alton Sterling and Philando Castile? Nothing has changed since Ferguson—black people are still targeted and killed by police across the country. It hasn’t abated, and it didn’t start in August 2014—all Ferguson did was illuminate a lot of previously oblivious white people to a dynamic that’s existed since the 18th century. And it’s not as if these murders became any less visible, hundreds of people have become hashtags in the past two years, but the eerie coincidence of Sterling and Castile killed on camera within 24 hours kicked an already steady activist obligation into overdrive. Outrage is everywhere, and it should be—the country is rotting from the inside out. But the amount of people working through their white guilt publicly on Facebook and Twitter is just disgusting, an empty and cynical act coming from a self-serving impulse to be “one of the good ones.” White saviors appear everywhere on offer, but no one needs your apologies. Shut up for once and do your part anonymously: donate to a victim’s family, pay attention to local elections, go to a protest and listen.

You can’t escape it. One of the most recent comments on the GoFundMe page I linked to above reads: “As a white person, I'm seeking ways to end racism in America.” Bottle that up and deal with it! If you’re living in America, there’s no escaping the fact that we benefit from centuries of genocide and slavery. This country is kept afloat by Native American blood and black bodies. If that hasn’t hit you yet, you’re just not paying attention. While it may be well-intentioned, and occasionally articulate, this sudden rush of white people writing paragraphs of apologies and self-absorbed babble online is irritating and, I can only imagine, insulting and silly to people of color. These days, nothing is ever good enough—you’re either mansplaining, whitesplaining, not intersectional enough, or too heteronormative. Liberal-minded people are eating their own while people like Rudy Giuliani and the Lieutenant Governor of Texas say that Black Lives Matter are full of hypocrites who haven’t saved any black lives. “The police are the ones saving black lives!” Giuliani is a hack whose only shining moment was his handling of 9/11, remarkable grace for such a schmuck. We know who the goblins are. We know that #BlueLivesMatter is an idiotic false equivalency—blue is not a skin color, it’s a uniform that you can take off. Being a cop is voluntary—you can’t choose your skin color and its accompanying social condition.

Social media slacktivism has mostly been a mild irritant up until this point, but it’s gotten worse and worse since 2014. I can’t think of anything more pathetic and useless than processing your white guilt on Facebook. How lost up your own ass do you have to be to post some rambling apology about being white (or, even worse, apologizing to “black America” on behalf on whiteness). Maybe our muscles are just fresh from reacting to Orlando, and we have to move some words around on the boilerplate. Replace LGBT rights with racism and Islamic terrorism with police brutality. Done and done! Give money, sign petitions, write your representatives. Just shut the fuck up!