Libertarian Gary Johnson is 2016’s “What If” Candidate

In a strange election year, it’s at least plausible Johnson/Weld might matter. 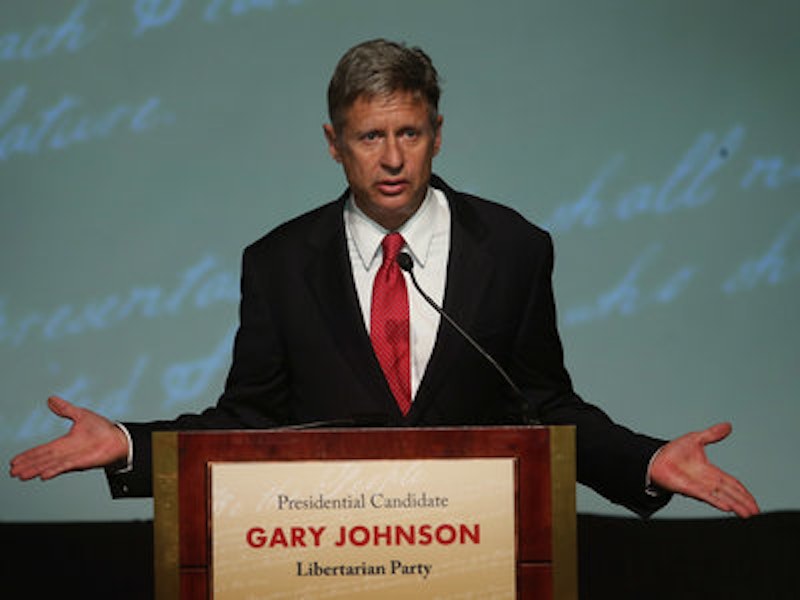 Gary Johnson is 2016’s “What if” candidate. What if Johnson becomes this season’s Ross Perot or Ralph Nader? What if voters are so turned off by both Hillary Clinton and Donald Trump that Johnson breaks through as a third party winner? What if all those Bernie Sanders supporters remain resentful of Clinton and defect to Johnson instead of aligning with the Democrat? What if Johnson was better-known and taken more seriously?

At long last, Johnson may get some breakout notice, if not universal recognition, on his second quixotic try for the presidency as a Libertarian. Not so much for anything he’s said or done lately but because the alternatives are, frankly, less than compelling as future commanders-in-chief. The prime time choices are, for anyone who hadn’t noticed, between a xenophobe and another prissy doyenne who plays fast and loose with mobile devices let alone imagine what her thumbs could do riffling across the nuclear codes.

So what if Johnson emerges as the default candidate in the backwash of the FBI’s searing assessment of Clinton’s character and trustworthiness and Trump’s manic ramblings and apparent inability to wrap his hoary head around a cohesive message. And what if Johnson suddenly registers at the requisite minimum of 15 percent in the polls—nearly double his current showing of eight percent—to qualify for the debate stage with the two major party candidates. Suddenly the equation is expanded. Remember, in 1992, Perot peeled off 19 percent of the vote and helped make Bill Clinton president. And in 2000, Nader’s 2.74 percent of the vote as the Green party candidate, many argue, may have helped tilt the election to George W. Bush.

Johnson’s no third-party slug, though his taut government, Libertarian approach may lack universal appeal. He was a hugely popular two-term Republican governor of New Mexico (1995-2003) who cut government redundancy and payrolls, vetoed more bills than the other 49 governors combined and left state with a $1 billion surplus. Johnson has described himself, not surprisingly, as a “fiscal conservative and a social liberal,” a champion of school vouchers and public works projects who was also one of the first public officials to speak out for decriminalization and, eventually, legalization, of marijuana. For this and other calls for individual freedom he won recognition from the ACLU. In private life, Johnson, fresh out of college, started a door-to-door home repair business which he built into the largest construction company in New Mexico.

In his first campaign for president in 2012, Johnson won 0.99 percent of the vote, or 1.27 million votes, more than all the other minor candidates combined and the most votes ever captured in the many attempts by a libertarian candidate (including Charles Koch). This year Johnson chose as his running-mate another highly successful former Republican governor, William Weld of Massachusetts. Both Republicans governed effectively in Democratic states.

Libertarians are bottom-line believers in personal freedom. Who isn’t? But many, like the Koch brothers, extend the concept too far. They would take the country back to freewheeling days of the Robber Barons before Sinclair Lewis muck-raked them into regulatory compliance and Theodore Roosevelt busted their trusts.

Neither Clinton nor Trump have proved to be truly effective candidates even though they won on the mathematics of their primaries. Because of their obvious deficiencies as candidates and future leaders, many voters may feel inspired to look beyond the ritual choices of Democrat or Republican, if for no other reason than to satisfy their consciences or their antic sense of farce.

Clinton, after a year on the road, has been unable to get beyond—well—Clinton. The family’s sometimes shadowy history and her own shortcomings trail her like tin cans tied to a dog’s tail. FBI Director James Comey has intensified the travail. His 15-minute sober-sided presentation of the FBI’s non-indictment indictment of Clinton was a devastating blow to her character and judgment that will linger like a bad hangover through the November election.

House Republicans were quick to seize the moment with a pop-up Congressional committee hearing featuring Comey as the star and only witness, if only to amplify the FBI’s findings and further poke holes in Clinton’s defense. It seemed like Benghazi redux. But Comey left two important loose ends hanging in the air: Yes, he would entertain a Congressional request to investigate possible perjury charges against Clinton; and Comey declined to say whether the Clinton foundation is under investigation.

Trump, beyond description, demonstrated what a rank amateur he truly is. A businessman who boasts of his ability to spot opportunity, Trump failed to grasp the political significance of the FBI report. The issue practically landed in his lap. During an appearance on the night of the report’s release, Trump used much of his speech time ranting and raving about dictators, anti-Semitism and a long list of his usual gripes and ramblings with virtually no mention of the FBI’s report on Clinton’s mishandling of email accounts and their possible exposure to enemy hackers. Trump may think he’s bold and brash, but he has no understanding of nuance or of how to grab the golden ring when it goes by.

Meantime, Clinton tried to change the subject, a detour from her normal tactic of attempting to ignore it altogether. She offered no response or explanation to the FBI report. Instead, she used the Monopoly Board backdrop of Atlantic City to denounce Trump’s business practices and blame the decline and fall of the seaside gambling resort on the financial collapse of Trump’s casinos. The truth is, Atlantic City killed itself without Trump’s help.

So you’d think that with such pathetic performances by the major party candidates an outlier and a force of nature such as Johnson would have some appeal. But the history of third parties in America is not very encouraging. Even the Know-Nothings faded fast. For one thing, the Constitution clearly leaves the governance of elections to the states, except in cases of civil rights violations (and even the Supreme Court weakened that oversight). And the 50 states, each with their own curated variations on election laws, until recently presented a difficult challenge for third parties and their candidates to enter election competitions. Other noteworthy third-party candidates included: John B. Anderson (1980); George C. Wallace (1968); Eugene Debs (1900,1904, 1908, 1912, 1920); Theodore Roosevelt (1912); Norman Thomas (1928, 1932, 1936, 1940, 1944, 1948); Ross Perot (1992, 1996); and Pat Buchanan (2000). Surprisingly, Johnson and Weld, as the Libertarian ticket, will be on the ballots in all 50 states, a remarkable turn of events considering that the two major political parties control the states’ election machinery. And to them, candidates come in only two flavors. And one of them is not Libertarian. Nonetheless, the Johnson question lingers: What if?