Maybe we're all too heavily armed. 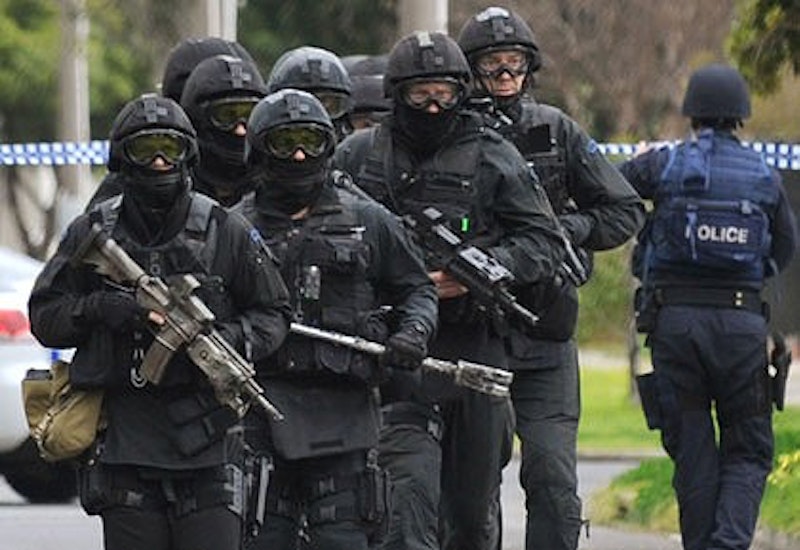 "The police were there to protect the protesters and their First-Amendment rights." Variations of that sentence have emerged from people on every part of the political spectrum after Dallas, as though they all shared a single defective brain.

Sometimes people say whatever they think it would be good for people to believe. Sometimes, when they do, they say obviously false things. That something would be nice if it were true, or that it would supposedly have good effects if everyone believed it to be true, does not show that it’s true.

The police were there to control, intimidate, and surveil the protesters, as they always are. It’s grotesquely disingenuous to say you've assigned a hundred heavily-armed officers—with armored vehicles, long guns, and God-knows-what instruments of violence hovering in the background—to protect people protesting against police violence.

If you’ve ever been to a protest, I think you understand this perfectly well. We could find kind, conciliatory things to say at a moment like this that wouldn't make it obvious that we don't give a damn about the truth.

At the upcoming conventions, police will take the time-honored approach: pen protesters in some distance from the venue; surround them with intimidating looking men and their tools of violence; monitor them and film them; and then say they're doing it for the sake of the protesters and their right of free expression. That insults the intelligence of all concerned, particularly the people saying it.

As we think about the problem of weapons in our culture, we ought to focus on the gun-show loophole, etc. We also ought to note that there are uniformed people strutting around with masks, body armor, and stun guns, and ready access to gas, concussion grenades, semi-automatic weapons, military vehicles, and—it now appears—robot bombs.

Please understand that I’m not advocating violence against the police. But if last week made anything obvious, it’s that the problem of guns and violence in our culture is not limited to lone terrorists, gang members, or psychotics. Maybe there should be Congressional sit-ins to disarm state agencies. It’s worth remembering who trained Micah Johnson in the techniques of combat.