Even on Fox & Friends, Somebody Cares About Loyalty

The man at the end of the couch speaks up. 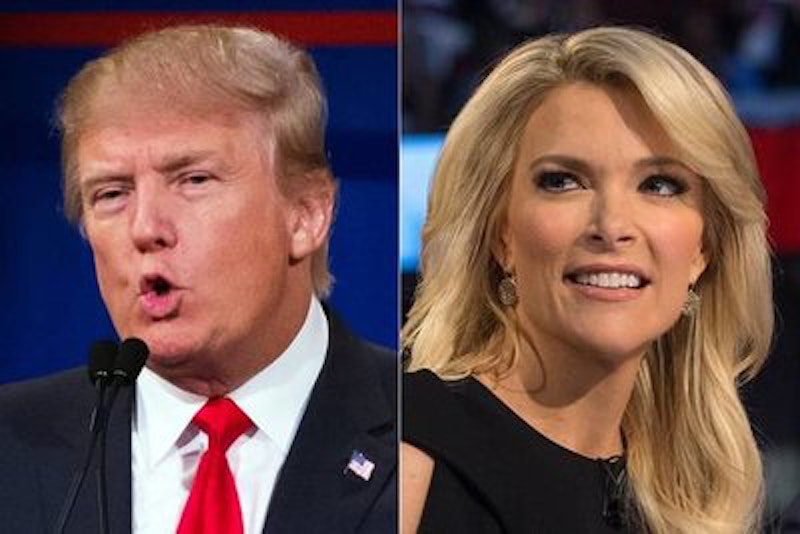 “Who do you think is right?” says Elisabeth Hasselbeck, knees together on the couch. “Donald Trump... or Jeb Bush?” She's trying to get Brian Kilmeade, one of her co-hosts, to wrap it up after his 18 seconds explaining why economic nationalism is wrong. But Kilmeade brushes past her question. “And I'll tell you one thing,” he says from his humble end of the couch, the zone where Fox & Friends keeps the co-host who talks about things like economics. “Donald Trump did something entirely out of control yesterday. He started tweeting against Megyn Kelly.”

Hasselbeck, trying to break in, says, “He did!” But Kilmeade doesn't slow down. “Totally unwarranted,” he says, and his voice is rushed, dogged, strained. “Professionally and personally. You cannot—you should not be going after her. It bothers me personally.” Hasselbeck says, “Bothers Don—.” Again, she fails. “We're all friends with Donald Trump,” Kilmeade says, “but he's totally out of bounds reigniting that fight.” His voice sounds like Steve Guttenberg pushing himself to do what's right. Hasselbeck, sitting next to Kilmeade, has her body angled a bit toward him, but her eyes look away, sometimes toward the center camera, sometimes off to the left. Steve Doocy, the lead host, develops an interest in the sheet of white paper he holds by his knee. Their jaws look tight.

“I don't know if he expects to get ratings out of that, or poll numbers, but he's not going to be successful,” Kilmeade finishes.

Kilmeade spoke for twice as long as he did about economics. Now he has a sad look on his face. His gaze goes down, toward his knee, and then he reaches forward and gives something on the coffee table a nudge. Then he straightens up and squares himself, knee on his elbow, face ready for the camera again. Doocy still holds the piece of paper by his knee, but he's looking at the camera too.

Supposedly, Fox & Friends is the show that Roger Ailes, the boss of Fox News, uses when there's some line he especially wants the public to be told. That would make sense. The program's couch jockeys don't try to be journalists, and they aren't headliners with their name in the title. They can take orders. On the other hand, Kilmeade looks like he means what he says. He seems like somebody too hurt and ticked off to care about his voice and whether it sounds strong. For their part, Doocy and Hasselbeck look like they just lived through somebody's messy moment.

Not long ago Fox & Friends rolled at Trump's feet like a dog whose stomach needs petting. He could go on the show whenever he felt like—the people were delighted. The place was his little pad in the Fox line-up. And it was nice that Trump liked the blonde and the two suits. They were his pals even though he counted and they didn't. Now this.

What happened was that Trump went back to slagging Megyn Kelly. The first time around, after the debate where she asked him all those tough questions, he spent days saying nasty things about her via Twitter and interviews. He stopped after Ailes called him up. Either Ailes promised better behavior (Trump's version) or he warned Trump “we can go to war” (the version put out by people near Ailes). But during the Trump rampage, Fox kept quiet. The channel issued a brief statement of support for all the debate moderators; staff and on-air personalities didn't speak or tweet in Kelly's behalf. She didn't speak in her defense either, except to give viewers a display of lifted chin and a crisp announcement that she would cover the news as she saw fit. In fact, Fox played it so cool that it imposed something of a news blackout: Trump's notorious “blood” comment was mentioned once by Fox and 50 times by CNN, according to Media Matters for America.

This time Fox is shooting back. The tweets by personalities began soon after Trump committed his latest blats (“Easy, Mr. Trump,” Bill Hemmer warned him) and continued the next morning and on through lunch. “This needs to stop,” “THIS needs to stop,” and “has 2 stop” were some of the thoughts. Between noon and one, Ailes put out a statement. “Donald Trump's surprise and unprovoked attack,” it said, and “couldn't be more proud of Megyn” and “Donald Trump rarely apologizes, but this time he should” and “much less allowed ourselves to be bullied.” After that even Sean Hannity tiptoed forward. (When Trump returned to Fox, his appearance on Hannity's show brought in 600,000 viewers. Normally the show gets 400,000.) “My friend @RealDonaldTrump has captured the imagination of many. Focus on Hillary, Putin, the border, jobs China & Iran,” Hannity tapped, running out of commas before he ran out of advice.

Trump was unmoved. His statement, released about 1:30, began, “I totally disagree with the Fox statement.” But the stand had been taken. Let its face be Brian Kilmeade: the man at the end of the couch spoke up for his friend.