Reason vs. Jacobin and the World 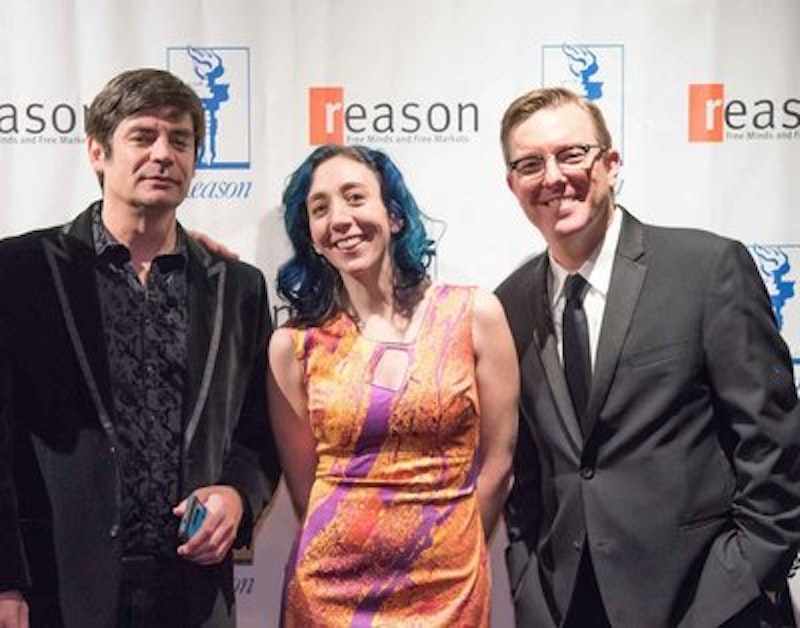 First: Taylor Swift isn’t borrowing Kayne West’s Life of Pablo album cover font. Looks to me as if the font for the new album title “Reputation” is borrowed straight from the Nazi documentary Triumph of the Will, even if the feel of the cover as a whole resembles that of West’s. Perhaps Taylor or her graphic designer is deliberately trolling those who know she has some neo-Nazi admirers.

Having a few such admirers does not mean that Taylor Swift is a Nazi herself, of course—one of many distinctions that Katherine Mangu-Ward, editor-in-chief of the libertarian magazine Reason, complains people are too impatient to make these days.

People were relatively patient, though, at the recent debate at Cooper Union in New York City that pitted Mangu-Ward and her fellow Reason editor Nick Gillespie against two socialists: NYU sociology professor Vivek Chibber and Jacobin magazine founding editor Bhaskar Sunkara. The crowd stood in line for about an hour to get in and then listened politely for over an hour without bursting into protest chants or hissing, which is pretty good by contemporary college standards—though the overwhelmingly leftist audience laughed uproariously at (not with) several of Mangu-Ward’s pro-capitalist points.

The global consensus against libertarian, laissez-faire thinking is so strong now that you probably ought to donate to the brave souls at the Reason Foundation out of sheer pity even if you don’t agree with them. That thought went through my head at the annual Reason Dinner in Manhattan, mere days after the debate against Jacobin.

After all, the world is not going to be made sane or kept free by the more mainstream likes of CNN. Jake Tapper just defended CNN after it fell for yet another hoax claiming comedian Sam Hyde was responsible for a mass shooting. Tapper argued, hey, an “official source” said it was true. (To be clear, neither do I think this world can be rescued by the Reason dinner’s emcee, Kennedy, and her bosses back at Fox, about whom much more some other time.)

The world probably won’t be set free by Millennials, either, with half of them now saying they’d rather live in a socialist or communist country than in a capitalist one.

And it’s not simply that those Millennials are dumb or ill-educated, though most are. Brainy young intellectuals are turning against capitalism across the political spectrum, not just on the left. To my horror, when young editors from the leftist Dissent and Nation magazines debated editors from the pro-Trump American Affairs magazine this summer, they all found chummy common ground, despite their cultural differences, in their shared fondness for socialism—a sentiment shared by an editor from religious-conservative magazine First Things who attended the conclave of creeping authoritarianism.

Let’s agree to refer to the unholy union of First Things, American Affairs, and Dissent as the F.A.D. Coalition, in hopes that hastens the passing of this intellectual crisis.

(At least Julius Krein, founder of the Claremont Institute, which is cozy with American Affairs, denounced Trump after the alt-right’s embarrassing Charlottesville rally, but nowadays I assume it will only be a matter of minutes before any given faction does something idiotic that ought to discredit it forever.)

Reason, by contrast, can bring out the libertarian even in government workers. The main speaker at their dinner was the chairman of the FCC, Ajit Pai, and he not only argued for keeping the FCC and regulations in general out of the way of innovators and entrepreneurs, he used the libertarian comedy series South Park as a metaphor for doing so, recalling the episode in which the only way the town folk can gain the legal right to smoke pot is to deliberately give themselves cancer first.

Even no-good socialists sometimes end up on the side of freedom, though, especially if the authoritarian side in an argument features corporate villains—thus recent socialist outcry about a former FBI agent urging tech companies to censor “rebellious” political voices online. I hope the left will also turn against senators pushing the same sick, censorious message, such as Diane Feinstein and Al Franken, who’ve ominously been warning that unless tech companies start cracking down on anti-government or pro-Russian or otherwise unacceptable voices, the U.S. government will have to (as if they can’t help themselves).

More often, though, the far left does unproductive things like commemorating the 100th anniversary of the Russian Communist revolution on the fourth of this month—in protests organized by Bob Avakian’s fringey Revolutionary Communist Party. If I have to tolerate leftist protests, I’ll take the anarchist events of the fifth of November instead, thanks.

Luckily, neither generated much violence this year—there was arguably more shocking violence on the third, when libertarian-leaning Sen. Rand Paul got tackled and had a few ribs broken by a socialist neighbor in Kentucky. We don’t yet know whether Paul committed some specific transgression, such as messing up the neighbor’s lawn, to inspire this crime, but as Reason’s Matt Welch notes, that hasn’t stopped some journalists from giggling and gloating already.

It’s as if people are doing stress-tests to see how horrible and/or philosophically contrarian they can be in violating basic libertarian legal principles, not to mention rules of civility, and avowed libertarians aren’t the only ones who should be nervous.

The hammer-and-sickle communist tattoos have been multiplying in Brooklyn lately (though I’m told I talked one young couple out of having that symbol on their Facebook pages). Even a West Point graduate posted a photo recently of the Che t-shirt he wears under his uniform to show his support for communism’s eventual triumph—and for Colin Kaepernick.

To be clear, I’m not calling socialism the world’s only evil. You didn’t see me celebrating the 500th anniversary of the publication of Utopia last year, either, nor the 500th anniversary of the Protestant Reformation this year. Authoritarianism comes in many forms, all bad. Yet our selective outrage about history’s innumerable wrongs ends up leading to removing the George Washington plaque, of all things, from a Virginia church.

If history must remain a hopeless battleground of unsettled grudges and competing schemes of intrusive social control, maybe it’s best to look away from it in horror and contemplate the future instead. I just hope the future looks a lot more like the live-and-let-live attitude of Reason than like the angry revolutionary thinking that gives Jacobin its name. True, that anger comes in left, right, populist, and centrist forms nowadays, but that’s not the kind of consensus that leads anywhere harmonious or good.

—Todd Seavey is the author of Libertarianism for Beginners and is on Twitter: @ToddSeavey.