The former Soviet Bloc, then and now. 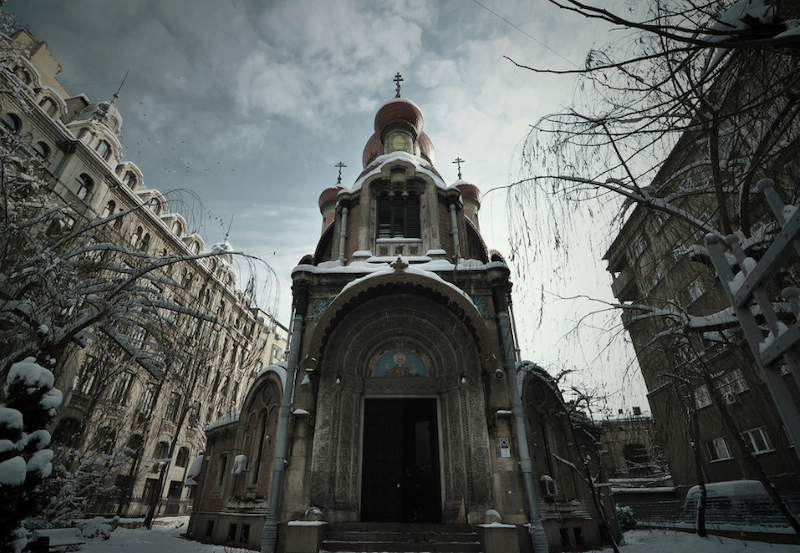 In Romania, all the 24-hour news channels dedicate a segment on mysticism to their viewers. It’s either an astrologer or numerologist talking about this and that—divining the future—from what to wear and how to act this month according to your sign in conjunction with the planets, to dissecting the birth charts of influential politicians. Entertainment and superstition gone berserk.

81% of Romania’s population identifies as part of the Eastern Orthodox Church, and less than a percentage of the population identifies as atheist or non-religious. So how is it that a country that experienced long decades of State Atheism is more religious and superstitious than countries in which religion and the state are intertwined (see the UK for instance)?

The reason mysticism and churchly attitudes (in many cases religious literalism of one degree or another among the older generations) are so prevalent is because they were never dulled to begin with. During the communist years, religion was suppressed, especially in the ‘80s during Ceausescu’s reign. The Orthodox Church had naturally adopted a tolerant attitude to the Marxist-Leninist worldview in efforts to “keep the peace” and preserve itself—while the Party’s ideological stance had switched from Internationalism to a type of Nationalist Communism.

Access to health care and education in rural places was limited, so that left local witch doctors and priests to handle the population’s needs for physical and psychological redress in the wake of ailments, accidents, and matters of the heart. Needs that should’ve been covered by the country’s health care and education systems. Old customs are hard to uproot even with the latter elements in place. Without them, it’s impossible.

Dissident preachers (of various denominations, Catholic, Orthodox, Baptist, etc.) were jailed and sentenced to labor camps, but the clergy overall was infiltrated (like numerous other professions) by the Communist intelligentsia. In other words, the secret service had rats in all walks of life. Ironically, Ceausescu and his wife Elena were superstitious too. It’s said that his wife had even employed the services of witches and soothsayers.

Dialectical Materialism was taught in schools. The lessons of “Scientific Communism.” Lots of fancy words. State Atheism was the norm. If it was scientific, why did it fail? The presence of creationism (in the minds of old and young) wasn’t the problem; it was the lack of debate. Pupils were told to memorize and repeat; they weren’t taught to think critically, to question and formulate answers. The State’s ambition to re-educate the masses and rid them of the opium of religion was doomed to fail from the very beginning. The communists chose the wrong means to achieve their aim. Do this. Think that. This method never works. People follow you so long as you exercise coercion; but once your power fades or vanishes, the people will embrace the opposite of what you told them to be true.

In Western countries, freedom of speech (though far from absolute) allowed citizens to form and express opposition to established doctrines and morals. Rational inquiry was practiced alongside critical entertainment (John Cleese, Larry Flynt, Stephen Fry, Hugh Laurie, George Carlin, and many others). There was actual debate. Heated debate. Amusing debates. Clear defeats and clear victories. Note that I’m not just referring to theism vs. atheism, but also religion in the sense of institutionalized faith. Institutionalized faith is inseparable from politics. In the West, free speech protected one’s right to criticize beliefs and practices. In the Communist bloc, that right ended when you neared the Party and the State. Your conclusions had to obey the Party line, or you were labeled a troublemaker.

Even radical empiricism admits the possibility of the existence of trans-empirical worlds or beings, but given our nature (as empirical beings), we may never know them. I may claim that certain alien creatures, which cannot be perceive via the senses, live inside my shoebox. Given the qualities I attached to them, you can’t prove from a trans-empirical POV that they don’t exist, and I can’t prove from an empirical POV that they do exist. These types of logical exercises were absent from the curriculum. There was no attempt to actually debunk religious myths—instead, the plan was to simply claim that religion was already debunked and that people will obey without question.

Marxists will surely attack me for saying this, but the Communists in power didn’t want a society free of religious superstitions. They wanted a society indoctrinated with a different kind of religion, an atheistic/materialist religion with the Party rules serving as the Bible and the Party Leader serving as the Messiah.

Ultimately, it doesn’t matter whether characters like Jesus, Mohammed, or the Buddha were divine or divinely inspired—it’s the messages they brought to the world, for the rest of humanity. We should keep the teachings worthy of preservation, and discard the unworthy. The selection process ultimately falls to our own moral compass. If religious texts and or preachers claim that God desires this and that of us, if those divine desires are in conflict with our own morals, then we choose not to follow that particular God or that particular message. Instead, we either embrace a non-theistic view of the world, or we embrace our own God, a reformed version of someone else’s God, which in turn was someone else’s version of an older idea.

Romania is not the sole former socialist republic to experience such a dramatic rise in religion and mysticism. This phenomenon occurred in the other former socialist states as well (Hungary, Russia, Poland). The Chinese Communist Party, for instance, has recently banned Feng Shui—an ancient Chinese metaphysical art of establishing harmony. I believe this ban will have profound perverse effects, and can’t understand why the Communists did this. Feng Shui is not about divination (like astrology, numerology, and geomancy), it’s about aesthetics. It contains supernatural motivations, but it’s hardly toxic compared to the aforementioned arcane practices.

Free and open debate would’ve improved the minds of children, and dramatically reduced the negative impact of mysticism and religious literalism (or borderline literalism) on society as a whole.