Athlete Privilege on Display in China

UCLA basketball players are allowed to shoplift without punishment. 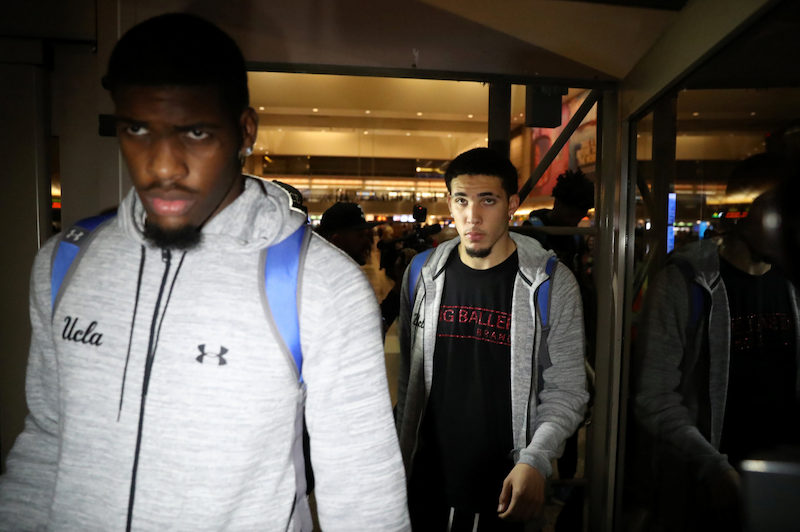 Lavar Ball was filming his Facebook reality show, "Ball in the Family,” in China last week when his son LiAngelo got arrested in Hangzhou for shoplifting at a Louis Vuitton shop. Normally a quote machine (he once said he could beat Michael Jordan one-on-one), Ball had little to say. “He'll be fine,” he said. “Everybody making it a big deal. It ain't that big of a deal." If it had happened in Los Angeles, it wouldn't have been a big deal, but China's a different story. There have been reports that LiAngelo and two teammates from the UCLA basketball team, who were arrested along with him, could’ve done some serious time behind bars for their offenses. Fortunately for them, Donald Trump arrived in China right after the incident and persuaded Chinese President Xi to arrange for their release.

ESPN’s Jemele Hill called Trump a white supremacist on Twitter a few weeks back, but she has yet to comment on his arranging for the release of three high-profile black athletes who’d committed a crime abroad. White supremacists wouldn't be happy to hear about these athletes being released. They'd think of them as disgraceful thugs rather than young people who'd made a mistake, as Trump did. This is a major sports story, but ESPN is barely covering it. The sports network hasn't given it the attention it did to the alleged defacing of LeBron James’ house with racist graffiti six months ago, and there's still zero evidence that it even happened. In that incident, LeBron compared himself to Emmett Till.

The mainstream media doesn't like this story much because it runs counter to their anti-Trump narrative. Had Obama intervened in a similar situation, there’d have been an outpouring of praise for a president who had great empathy. The arrest In China didn’t attract much media attention at all. Compare this to the hysteria when swimmer Ryan Lochte and three teammates had a drunken encounter at a gas station with some security guards during the 2016 Olympics in Brazil. Kristin Iverson, covering the affair for Nylon wrote of Lochte, "And here we are, making jokes and laughing at his actions, rather than seriously thinking about what it means that a privileged white male American can literally piss wherever he wants, lie about it, and fly away from his problems, when other people, who aren't white and aren't men, can be shamed... for not smiling enough while ‘The Star Spangled Banner’ plays.” Imagine being so stoked on righteous outrage that you actually believe that white men are so privileged they can urinate wherever they want to.

ESPN was very interested in the Lochte story. One of its headlines was “Dear Fellow White People: White privilege is a thing. And Rio was the perfect example.” This sounds like the announcement of a lecture aimed at all white people by someone who's trying too hard to sound woke, and it carries with it the unsupported assumption that race had anything to do with special treatment the swimmers received. As it turned out, most of Lochte's story was true, even though he exaggerated some things when he told his mother about it. He and his teammates were urinating after tearing a cheap advertisement off a wall, and then security guards held guns to their heads to demand payment for the damages. If they'd been black basketball players, the mainstream media would’ve declared that the guards would never have done that to white men. Ludicrously, the ESPN writer responsible for this article, Kevin Van Valkenburg, compared Lochte to Trayvon Martin, Tamir Rice, and Eric Garner.

Ryan Lochte and his crew got drunk and disorderly late at night in a foreign country. When athletes who work extremely hard have finished competing in an event as important as the Olympics, they sometimes blow off steam. The UCLA players, who were in China to represent their school, decided, totally sober, to steal expensive designer sunglasses. Who were the worse offenders? Had Lochte done this and then gotten released there would’ve been blood in the water for the media, and social media would have blown up over white privilege.

There's no media discussion about the tremendous privilege involved when you can intentionally break the law in a foreign country and face no consequences. Regular people busted for shoplifting in China have a serious problem, and nobody's going to get them off the hook. Maybe the lesson is to resist the kneejerk urge to grind the axe on a racial angle when such incidents occur. What Lochte and the UCLA players did and what then happened had nothing to do with race. A certain group should harp less about “privilege,” because as it turns out privilege exists in many forms. Maybe you shouldn't call people white supremacists without putting more thought into it, because they might surprise you, and maybe you shouldn't compare a drunken swimmer with a 12-year-old boy who Cleveland police officers shot to death.